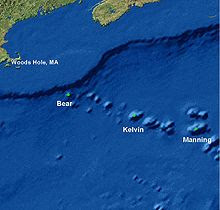 These seamounts are largely unknown except to a handful of specialists.  We really need a global effort to fully map and properly describe the ocean floor.  I have come to understand the proper extent of Lyonese, Atlanta and Poseidon only through effort and persistence.  They plausibly exist and are all essentially underwater.  Now we can check maps for important seamounts as well.  All need to be mapped for their existence within three hundred feet of the surface  at least.  All represent real stepping stones in the ocean.

The subsidence of the three named happened mostly in 1159BC.  Before then 12900 BP saw events that submerged the all important continental shelf where humanity had developed globally.  Thus seamounts were likely rather important and harbors may well be found there of great antiquity.

A measure of how difficult archeology can be is the SE coast of Spain.  Turns out it was spotted with sea level urban centers before 11259BC as it should have been.   First meaningful discovery took place a decade ago.  That was largely ignored.  Now this year remote sensing has picked up a hundred miles of deeply buried ruins.  Recall that the builders built pyramids at the least and ruins had to be inevitable.

Now do you think that they have found everything in the Azores?..
.
Hotspots & Cool Volcanoes: The New England Seamounts

If you drained the water from the ocean basins, some of the most dramatic features you would see are groups or lines of underwater volcanoes called "seamounts", sometimes in clusters and other times stretching across the ocean basin for many miles. Perhaps the best known of these is the Hawaiian Islands - Emperor Seamount Chain that stretches over 6000 km from Hawaii to near the Aleutian Islands west of Alaska. But there are also seamount chains in the Atlantic Ocean -- including the New England Seamounts. How do these chains of volcanoes form?

The bottom graph shows in red the height of the land and depth of the seafloor along the hotspot track. Blue lines show the seafloor depths surrounding the seamounts to emphasize the volcano heights.

In some places on Earth, even beneath the middle of tectonic plates, isolated plumes of hot material rise from deep within the mantle. These are called "hotspots." As the plume melts, it erupts to form volcanoes. The volcanic activity then dies down for a while, but the tectonic plate above keeps moving. When the plume erupts again, a new volcano forms on the seafloor. If this happens many times over millions of years, a line of seafloor volcanoes will be formed. This line of volcanoes records the direction that the tectonic plate was moving over geologic time. Sometimes, plates change direction. The bend in the Hawaiian Islands - Emperor Seamount Chain shows such a change about 35 million years ago.

The New England Seamounts, in the western North Atlantic, are the middle portion of a long-lived hotspot chain that extends from Canada to undersea volcanoes on the African tectonic plate. The volcanic activity that formed this long chain provides a history of how the North American and African plates have been spreading for over 100 million years.

There are about 25 large volcanoes that make up the New England Seamounts over a distance of about 1200 km, and they get younger towards the east. Bear Seamount, at the west end of the chain is the oldest of the New England Seamounts. It was volcanically active just over 100 million years ago. The youngest is Nashville Seamount, which formed about 80 million years ago.

The volcanoes rise from 500 m to several kilometers above the surrounding seafloor, and they are conical in shape, often with flat tops. Submarine landslides down the sides of many of these volcanoes have changed their shapes. There are also many smaller volcanoes both on the slopes of the major volcanoes and surrounding them.

Seamounts are also important because they harbor more marine life than the surrounding seafloor. More organisms can live around seamounts because the seamounts disrupt ocean currents and cause deep waters rich in nutrients to move upwards towards the surface. The currents also sweep the seafloor free of sediments in places, so organisms that need to attach themselves to a hard surface, such as deep-sea corals, can grow on the sides of seamounts. Scientists make the analogy of the deep-seafloor being like a desert for marine life, one that is interrupted by biological oases at seamounts.
Posted by arclein at 12:00 AM