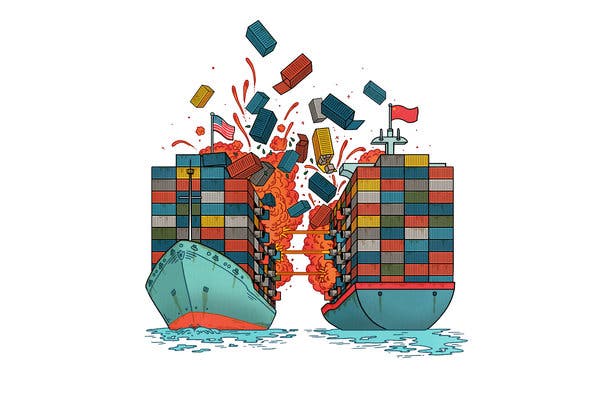 I hate to break this to you all but Trump very much thinks in terms of decades.  What he is breaking are decadal deals in which the USA is losing.   Recall he was in the building business in which every mistake is financed out to twice its original cost.

As soon as you understand that you can see what the prize will be and what has to be pushed now.  There are real problems that need to be engineered through, or we will be doing this again and again.  It may ultimately require fully engaging with India to rapidly advance its economy as well to counter Chinese trade tactics.

Yet now is a good time to put some lipstick on the pig and make something work properly.  Certainly a back off is due in terms of negotiations..
.

Why you should care

Because the global economy depends on this relationship.

The Donald Dossier: Cutting Through This Week’s Noisy News With What You Need to Know

This week, the world’s most important bilateral relationship will be renewed: President Donald Trump is set to meet with his Chinese counterpart, Xi Jinping. The setting is the kind of ponderous international grouping that Trump loathes: the G20. But he also appreciates the opportunity to perform on the world’s stage.

And what a performance it would be for Trump to reverse dramatically the course of his trade war.

Expectations from the global commentariat heading into the Buenos Aires summit, which begins Friday, are low. It’s hard to imagine much of a joint communiqué on issues such as world trade and climate change — topics on which Trump disagrees wildly with his peers. Remember, he scuttled consensus among the smaller G7 after a spat with Canada’s Justin Trudeau.

But the action will not be in what bland statement, if anything, 19 countries and the European Union can agree on, but in the leaders’ interactions. So Trump’s first meeting with Vladimir Putin since their odd Helsinki summit will be picked apart carefully, as will his interactions with Xi.

The two leaders could not be further apart in their domestic political standing. Trump, with a job approval in the low 40s and Robert Mueller’s investigation nipping at his heels, just saw his party lose control of the House of Representatives in a midterm election where Democrats delivered an 8 percentage–point shellacking. Xi’s Communist Party this year abolished presidential term limits — meaning essentially he will rule for as long as he likes — and enshrined “Xi Jinping Thought” in the country’s constitution. Such is life in a one-party state.

But when it comes to the economy, it is Trump who is negotiating from a position of strength. China has struggled to get a read on Trump, as the U.S. president started with tariffs on solar panels and washing machines in the fall of 2017 — and has continually added to the list since, with China responding tit for tat (or pork for steel). This meeting could be the last chance to calm tensions before U.S. tariffs on $200 billion worth of Chinese goods rise from 10 percent to 25 percent on New Year’s Day.

So far, the Chinese have gotten the rear end of the pig: China’s third-quarter growth was the lowest in 10 years, as domestic consumers are not picking up the slack for a slow in trade. Sectors from cars to smartphones are hurting.


Meanwhile, the U.S. economy has continued to surge, on pace for the best gross domestic product growth in 13 years. This gives American negotiators leverage to tackle rampant intellectual property theft, among other points of contention with the Chinese. That leverage could be fleeting, as American stock markets’ recent woes indicate. And American exporters — particularly in agriculture — are suffering real consequences from Chinese retaliation, and are continuing to pressure the Trump administration to lay down its trade arms.


There are plenty of incentives for a deal from both sides, but it will take overcoming entrenched visions about the world order: Xi sees China as the ascendant power that will one day claim hegemon status from the U.S., while Trump sees America’s foreign trade partners as continually trying to screw us. The biggest difference? Xi’s political horizon extends out at least a decade, while Trump, now more than ever, has 2020 on the brain.
Posted by arclein at 12:00 AM