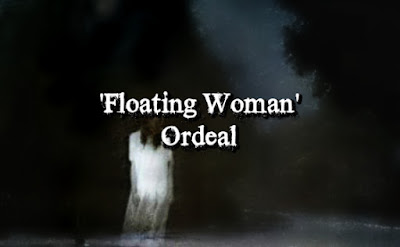 This really interesting because it repeated several times and the observers become acclimatized which reinforces the credibility of all the interactions.

The lighting suggests we are having excellent ability to handle the ultraviolet.  Thus we seem to be seeing a spirit being who is passing through for reasons of her own and his  whisper signaled his presence to her.  This led to her curiosity that led to the close encounter.

I've been watching the following scenario, hoping there would be a follow-up. First, I offer the original post on Reddit from 2 months ago:

This is kind of long, although the actual encounter only lasted about half a minute, but I have to describe the scene and whatnot. Thanks in advance if you're willing to read all of this.

So my husband is a major skeptic, and that's why I was shocked at what he told me what he saw last night (or actually- very early morning, between the hours of 3-5am). I kept trying to get him to admit he was joking, but he was dead-serious and assured me that he definitely saw something he couldn't explain.

He said he woke up and couldn't get back to sleep, so he went downstairs. This is not unusual for him; he often wakes super early and doesn't go back to sleep.

We live in a row of townhouses. Our downstairs is at a 2nd floor level, with our living room/dining room/kitchen area, and a sliding glass door that opens up to a small enclosed deck, and overlooks a strip of wooded area that makes up our backyard.

He was sitting in a recliner that is positioned directly across the room from the sliding glass doors, and with nothing but the tv on (to his right, in the corner next to the glass doors), he could see the outside clearly enough, although there is a reflection in the glass doors caused by the light from the tv. I hope that my description of the layout of the room makes sense.

After about a half an hour/45 minutes of watching TV, some movement outside caught his eye. He says he turned to look and plainly saw a woman floating several feet away from the deck, just hovering in his line of sight, right over our backyard. Maybe 8-10 meters from where he sat. He says she didn't seem to notice him. She slowly floated across our backyard towards the right (his right) until she disappeared from his view. He didn't get up to see where she went. He just sat there and tried to process it.

Since we live in a row of townhouses, and the area is pretty well-lit, I'm wondering how many backyards she traversed, and if anyone else saw her. Unfortunately, it would be super weird to bring this up with any of our neighbors. We've only lived here for a few months and don't know anyone well enough to ask them about something so bizarre.

I asked him for as many details as I could when he told me about it this morning. He felt he could rule out sleep paralysis or any sleep-related hallucinations, as he had been wide awake for some time. No drugs/alcohol involved either.

As for the floating lady, she was not close enough and it was too dark for him to see any details, but she appeared to be a humanoid, female figure with long white/light-colored hair and a slim build. Clothing appeared to be a light, wispy material. Possibly a gown, but again, the darkness and distance didn't allow him to see any details. She didn't glow or emit any light, and looked to be completely solid. So basically, my husband saw what appeared to be an otherwise normal-looking human woman, besides the obvious floating/flying thing, which he says made her seem "ethereal".

My husband says he's been lost in thought/walking around in a stupor today because he absolutely doesn't believe in paranormal stuff, but he can't explain what it was that he saw.

When he first told me about it, he identified it as a ghost. But after mulling over the details, the closest thing we could think to ID it as would be some kind of fae, maybe? It's hard to know what to call a strange lady hovering around your backyard at 3am. Any ideas as to what he could have seen are welcome. - ivywylde

Then there was a follow-up posted 2 days ago:

Well, he's seen her three times since. Every sighting occurred during the early morning hours (3am-5am), and he would be wide awake during this time. She wouldn't always appear in the same spot, but usually it would be around our balcony. She also never looked directly at him. I have never seen her, but a couple weeks ago I woke up and went downstairs with him, and he made me eggs and toast. I was sitting on the couch with him when suddenly he shout-whispered: "LOOK! There she is!" But it was too dark for me to see anything without my glasses, and he said she had vanished as soon as he said something.

Last night something very different happened. I fell asleep on the couch, but my husband was awake watching TV. Around 1:45am (earlier than usual) he shook me awake, and he was clearly upset. He told me she showed up again. He said he felt "strange", like he was being watched, and out of the corner of his eye, he saw her right next to him. This time she was standing on the seat of the couch, bent over, with her face inches from his. She vanished as soon as he noticed her, but he was still very shaken by the experience. He asked me to come over to his side and snuggle him (I had to sit right where she was standing, yikes). And when I laid my head on his chest, his heart was pounding.

I asked him if he wanted to go back to our room upstairs, but he said no. When he calmed down a bit, he told me that he felt like he might've scared her just as badly as she scared him. He thinks maybe she was just being nosey and went in for a closer look (reeeal close), not expecting to be seen. Which makes me wonder if she's done it before, and checked us out while we were asleep. Ughhhh...

Even though she scared the sh*t out of him, he feels like she's harmless, but I don't know. This last incident seems aggressive to me. I think I would feel a lot better if I knew WTF she is (Fairy? Alien? Hallucination?) and what she wants. But I don't expect to have the answers to these questions anytime soon, if ever. - ivywylde

NOTE: I believe that the husband may be a medium (thus, a beacon)...and that he has suppressed any thought of the unexplained until now. It was revealed that he had a STEM education, so that may be a factor. I have offered my help to the poster, if they seek consultation. Lon
Posted by arclein at 12:00 AM