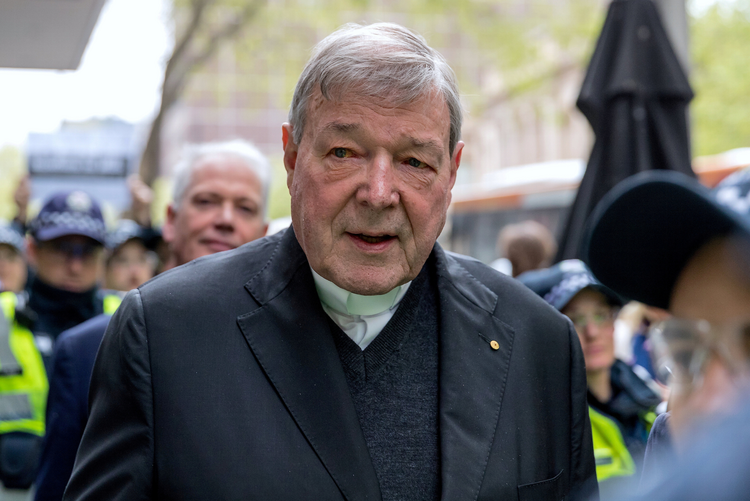 Not too many years ago, the West freed the queer boys and girls from continuous judicial assault.  That was good.  What we are seeing now is the various hideouts used by those once under threat been shaken out and we are seeing what they had been up to.
We discover aggressive homosexuality preys on vulnerable young men and boys of course. These victims often then go on to become perpetrators.  All this places the problem of mutual consent into a deep grey area twisted by the imbalance of power, just as sexual harassment does in the work place.
The Church will have to end the demand for celibacy and perhaps limit that to promotion candidates.  Considering the ample supply of divorced older men with a potential long lifespan, this may well solve itself.  The real problem is how to accommodate homosexuality at all except through legitimate celibacy, but that is exactly what has not worked.
We have not heard the details of this man's crimes, but perhaps that is as well. It will take little for our culture to slam the legal door back down on all this.  Instead we need to work with the natural community in order to resolve human sexuality safely..  .. .
Cardinal Pell, top advisor to Pope Francis, found guilty of ‘historical sexual offenses’

Australian Cardinal George Pell leaves the Melbourne Magistrates Court Oct. 6. (CNS photo/Mark Dadswell, Reuters) An Australian jury has found Cardinal George Pell, 77, guilty on five charges of “historical child sexual offenses” that go back decades, according to various media reports and confirmed by America. The 12-member jury gave their unanimous verdict in the County Court of the State of Victoria in Melbourne on Tuesday, Dec. 11.

The judge decided that the sentencing will take place in early February 2019 and released the cardinal on bail.

Little is known about the nature of the charges on which Cardinal Pell has been condemned because the entire trial and a second trial that has yet to take place are covered by a strict suppression order issued by the presiding judge, Peter Kidd. The order prohibits reporting on the case in any of the country’s media until the second trial has taken place to avoid prejudicing his case in both instances. The judge has prohibited the publication of the number of complainants in either of the two trials as well as the number and nature of the charges, except for the fact that the charges relate to “historical child sexual offenses.”

The cardinal is the most senior churchman yet to be convicted of such offenses, though he is not the third-ranking Vatican official, as some media have reported. His conviction is a grave blow not only to the church in Australia but also to the Vatican and to Pope Francis, who placed great trust in him by nominating the Australian prelate to his nine-member Council of Cardinal Advisors (he was the only cardinal from Oceania at that time, and Francis chose one cardinal from each continent) and by appointing him as prefect of the Secretariat of the Economy with a sweeping mandate to reform Vatican finances.

Cardinal Pell made great headway in those reform efforts, but he was not finished that work when he decided to return to Australia to respond to the allegations of historical sexual offenses. The cardinal has always maintained his innocence. Committal hearings were held in May at the end of which the presiding magistrate, while dismissing some of the most serious charges, ordered him to stand trial on the other charges.

His lawyers and the Victoria State public prosecutors agreed to split the charges against him into two trials: one relating to alleged sexual offenses committed at the cathedral in Melbourne (the first trial known as “the cathedral trial”) and the other for abuse said to have been committed in Ballarat, reportedly at a swimming pool (known as “the swimmers trial”). Yesterday’s verdict comes from the first trial. That trial began in September but the jury could not reach a verdict, and so a new trial began in November which resulted in yesterday’s verdict. The second trial is expected to take place early in 2019, probably around mid-February or early March, after the sentencing related to the first verdict has taken place.

Cardinal Pell’s conviction is a grave blow not only to the church in Australia but also to the Vatican and to Pope Francis.


The Vatican has not commented on the news of the cardinal’s conviction out of respect for the suppression order. On Wednesday, Dec. 12., the director of the Holy See Press Office, Greg Burke, responding to a question at a press brief in the Vatican about whether the cardinal would remain as prefect of the Secretariat for the Economy in the light of his judicial situation told reporters, “That is a good question.”

He then added, “The Holy See has the utmost respect for the Australian judicial authorities. We are aware there is a suppression order in place and we respect that order.”

Pope Francis told journalists in an airborne press conference earlier this year that he would speak only after the judicial process (which includes the possibility of appeal after sentencing) had run its course. Sources say the cardinal, who has always insisted in this innocence, will appeal.

The conviction of another Australian archbishop, Philip Wilson, was overturned by an appeals court, and sources believe the case of Cardinal Pell could follow suit.


Pope Francis has said he would speak only after the judicial process had run its course.

Pope Francis “granted Cardinal Pell a leave of absence so he could defend himself from the accusations” on June 29, 2017. Since then, the cardinal has been unable to carry out his responsibilities as prefect of the Secretariat of the Economy, a senior position in the Vatican, and as a member of the pope’s council of nine cardinals advisors.

Prior to his leave of absence—when allegations became public and some thought the pope should have removed Cardinal Pell from office—Francis applied the principle of law known as “in dubio pro reo” (“doubt favors the accused”), insisting that a person is to be considered innocent until proven guilty. The pope did not remove Cardinal Pell from his Vatican posts then because he believed to do so would be equivalent to an admission of guilt. Francis explained his stance in a press conference on the return flight from World Youth Day in Poland, July 31, 2016. He said: “We have to wait for the justice system to do its job and not pass judgment in the media because this is not helpful. ‘Judgment’ by gossip, and then what? We don’t know how it will turn out. See what the justice system decides. Once it has spoken, then I will speak.”


Pope Francis’ words make clear that he does not intend to speak until the judicial process, including a possible appeal, has ended. He has, however, terminated Cardinal Pell’s membership of the council of nine cardinal advisors, Mr. Burke, indicated on Dec. 12. Mr. Burke revealed that at the end of October, the pope sent a letter thanking Cardinals Pell, Francisco Javier Errazuriz (Chile) and Laurent Monswengo Pasinya (Democratic Republic of the Congo) for their work in his council of cardinal advisors over the past five years.


Cardinal Pell could decide to hand in his resignation as prefect of the Secretariat for the Economy, since it is unlikely that his second trial and an eventual appeal will have taken place by the time his five-year term as prefect expires on Feb. 24. The cardinal, who will be 78 in June, could also resign from his other roles in various Roman Curia departments and offices. Currently, he is a member of the Congregation for Bishops, the Congregation for the Evangelization of Peoples, the Congregation for the Institutes of Consecrated Life and the Societies of Apostolic Life and the Pontifical Council for the Promotion of the New Evangelization.

Regardless, Cardinal Pell is not allowed to carry out any pastoral ministry in public until the whole judicial process has ended, and then only if the verdict is in his favor.
Posted by arclein at 12:00 AM