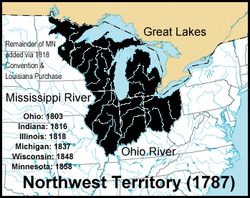 Been Canadian centric, I had not understood just how much the Natives had been engaged at the same time throughout the whole western frontier.  This may well have been a secondary US purpose, but it was hugely advanced and ultimately persisted without British intervention until ethnic cleansing had been completed East of the Mississippi.  Considering the sound economic state of many of those tribes, this was a tragedy.

It was  a British sideshow that brilliantly secured the Northern Frontier and ultimate security.  For the Americans it ended in the face of the real threat of freed British regiments arriving in force which was certain to first restore an alienated New England to the Empire along with the old Northwest.  Peace staved of pending disaster.

Yet the British wanted none of that having been engaged in a full scale global war for a generation.

The point behind the war of 1812 was cultural resonance: in Britain, we had beaten Napoleon, we came back and won Waterloo… nobody cared about a little war with pocket sized forces. In the USA, it meant something entirely different. It has been dressed up as “the second war of independence” (which it certainly wasn't) and the old “We wun cuz Nawlins" line never helps either!

In essence, the American victory was in feeling they could stand toe to toe with the world heavyweight champion (who had his back to them and one hand tied, to be fair) and not getting beat. But also there were four sides; Britain, Canada (not an actual country then but with its own identity), America and the native Indians. Now, go tell a Canadian he lost and he'll laugh in your face. Ultimately, the war was an American land grab on Canada which failed dismally..

But look at the American wins against the Indians, almost a concurrent war than the same war, and they also took a lot more land south and east. America won that bit, but not against the British.

So we're talking about different wars. Britain and Canada won in the north against America. America won in the south against the Indians. In the middle, it was a bit confusing, but the battle of Bladensburg, the raid on Baltimore and ultimately New Orleans were designed to draw the war south away from the Canadian border, which worked, and to bring America to the peace table, which also worked..

The causes of the war (mainly impressment) had all been resolved before a shot was fired. That was a flimsy reason for a land grab. The treaty of Ghent was status quo ante bellum, which was the entire British aim, so ultimately, Britain achieved its desired end state and the USA did not..