Huge 'Pterosaur' Observed at the Vermilion River in Danville, Illinois 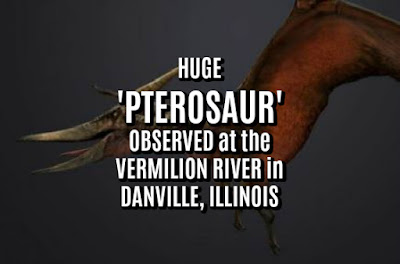 This appears to be a very reliable eye witness.  Better yet the creature is hugging the river as has been observed in the past.  I do think that it feeds of fish and that it slides into the water to do this. So we actually have subtle conforming evidence here unlikely to be made up.
We have collected a literal menagerie of larger cryptids that seem to be adept in not showing their presence, though mostly because they are nocturnal.  They all seem to have large hunting ranges though that is not proven.
I have only just understood that our so called chupacabras must hunt in groups to fully drain a cow..


Huge 'Pterosaur' Observed at the Vermilion River in Danville, Illinois

I recently received a telephone call from an eyewitness ('DF') who was referred to me by an associate.

In the spring of 2013, DF was on his property at the end of Ave. F near the Vermilion River in Danville, Illinois. It was around 4pm on a warm sunny afternoon. The property extended back to the edge of the river. DF was busy clearing brush and trees on the bluff overlooking the river. Many times he would ride his ATV to the location, then sit and watch a variety of wildlife along a game trail.
There was also a dock on the property.

On this particular day, DF was taking a break from his work. After a while, he noticed that the regular sound of birds had suddenly stopped and it became usually quiet. DF said that he has always been very quick to pick-up on movement, since he has ridden a motorcycle everywhere he went, and needed to be aware of his surroundings.

As he stood on the bluff looking out onto the river, he noticed a large shadowy figure gliding downstream towards him. As it got closer, the bizarre creature became more defined. He observed, what he described, a 'pterodactyl' gliding about 4-5 feet above the surface of the river. DF estimated that the wingspan was approximately 25 feet, as it covered half the width of the river. The huge flying being looked exactly like the images of the prehistoric flying dinosaur. Long beak with a long ray on the head. Dark gray leathery-skinned body and wings, with a long tail that flattened on the end. It made little sound, but cast a shadow on the river as it flew just below the height of the bluff. The water swirled as it glided past. The beast continued gliding downstream until DF lost sight of it. He stated that it never flapped its wings. DF's first reaction was to get back to his house and tell his wife what he had seen.

Over the years, he mentioned the sighting to a few close friends, but it never went beyond that. He moved from the location about a year later.

NOTE: I was impressed by DF's demeanor and description. He stated that he has never witnessed anything unusual before or since that day. Historically, much of Illinois is known for flying cryptids sightings.WHile investigating the Chicago winged humanoid reports, our team also received a variety of flying cryptids sightings as well...including pterosaurs and large-winged birds. Danville is approximately 100 miles south of Chicago, near the Indiana border. Lon
Posted by arclein at 12:00 AM