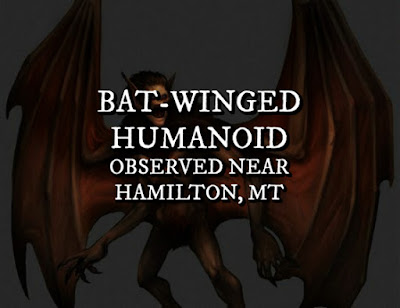 Interesting item in which the observer thinks that the sonics he was putting out affected the giant bat.

We have specifically covered what are essentially giant bats usually mistaken for Chupcabras and/or gargoyles.  So this certainly conforms to what we have so far and supports the Bat conjecture for all of it along with its harvesting of arterial blood.

Also it is part of the Great Plains and the huge herds of cattle that are available.

I wonder if a single bat can feed of a single cow without killing it?  That actually makes sense as a cow has around ten gallons of blood.  Most likely the dead cows were bled by a whole flock who mostly took turns draining the blood.
.

This account took place in 2010. I was living in Hamilton, Montana with my current girlfriend. It was late at night and my friend and I would always go for a drive. We parked at an empty parking lot outside of a gym that was on the outskirts of town. My friend had his medical marijuana card and he would smoke while we talked about random sh*t (we worked together, workplace drama was usually the discussion). After we were done hanging out I started my car to head back into town. We started heading towards the outlet to take a right onto the main street. I was about 50 feet away from the outlet when I decided the mood called for some loud music (genre was rap and I can't, for the life of me, remember the song that was playing right at that moment). To give you an idea as to what our field of view was, the outlet had two white fences on each side that spanned the property. It was one of those fences that had two logs with spaces in between them so vision was partially blocked on the right and left side (granted it was pretty damn dark).

That is when sh*t hit the fan. Out of the corner of my eye I see what appeared to be a dusty brown ball of plastic or garbage that rolled into view from the other side of the right fence. We were driving closer as this was happening but as soon as I got a better look, I knew this was not a piece of garbage blowing in the wind. I immediately realized it was a winged flesh-like creature that appeared to have crash landed during flight. I thought my eyes were deceiving me and I immediately turned to my friend who let out one of the most blood curdling screams I have heard in my entire life. I kept looking at him and looking back at this "thing." My friend was so scared he flew his legs into the air (up against the passenger window and windshield) as if that would shield him from this creature we were approaching. I kept repeating, "WHAT IS THAT, WHAT IS THAT?" As soon as the creature came to its senses it planted its feet and took off flying in the opposite direction of my car. At this point I stopped the car and all I remember is heavy breathing from both my friend and I (from the adrenaline) as we watched the silhouette of this thing fly away. The wing-span on this creature was at LEAST 6-8 feet wide. It seemed to have webbing like a bat (no feathers). We watched it until it was not visible, which took a good while (Montana still has a decent amount of light pollution and we could see the contrast of this creature in the sky for 2-3 minutes before it disappeared).

I remember my friend told me, "Please just take me home." We took off and headed back into town. I just kept asking, "What was that, what was that?" I don't think there were more than a few words spoken between us at that point. I just kept asking, "What was that, what was that?" He would respond with, "I don't f*cking know man." I dropped him off. I went home and told my girlfriend who was laughing at how animated and serious I was when telling her what happened. The next day, I woke up and immediately called him. I asked him, "What did you see?" I wanted him to tell me first so that what I had to say did not influence him in his recollection of this creature. He told me, "It was a flesh-like creature, it was not a bird, there were no feathers." I asked him, "What color was it?" He told me, "Brown-ish and...." I said, "sort of grey?" He said, "OMG, yes."

I no longer talk to this friend as he slipped into a unfortunate issue with prescription pills. I wish we still had a friendship as I have wanted to talk to him about this event since it has happened. We both saw the exact same thing, we both nearly sh*t our pants. I am the type of person to laugh in the face of ghost/paranormal stuff. If I don't see it, I don't believe it. I still to this day cannot explain what I saw. I still get chills when thinking about my friends scream. The way I describe this thing is a gigantic bat/humanoid with wings. There was not one feather on this flying creature (I mention this because anyone I tell this story to tells me I probably saw a bird of some sort). I remember this creature being slightly hairy.

My theory as to why it was rolling around on the ground as if it crash landed out of the sky? I think my sub woofer/sound system might have messed with its navigation and that is another reason I feel it might have been a gigantic bat. This is by far one of the craziest stories I have to tell that I personally experienced. Can anyone help explain what I might have seen? Has anyone had similar experience with gigantic bat-like creatures?

Edit: It might be worth mentioning Rocky Mountain Labs is in Hamilton, MT. This is one of the highest security laboratories in the world. My ex-boss's ex-husband works there and the only thing she knew about this job was that he took care of the animals. The deadliest diseases are held in this lab and there are monkeys and other animals that are used for testing. SC
Posted by arclein at 12:00 AM