A new 'spin' on kagome lattices 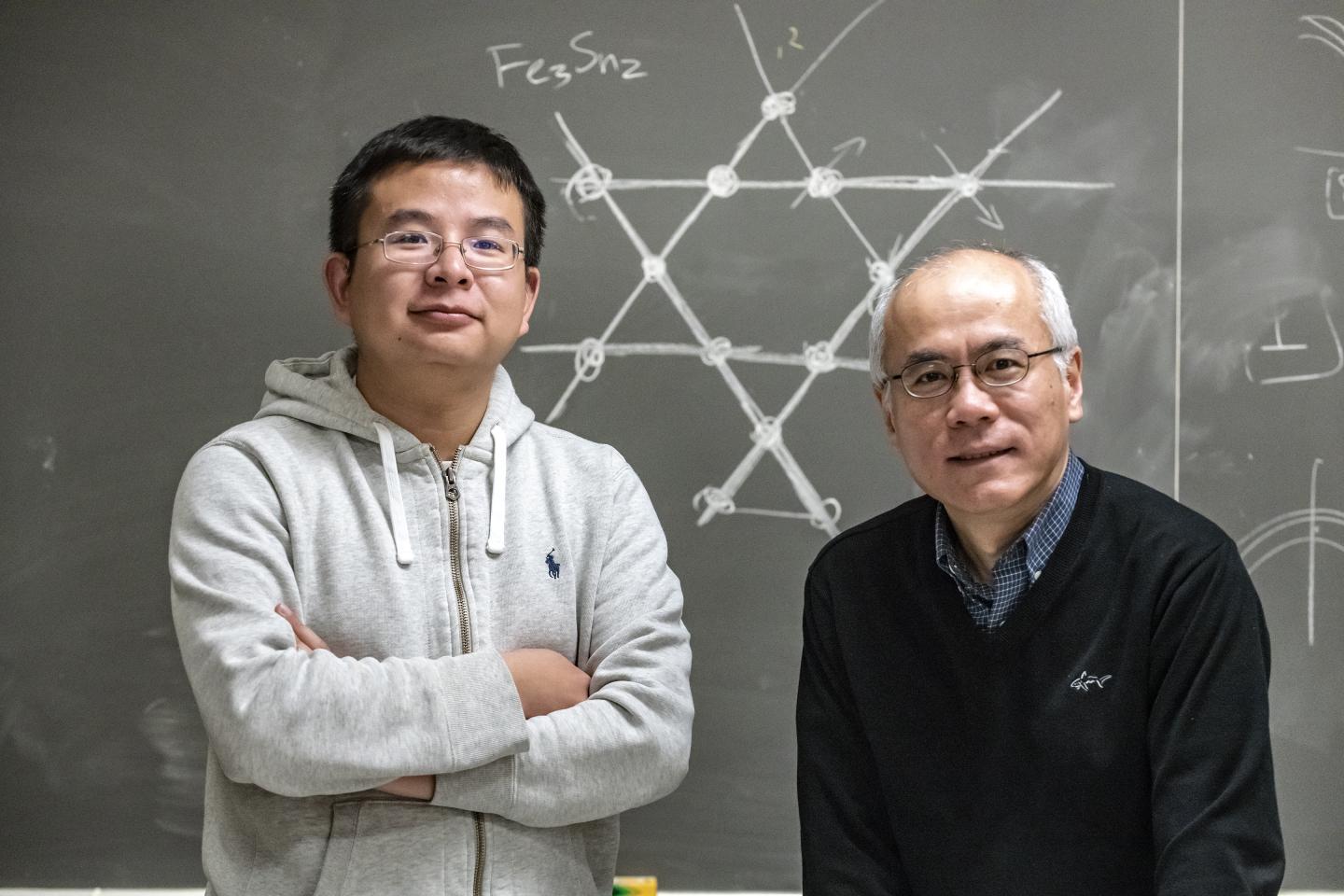 Interesting and appears to be truly powerful.  Yet applications are likely a long ways out.  Right now it is a potential toolbox.
At least we know it exists and can track it.
All good in terms of our future toys.
.

A new 'spin' on kagome lattices


Credit: Lee Pellegrini/Boston College Chestnut Hill, Mass. (12/7/2018) - Like so many targets of scientific inquiry, the class of material referred to as the kagome magnet has proven to be a source of both frustration and amazement. Further revealing the quantum properties of the kagome magnet is seen as one of the primary challenges in fundamental physics - to both theorists and experimentalists.

An unusual underlying geometry of the atomic arrangement is central to the value of these materials. Kagome lattices are described as intersecting webs of "corner-sharing triangles" and are prized for the unique behavior of the traversing electrons, fertile ground for the study of quantum electronic states described as frustrated, correlated and topological.

A recent study by an international group of researchers, published in the journal Nature, found the kagome ferromagnet Fe3Sn2 exhibits an electronic state that couples unusually strongly to an applied magnetic field that can be rotated to point in any direction of a 3-dimensional space, revealing in quantum scale a "giant" magnetization-driven electronic energy shift taking place within the material.

"We found out two things. The first one is that the electronic state of Fe3Sn2 is nematic, a state that spontaneously breaks the rotation symmetry. The electrons behave as a liquid crystal inside this magnet, presumably due to the strong electron-electron interaction," said Wang. "The second thing we found is you can manipulate and make big changes to the electron energy structure through tuning the magnetic structure by applying a magnetic field."

The team - which included researchers from BC, Princeton University, Chinese Academy of Sciences, Renmin University, and Peking University - used STM and vector-magnetic-field tools to identify the spin-orbit coupled electronic properties of the kagome ferromagnet and explored the exotic phenomena within it, while performing modeling and calculations to provide theoretical interpretation and understanding of the observed phenomena.

"What our colleagues found is that by changing the direction of the magnetic field, they saw changes in the electronic states that are anomalously large," said Wang. "The shifts of the bands - there are band gaps, forbidden regions in quantum mechanics where electrons cannot reside - those regions can be tuned enormously by the applied magnetic field."

The "band shift" is a change in electronic band structure, said Wang. It expands and narrows the band gap depending on the magnetic field directions. The kagome ferromagnet showed a shift approximately 150 times larger than ordinary materials.

Probing the interference patterns of the electron's quantum mechanical wave functions revealed consistent spontaneous nematicity -- an indication of important electron correlation that causes the rotation symmetry-breaking of the electronic state in the material.

These spin-driven giant electronic responses indicated the possibility of an underlying correlated magnetic topological phase, the researchers reported. The tunability of the kagome magnet revealed a strong interplay between an externally applied magnetic field and nematicity, providing new ways of controlling spin-orbit properties and exploring emergent phenomena in topological or quantum materials, the team wrote.

The giant magnetic field tunability of the electrical properties may one day lead to potential applications in electronic devices such as memory and information storage and sensing technologies, said Wang.

"What's exciting in these results is the potential of realizing something useful," said Wang. "This is coming from very fundamental physics, but it may one day connect to applications. We don't understand everything, but we now know this is a material that contains all these important ingredients."
Posted by arclein at 12:00 AM