Have We Reached Peak Soros? 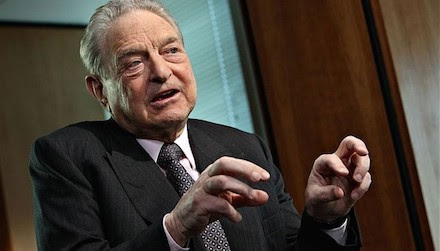 This is a fair question particularly as he has not clearly understood that the Q movement has specifically weaponized the American People against him and many others globally as well.  One morning you wake up and find yourself in a bullseye.

Soros is and always has been a trader and traders are ultimately cowards.  Remember that for now sooner or later he must run for his life.  It has been a great run  but founded on something that no one can truly understand.  He made his fabulous fortune betraying the gentlemen who let him in the door and in the process damaged England itself.   He will never see it that way but i do not need to interview contemporaries to discover all that.  The answers are inevitable.

Since then he made short currency bets and launched apparent revolutions to collect.  There was no power able to stop him and his partners where surely the Global DEEP STATE.

So yes we may well be looking at the last days.

Have We Reached Peak Soros?

All around you, if you look closely enough, you will see the spectre of George Soros lurking behind the headlines. The caravan, net neutrality, regulating Facebook, the de-platforming of independent media, color revolutions and election meddling, refugee creation and manipulation, the trolls on Twitter, your blog and YouTube, etc.

All of these things we see in the headlines today are a product of George Soros’ money and his singular obsession with re-creating the world in his image.

Soros himself is a product of the times. A multi-billionaire who could only exist in an era of unprecedented corruption of the basic foundations of society. An age where the dangerous mix of Marxist ideology governs the somewhat unfettered free flow of capital has resulted in the mother of all bubbles in making money on money.

A primary thesis of this blog is that corrupt money begets a corrupt society. Corrupting the prices we pay for the things we buy dissociates us from their true cost of ownership and the opportunity costs of making different choices.

It has given rise to a seemingly all-powerful class of money-changers who manipulate policy to arrogate unearned wealth to themselves, known as rent, and then use that new wealth to fund their next scheme to fleece people of their time.

Because the aphorism is true, time truly is money. Time is the only true scarce natural resource. Everything else is, ultimately, recyclable, just ask Einstein.

And men like Soros understand that filling your time with distractions keeps you poorer than you would be otherwise. This is the main mechanism by which they steal your wealth.

The process of political and ideological radicalization that his NGO’s excel in are part of this scheme. Get the people outraged over irrelevancies, emotionally charge them up and then set them against each other until the political system breaks.

Even when it fails ultimately, like in Armenia, it succeeds in wasting a year of millions of people’s lives. Time lost to the machinations of a madman.

How much time to we as Americans spend worrying about the issues du jour concocted by Soros and his cohort Tom Steyer? And the sad truth is that we need to worry about these issues, even though the costs are high.

Because Soros’ goal is the destruction of the United States and what it stands for. He is chaos incarnate continually using his money to stoke conflict which ends in a Hobson’s Choice for us, damned if we do, damned if we don’t.

The Face of Hobson’s Choice

That choice today is one between a Facebook and Silicon Valley that has way too much power over governing our speech, hiding behind broadly-worded EULA’s or accepting regulation of them for abusing their power.

Think about how egregious the treatment of conservatives and alternative press is at the moment. It’s completely one-sided. Now ask yourself the obvious question.

Why would they do this knowing it will result in people getting angry and calling for something to be done?

Because, lightbulb, that was the plan all along.

Notice how today Jack Dorsey of Twitter and Mark Zuckerberg of Facebook are being set up to be the fall guys for this situation. If you can’t see at this point the man behind the curtain pulling the strings on this to achieve this very goal then you aren’t wokeor red-pilled. You are part of the problem.

You are just another of George Soros’ useful idiots.

Governments on both sides of the Atlantic are lining up now to make Zuckerberg into the villain for not answering the their concerns over Facebook’s data handling.

Zuckerberg is the patsy.

And Soros will get what he wants: compliant, paid-for, bureaucrats and politicians ramming through legislation that gives them oversight into social media platforms to regulate not only their behavior but yours.

If that’s the case then why do I think we’ve reached Peak Soros?

Because none of this is working anymore. Look around you. Just this week, out of nowhere, Soros’ Open Society Foundation packed its bags and left Turkey after its founder was arrested for fomenting dissent.

Last month OSF and his Central European University pissed off out of Hungary where Viktor Orban put his foot down against Soros’ malign influence on Hungarian culture.

The Russians threw him out years ago and there’s an arrest warrant out for him there.

He fought these latter two countries for years before finally leaving.

And OSF pulls out in a day?

Reason? They are guilty and Soros is losing his cover. Everywhere where opposition to globalists is hardening Soros is pulling up his tents and running away.

Bullies are weak. Soros hides behind the venal and the vane. He’s never built anything of value, only won a rigged version of a zero-sum game, i.e. currency trading.

He’s not an entrepreneur, he’s a vampire. And vampires don’t build things, they destroy things other people love while being unloved themselves.

The overthrow of the government in Armenia didn’t go as planned either, as Nikol Pashinyan failed to form a government even after he gave lip service to remaining a friend to Russia. No one bought that line and Pashinyan’s people’s revolt has left a a vacuum in its wake, but one that won’t be filled with a Eurocratic stooge under Soros and NATO’s control.

But most importantly, fewer and fewer people are falling for the Hobson’s Choice I described earlier that Soros gins up to move the political ball in his direction.

Now, instead, he is resorting to openly backing voter fraud in Broward County and Georgia. He’s paying protesters to harass Senators over a Supreme Court nominee and organizing a violent storming of the U.S. southern border which is quickly becoming a political albatross around the Democrats’ neck.

Lies are expensive. That’s why men like Soros need so much money.

It’s why they continue to also manipulate markets, sow discord and volatility at the same time that they push open conflicts which rightly scare rational people half to death — like Ukraine’s ham-fisted attempt to draw Russia into a shooting war in the Kerch Strait.

Their lies are being debunked in real time. I’ve said before. These men may be the smartest men in the room but the are not smarter than the room itself. From here on out for George Soros and his ilk in The Davos Crowd victories will get more expensive and losses harder to overcome.

This is why control over the flow of information, control of The Wire, as I talked about recently is so very important. It’s why decentralized platforms are so important and why personal connections we make here in the cyber-world need to be anti-fragile.

It’s also why we’ve reached Peak Soros.
Posted by arclein at 12:00 AM