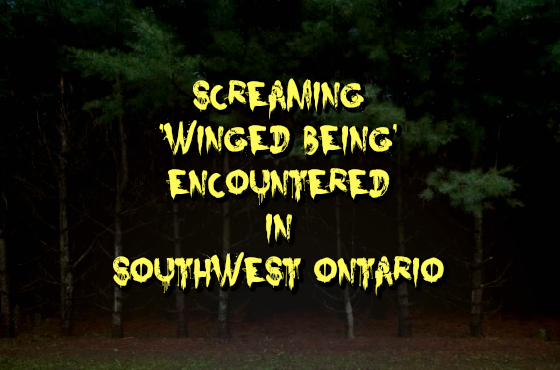 This is actually near Red Lake  close by Thunder Bay on Lake Superior.  We do not get detail here and it could be anything or something new.  It did depend on gliding to leave the cabin.

Way more important this is a heads up eye witness report of an actual disappearance.

This is surely accomplished by jumping back or forward in time when no one could witness it.  This report is too clear to excuse with artificial means.  Yet he was also diving as well and that posisbly was into an horizontal worm hole entrance not observed.

So another possibility is opened up.  We are leaving the Wild pretty quick here though.  A substantial part of the more unusual sightings are plausibly alien creatures rigged up for excursions on Earth..

Sir - I heard you on 'Paranormal Horizon' radio last night, and tried to call-in but the show was ending. You were talking about inter-dimensional creatures. I believe I saw something that may fit that bill.

In July 2011 my wife and I were spending a weekend at a friend's cabin, about 15 kilometers north of Manitou Falls, Ontario, Canada. We were both sitting on the porch looking into the woods. There were two spotlights shining off the porch, so the woods and the open area in front of the cabin were well-lit. I had spent a lot of time in this general area as a boy, and I was aware of the wildlife that lived there.

It was close to midnight, as we sat and talked. It was a very mild still night, but for some reason the usual sounds of the woods were subdued. I wasn't alarmed, but it did seem strange. Sometimes when a Lynx hunts at night, things do quiet down; so I assumed that may be what was going on. I kept my eyes open just in case another predator was about. Eventually my wife wanted to go inside, so I obliged her and followed. I left the porch spotlights on. We went to bed around 1:30 AM and both of us quickly dozed off.

The next thing I remember is my wife shaking me, telling me to wake up. She said she had heard a 'scream' coming from the from of the cabin. She wasn't used to being in the outdoors, so I told her it was either an Owl or Lynx. She insisted that no animal could have made that terrible noise; that it sounded like a woman was in distress. I looked at my phone. It was 2:33 AM. I got out of bed and walked into the front living room. I looked out the window, but didn't see anything. She was right behind me. Then the scream pierced the night again. This time I definitely heard it, and it wasn't like anything I've ever heard before.

We stood by the cabin window and watched the woods. About 10 minutes later, we heard something on top of the cabin porch roof. It sounded like it was jumping up and down. It was so loud and forceful, I thought it may go through the porch roof. We continued to watch, when all of a sudden this huge winged creature jettisoned from above towards the woods. It was massive and dark in color. The wings were fully open and not moving; like it was gliding towards the trees. We caught a decent look of this creature as it sailed upwards into the dark sky, then descended back towards the edge of the woods. It performed this maneuver two more times, until it came streaming, and screaming, towards the open ground in front of the cabin; and then vanished! The wings had been tight against the body and it looked like a dark missile about to slam into the clearing, but disappeared before it hit the ground!

We both jumped and let out a huge gasp. It was the most shocking experience I had ever had. My wife was wide-eyed and had to sit down. What in the world was that thing?

I have tried to comprehend what we witnessed that night, and I still have no idea as to what it was. It had arms and legs like a human, but the body was scrawny and flexible. It's hard to describe. The head was barely visible. Overall, I'd guess it was 4 feet or so in height and the wide billowy wings spread out to at least 15 feet when fully extended. The scream was the most memorable part of this experience. It really did sound like a frightened woman, but the decibel level made our ears uncomfortable.

A few days later, I asked my friend if he had ever seen anything unusual at the cabin. The most exciting event he could recall was a Badger getting into the kitchen one night. That was the extent of it. I decided not to go into details with him, but did say that my wife and I had an eerie night and that we didn't get much sleep because of strange noises coming from the woods. He just shrugged his shoulders and said nothing.

Do you believe that this flying creature actually disappeared into another reality, as you mentioned in the show? I appreciate your thoughts. JK

NOTE: I talked to 'JK' by telephone. He currently lives in North Dakota. His encounter left a lot of questions, of which he has few answers. He was positive that this was a corporeal creature and that both he and his wife were not hallucinating. Could it have been a winged humanoid or unknown flying cryptid. By the description, it seems very possible. Anyway, it'll be interesting to see if any further reports come from the general area. Lon
Posted by arclein at 12:00 AM