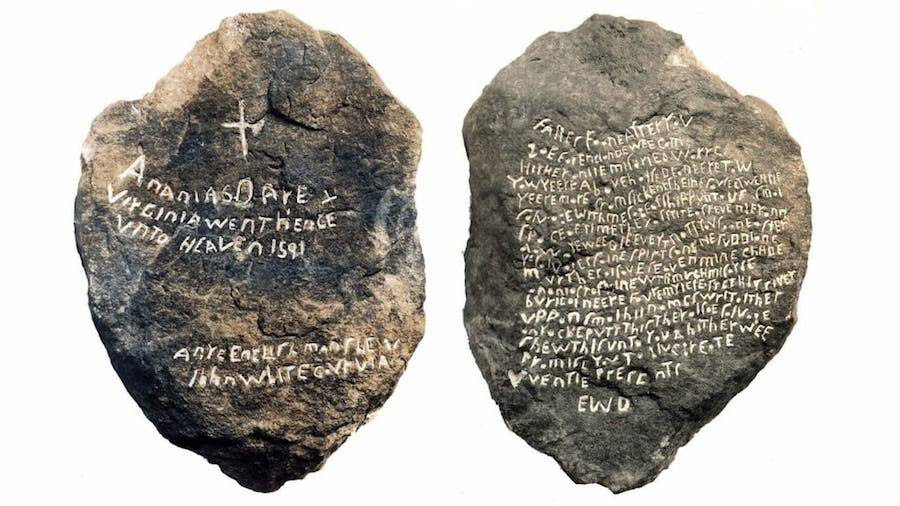 No fraudster could correctly fabricate a long text from a centuries old artifact.  At best they throw out a scrap.  And just where is the fraudster, but appearing after the first legitimate discovery?

The same spurious argument has also been used against the Kensington stone as well.   Folks in the past did want to leave readable messages and spending hours to prepare a stone was really the only way.  Thus a grave monument is pretty ideal for exactly this.

In the event we are finally getting the problem correctly revisited and it does settle the likely end game for the Roanoke colony, which certainly needed to be abandoned in any event..
.

By Kara Goldfarb
This stone tells a dark tale of war, suffering, and murder — but is it legitimate or an astounding forgery?

Brenau UniversityThis stone’s inscription may hold a message from the Lost Colony of Roanoke.
“If this stone is real, it’s the most significant artifact in American history of early European settlement,” said Ed Schrader, a geologist and president of Brenau University in Georgia. “If it’s not, it’s one of the most magnificent forgeries of all time.”

The artifact that Schrader is referring to is a 21-pound engraved stone that, based on the results of upcoming testing, could perhaps solve the mystery behind the “Lost Colony” of Roanoke that has puzzled historians for centuries.

This mystery involves the creepy disappearance of more than 100 English settlers from the colony sometime between 1587 and 1590 — and the stone may finally help explain what happened.

An overview of the history of the Roanoke Colony.
The story of the “Lost Colony” begins on July 4, 1584, when English explorers landed on Roanoke Island in present-day North Carolina. The explorers were unsuccessful in establishing a settlement, so a larger group led by a man named John White was sent there in 1587.

Among the 117 colonists were White’s daughter, Eleanor White Dare, and her stonemason husband, Ananias Dare. Eleanor and Ananias soon had a daughter, named Virginia, the first English child born in the New World.

Low on supplies, the group soon found themselves in a desperate situation. John White then traveled back to England for reinforcements later in 1587, but the outbreak of the Anglo-Spanish War delayed his return.

When he finally managed to get back to Roanoke more than three years later, in 1590, the settlement was entirely deserted with no remains in site. The only clue as to what had happened was a fence post with the word “Croatoan,” the name of a neighboring Native American tribe, carved into it.

And that was the last we’d heard from the colonists of Roanoke — until 1937, when a tourist from California walked into the history department at Atlanta’s Emory University with the massive stone that Ed Schrader and others now think might be the most important artifact of the early American period.

On one side of the stone, which the tourist said he’d simply found in a swamp while traveling through North Carolina, the writing appeared to constitute a grave marker reading, “Ananias Dare & Virginia Went Hence Unto Heaven 1591 Anye Englishman Shew John White Govr Via.”

The engraving on the other side of the stone, however, was much longer. As a team of Emory scholars deciphered the message, they were shocked to discover the story that it told, one describing two years of suffering due to sickness and war with local Native Americans that led to the death of virtually all of the colony’s settlers, including the writer’s husband and child.

This story referred to John White as “Father” and, sure enough, was signed “EWD,” the initials of Eleanor White Dare. It looked as though Eleanor had left behind the story of the Roanoke Colony and more or less settled the mystery of the settlers’ mass disappearance once and for all.

Indeed, the Emory team initially declared that the stone was authentic. However, within the next few years, a Georgia stonecutter found more than three dozen stones also claiming to have been written by Dare and which were also soon deemed authentic.

Then, in 1941, the Saturday Evening Post ran a devastating 11,000-word exposé debunking the legitimacy of all the stones as a hoax and revealing the Georgia stonecutter to be a fraud thanks to various evidence.

Just like that, one of the most astounding discoveries was transformed into a pile of rocks and sent to sit in a basement at Georgia’s Brenau University. 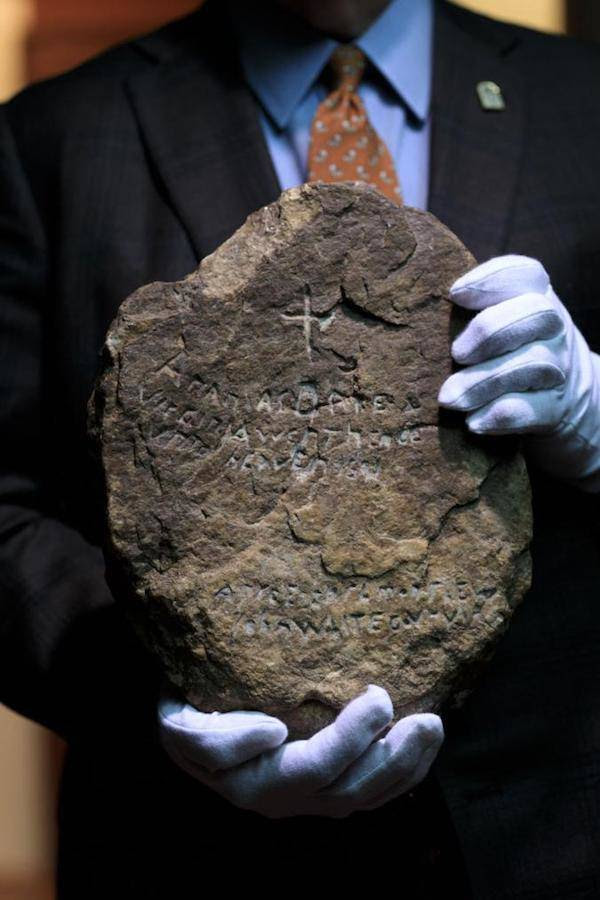 Brenau University/National GeographicEd Schrader holds one of the stones.
But then, in 2016, Ed Schrader decided to take the original stone found in 1937 to the University of North Carolina for analysis.

He sliced off one end of the stone to discover that, in contrast to the darker exterior, the interior was a bright white. Thus, any inscriptions made in this stone would be that same bright white.

However, the inscription on the stone was much darker in color. Such darkening takes a very long time to occur, suggesting that the inscription was made in the approximate era of the Roanoke Colony (it would have been very difficult in the 1930s to use chemicals to mask the color).

But now, Schrader wants to fund an “exhaustive, geochemical investigation” that should go beyond the analysis described above and perhaps prove once and for all whether the stone is legitimate.

And before that, this fall, researchers plan to more thoroughly analyze the language inscribed on the stone in order to verify its authenticity.

“I would surely like to know,” Schrader said, “whether Eleanor White Dare had her hands on this stone about 500 years ago and left us a message.”
Posted by arclein at 12:00 AM