Betting on a Catastrophically Cooling World 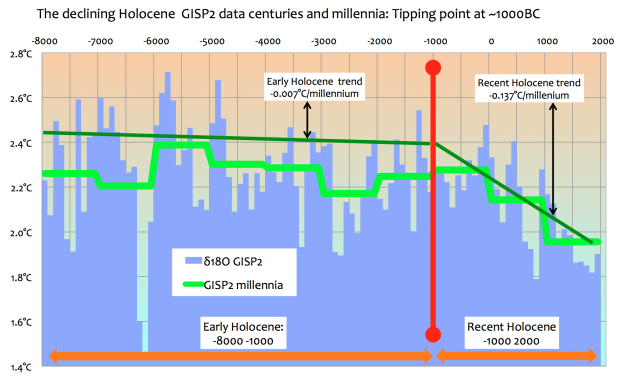 This does not address the core question of why did the heat content of the Earth decline during the past three thousand years.  My answer to that is simple and it leads directly back to our solution.  The Sahara and the whole Middle East has lost its tree canopy.  It is now mostly abandoned desert.  This actually reflects massively incoming radiation back out into space.  Nighttime temperatures plummet.

This process has been underway throughout the whole Holocene but really got serious over the past two thousand years..

The really good news is that the process has now started on a path of reversal as best practice has begun recovering those lands.  Merely predation control and tree grooming will do a lot.

In fact fencing of a barren square mile of the Sahel will allow buried root systems to rebound.  After a couple years of that you will have a robust cover.  Then applying the water box tech allows injecting commercial trees able to reach deep for water.  all this will lift the water table as well..

Long term we will return to Bronze Age conditions.
Betting on a Catastrophically Cooling World

Our current, warm, congenial Holocene interglacial, although cooler than the Eemian interglacial 120,000 years ago, has been the enabler of mankind’s civilisation for the last 10,000 years, spanning from mankind’s earliest farming to the most recent technologies.

Viewing the current Holocene interglacial on a millennial basis is rational. But sadly it seems that, driven by the need to continually support the Catastrophic Anthropogenic Global Warming hypothesis/religion Climate alarmists irrationally examine the temperature record at too fine a scale, weather event by weather event, month by month, or year by year.

From the broader perspective, each of the notable high points in the current 11,000 year Holocene temperature record, (Holocene Climate Optimum – Minoan – Roman – Medieval – Modern), have been progressively colder than the previous high point.

The ice core records from Greenland for its first 7-8000 years, the early Holocene, shows, virtually flat temperatures, an average drop of only ~0.007 °C per millennium, including its early high point known as the “climate optimum”. But the more recent Holocene, since a “tipping point” at around 1000BC, 3000 years ago, has seen temperature fall at about 20 times that earlier rate at about 0.14 °C per millennium.

The Holocene interglacial is already 10 – 11,000 years old and just judging from the length of previous interglacial periods, the Holocene epoch should be drawing to its close: in this century, the next century or this millennium.

Nonetheless, the slight and truly beneficial warming at the end of the 20th century to a Modern high point has been transmuted by Climate alarmists into the “Great Man-made Global Warming Alarm”.
Posted by arclein at 12:00 AM