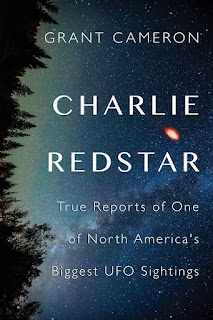 This is an important contribution to the UFO problem.   The events took place during the mid 70's in Manitoba and also North Dakota essentially centered on the only nuclear ABM base that operated for a short time contemporaneously.

The traffic was always at night  and tracked similar paths allowing locals to set up viewing posts to optimize observations.  As this carried on for two years until the Minot base was shut down, it allowed us to produce a large body of eyeball reports of not just Charlie Red Star but other craft as well.   Grant Cameron collected all those reports and published them in this book.

From the mass of reports we are able to establish that these craft conform to the anticipated development level achieved by the USA black programs.  These are test vehicles working out technical issues that were seconded to Minot to provide night time protection and to also observe any actual alien craft as well.

Recall that gravity manipulation was achieved in 1955, confirmed by us two years ago, and this produced small test vehicles during the sixties that found their way into UFO literature.  Eyeball report inspected these craft around that time.  Larger test beds were certainly the next step and here we have them along with multiple collected reports.

Note that we then transition into the eighties with the creation of craft possibly the size of a football field and triangular in shape which also produced an additional horizontal propulsive vector and also used jet engines as well and are still in service.

In 75, what we saw was high speed vertical acceleration but slow lateral velocity.  It is also reported that when traveling horizontally the craft tilted strongly which is what i would anticipate if you are trying to exploit the gravity skirt..

The actual bells and whistles, glass work and skin appearance all conform to our technology in time and place.  No real anomalies there.  Even the choice of a red light is a human choice.
..