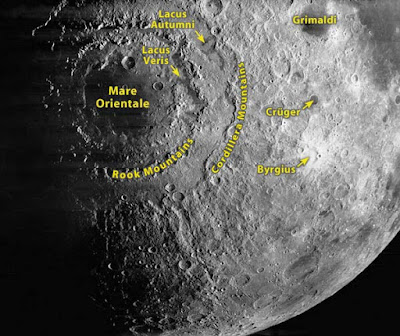 This gives us an additional tool to understanding the surface of the Moon.   Large devices discharge plasma which can sculpt the surface or at least may well have done so in the distant past.

Also understand that it is likely the moon was the forming device used to reshape the Earth's surface four billion years ago.  This was done by the expedient of going back in time to actually execute and leaving the moon there to continue operations as needed..  Thus it makes sense that the same thing is done to produce the rings themselves about Saturn.  Time is not the problem here.

Dione and Iapetus both have been subjected to the burning fury of visitation from an electromagnetic vehicle. Each has experienced topographical structuring caused by various emissions which these high-potential units possess. In the case of Iapetus, structuring can be deduced to be much more than a surface phenomenon. In being subjected to the observed electro-potential field, electrical currents enter Iapetus, converge within the interior, then exit. Surface distributed entry currents combine to reach a large magnitude near the center. Consequently, a situation is established wherein considerable heating of the core occurs, perhaps to the extent of producing a molten constituency.

Simultaneously, a situation also is created whereby extraneous material is shedded at the surface as current shafts enter the satellite. This latter situation is supported by photographic observations of dark material on the periphery of Iapetus where current paths have been found to enter.

Besides deposits, visitations are evidenced by a wide assortment of surface scars. Most familiar are craters of widely ranging diameters.

Other scars are in the form of rills, ridges and thermo-set areas having surfaces of indistinct features. Dione exhibits mostly distinct craters, rills and ridges whereas Iapetus displays a dimpled surface with indistinct features. Differences can be attributed to the particular vehicle component creating the scar and the amount of attendant heating. For a given electromagnetic vehicle, the maximum diameter for a round scar (e.g., a crater) would be a size approximating vehicle body diameter. Because these spacecraft have long-range cruise capability, any solar-system body becomes a suspect candidate for having experienced visitations.

A generalized scientific concept must fit circumstances other than the particulars from which it derives. Additional situations involving Saturn and environs act mainly to augment particulars.

Moreover, available topographical imagery is rather sketchy and too wanting in overall detail for demonstrating application using other Saturnian satellites. Earth's moon, on the other hand, enjoys the most complete and highly detailed mapping of all the celestial bodies. Furthermore, remote independency exists with respect to the Saturnian complex Consequently, earth's moon makes an ideal candidate with which to test the concept of vehicle-created surface scars.

Of all the lunar scars, those of Mare Orientale or Eastern Sea rank among the most spectacular and noteworthy. This lunar feature is not familiar to most earth inhabitants because of its unfavorable location for viewing. Specifically, Mare Orientale sits astride the western limit of moon visibility from earth, with only eastern ridges of its huge basin barely exposed to sight. Compound surface scars can be comprehended best by viewing them in global perspective. As an aid, Plate 43 presents Mare Orientale as portrayed on an official moon globe.* The central region consists of two concentric, near-circular ridges stretching bi-laterally across the western visibility limit, (1). The outer ridge, (2), has a diameter of about 965 km (600 mi); and the inner ridge, (3), has a diameter of about 550 km (340 mi). These ridges surround a center pit, (4), whose breadth is of the order of 240 km (150 mi).

2. Outer ridge
3. Inner ridge
4. Center pit
5. Glazed surface
6. Radial markings
Plate 43: Mare Orientale as portrayed on an official NASA moon globe.
Photographic mosaics of the area reveal that this pit is a deep hole, and not a smooth continuum of a broad basin. The floor of the hole is reported to contain patches of dark basaltic material. Additionally, the mosaics show a glazed surface, (5), around the eastern periphery.
Radially disposed markings of rills and ridges, (6), occur on the northern and southern sides. In the north and south, these radial markings are found within an included angle of about 100 degrees. In the east and west though, radial markings definitely are absent within the remaining angular area.
Instead, different markings prevail.
Incomplete radial symmetry negates meteor impact in that a hit should produce full-circle radial splash marks.


Surface scars and markings on celestial bodies long have been used as indicators of earlier events.

Typically, craters have been cited as evidence that meteors, or showers of meteors, have impacted in prehistoric times. Thus, scars and markings are, in themselves, informational data; and interpretation of their geometry and contents deviates significantly from a circular contour. Accordingly, the outer ridge circle can be described as having a "trough" in it due to this deviation. An "inverted trough" is formed above by small rills and ridges between the inner and outer ridges. The resulting enclosure, which approximates an oblate ellipse, (6), encompasses surface which is relatively smooth compared with surface outside the oblate enclosure.

let us examine Mare Orientale without preconceived notions regarding its formation, and permit the
configuration to speak for itself.
Plate 44 presents a configuration interpretation of lunar markings at Mare Orientale utilizing an official NASA moon globe. In the plate, region (1) delineates the central hole, and circles (2) and (3) the inner and outer ridges, respectively. Rook Mountains is the name which has been given to the inner ridge and Cordillera Mountains, to the outer ridge. Line (4) circumscribes the southernmost exhibit of radial markings. This exhibit is separated by a serpentine strip, (5) which terminates at the south pole about 1600 km (1000 mi) distant. Another interpretation in pattern occurs at the southern extremity of the Cordillera Mountains. There, a short section of mountain range Manufactured by the Geographical Globe Division of Meredith Corporation, Chicago, Illinois, this globe simulates lunar topography as depicted by photography from various NASA circumlunar missions.

Due north of the outer ridge, a bulbar band of terrain, (7), is outlined longitudinally by two undulating lines. Terrain between these two lines exhibits surface features which change rather abruptly across the boundaries. For example, there are radial markings terminating just inside the boundary line on the right; on the left, there is a smooth rippled surface changing to a pitted one; and in the middle, there are numerous closely-packed and overlapped craters. This localized admixture of non-homogeneous surfaces suggests that simultaneous events of common origin are needed to produce the topography shown.
A physical mechanism which could create the bulbar-shaped region portrayed in Plate 44 is an overlying impinging high-temperature pinched-plasma flow. Centrally within band boundaries, closelypacked and overlapped craters would be formed by electrical-current arcs which jump repeatedly from the pinched-plasma flow to ground (i.e., to the surface). That the central region should be most cratered is consistent with this area being the shortest electrical route between the impinging flow and the surface. Adjacent to the eastern and western sides of the outer ridge, the terrain displays a knurled character and includes some small rills and ridges. Propitious location of this latter terrain with relation to the Mare basin "facial" outline suggests the terminology "eastern ear", (8), and "western ear" (9). Unenclosed markings, (10), consisting of rills, ridges, rivulets and small craters in tandem, radiate outward and upward from these ears. All patterns heretofore described reasonably are interpretable as being family related with respect to the Mare central hole and basin.
Collectively viewed in perspective, composite diagnostic markings of the Mare Orientale moonscape pictorially describe an elementary frontal image of an electromagnetic vehicle. Reality of the extraordinarily broad Mare Orientale vehicle-caused imprint can be comprehended with visual assistance from a combination model of moon and vehicle.
Plate 45 shows a model electromagnetic vehicle and a NASA official moon globe co-scaled and positioned to illustrate formation of Mare Orientale as developed pictorially in Plate 44. The nose end of the vehicle model appears at the right positioned to have center-to-center alignment with the Mare Orientale hole and basin. Body diameter, to the scale of the lunar globe, is 965 km (600 mi). This small-scale model is a highly simplified replica of the vehicle identified near Iapetus in Plate 38. Component-item details have been sculptured to simulate those suggested by imagery of Plates 30 and 38. Direct correspondence between specific lunar-surface areas and particular vehicle components becomes apparent when the two bodies are co-aligned as shown.

Ancient lunar presence of an electromagnetic vehicle at Marie Orientale can resolve other perplexities concerning the moon. One of these perplexities is that a significant magnetic field, according to evidence, must have existed on the moon about 3 to 4 billion years ago.

Interestingly, the age of Mare Orientale independently has been pegged at about 3 to 4 billion years. Discovery that the unorthodox sectorial illumination of Iapetus is attributable directly to the presence of an encompassing electro-potential field leads to a tentative conclusion about the long-extinct lunar magnetic field. Specifically, the conclusion is reached that the moon has, at some time, experienced the same treatment as Iapetus. According to Plates 44 and 45, an identifiable time at which the moon has undergone magnetizing influences is from an electromagnetic vehicle while forming Mare Orientale. Co-supportive ages of Mare Orientale and ancient lunar magnetism inferentially age-dates the mechanism responsible. Specifically, the conclusion can be drawn that electromagnetic vehicles themselves have been around for a long time - at least 3 to 4 billion years.

That electromagnetic vehicles are connected anciently to lunar formations distinctly opens a strong possibility of a past intimacy with earth. Implications to this effect already have been signaled by  terrestrial rocks which date back to about the same birth date as Mare Orientale. A lunar connection with electromagnetic vehicles neither abrogates nor conflicts with data obtained from moon-orbiter missions and landing excursions.

This integral posture is much more substantial than concepts which explain prehistoric data only for narrow circumstances.
Posted by arclein at 12:00 AM