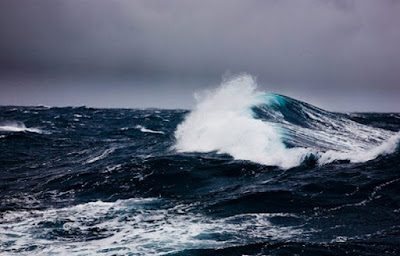 .
Except that the meta stats and associated meta data should throw something up to support this.  We have dozens of events.  Do sea conditions confirm that those conditions existed?

Do the implied homework guys before you make extraordinary claims.  Rogue waves do occur, but they are also rather rare.  Thus an accident might occur once in say a century which hardly justifys a theory.

This is a case of blaming a needle in a haystack.

Have scientists finally solved the mystery of the Bermuda triangle? The infamous body of water in the western part of the North Atlantic Ocean stretches 270,271 square miles between Florida, Bermuda, and Puerto-Rico.

The Bermuda Triangle has been the source of many strange occurrences and mysteries involving both aircraft and boats. It is also known as the Devil’s Triangle and the area features multiple shipping lanes and has claimed over 1,000 lives in the last 100 years. But scientists think they have finally figured out why this continues to happen.

According to Fox News, experts at the University of Southampton believe the mystery can be explained by a natural phenomenon known as “rogue waves.” Appearing on a Channel 5 documentary “The Bermuda Triangle Enigma,” the scientists used indoor simulators to re-create the monster water surges. These waves, some of which measure 100 feet high, only last for a few minutes. They were first observed by satellites in 1997 off the coast of South Africa and are often seen as the source of so many lost ships.

The research team built a model of the USS Cyclops, a huge vessel which went missing in the triangle in 1918 claiming 300 lives and used it in their indoors simulator. Because of its sheer size and flat base, it did not take long before the model is overcome with water during the simulation, according to Fox News.

Dr. Simon Boxall, an ocean and earth scientist, claims that the Bermuda Triangle area in the Atlantic can see three massive storms coming together from different directions, making the perfect conditions for a rogue wave. Such a massive surge in water could snap a boat, such as the USS Cyclops, into two pieces, said Boxall. “There are storms to the south and north, which come together. And if there are additional ones from Florida, it can be a potentially deadly formation of rogue waves,” Boxall added.

Reprinted with permission from SHTFplan.com.
Posted by arclein at 12:00 AM