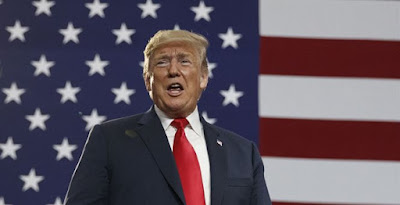 The take home is that a clear class of voters are rethinking their allegiances.  That is also happening among all other groups including Hispanics.

It is worse than that of course. This is only the fifteen percent prepared to think about politics long outside of the election cycle.  These are the foot soldiers that bring their families aboard when the writ is dropped.  They are supposed to be steady as a rock now.

Trump has clearly unlocked allegiances across the whole electoral spectrum and they are all used to him now.  After all he is their crazy uncle who gets things done and if it screws up, is the first to fix it.  They can certainly live with that after years of been ignored.  Better yet they all share enemies with him.

It is way too early to make prognosis on electoral outcomes, except that it will now demand an extraordinary DEM leader to even make a show in 2020 and that will be true even if Trump does not run.  Anyone else gets to run on a spectacular track record GW did in 1988.


If this figure reported in Rasmussen's daily presidential tracking poll Friday is anywhere close to accurate, Democrats are closing in on a crisis. While to poll results available to the general public reported on the Rasmussen Reports website do not contain the racial breakdown (Rasmussen pays its bills by selling detailed breakdowns of its polling results to political pros), so notable was the figure that Rasmussen tweeted out a notice:


Given the booming economy, many African-Americans are experiencing opportunities for employment the likes of which were completely unavailable during the eight years of America's First Black President. Opportunity is calling, and many people of any race who previously despaired of bettering themselves through work are finding out that a rising tide does indeed lift all boats.

With approval nearing one third of American blacks, it is no longer viable for Democrats to insist that Trump is such a vile racist that any favorable views of him should be censured by all right-thinking African-Americans.

The Democrats heavily depend on 90-plus-percent turnout and 90-plus-percent support for Democrats among African-Americans. If that level of support falls to 71%, the game is more or less over. Of course, support voiced to an automated poll in a phone call is different from pulling lever to vote, but it is the start of a process that has another two years to playout before Trump's name faces voters again.
You can bet that Bill Maher is far from the only leftist hoping that America experiences an economic crash.
Posted by arclein at 12:00 AM