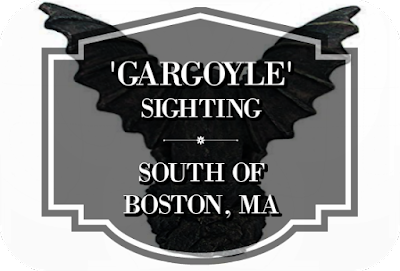 This time we got a good look without the face.  That the witness confirmed first impression of a gargoyle is important as he surely got it right.  This means not a bird and not a pterodactyl.  We have now had plenty of likely gargoyles and even some other actual IDs as well.

The Chupacabra is surely a gargoyle and there is plenty of game out there for a blood feed as well.  These creatures generally stay well clear of us and our animals though not always with a chicken coop and other small operations.  Larger operations really have way too much protection.

Again we have the Thunder Bird out there as well as the Chupacabra or Gargoyle and we also have a Pterodactyl also.  All these can sit down on a roof and will.
..

The following account was posted at Reddit today, by the user named Decay_WithMe. I contacted the witness and received a bit more information:


I live 25 minutes south of Boston. About 6 months ago I saw this insane thing. It was about 3 AM, I had been up late as I normally am. I stepped outside to smoke a cigarette. It was dark as Hell except for the stars and moon. As I was smoking I heard this noise of something flying. I look up and see this winged creature land on my neighbor's roof and just sit there like a Gargoyle would. I thought I was seeing sh*t or seeing something wrong but then the creature jumped up and flew away and I could see its whole body. It was the size of a small human but massive wings. It reminded me of a Gargoyle. I don't know what the f**k I saw but it was crazy. Has anyone ever had an experience seeing something like this? Humanoid creature with wings?

After contacting the witness, I received the following message:


Hey there. I can do my best. I couldn't see the creature's face because it was dark and it was on the roof facing away from me. It looked black with a wing span upon flight maybe 4-5ft. The creature itself while crouched on the roof looked the size of a smaller human maybe 4ft. I watched it trying to figure out what I was looking at, for maybe 1 minute, then it jumped and flew off. Even when it flew away it still looked on the shorter end. As it flew, its legs hung but still in an almost crouching position. It wasn't a massive creature but it was definitely humanoid in appearance. Location was 25 minutes south of Boston around January - February of this year. Because it was on a roof next door crouched its possible this thing could have been much larger. I wish I could have seen its face.
Posted by arclein at 12:00 AM