Child of the State, Man of War 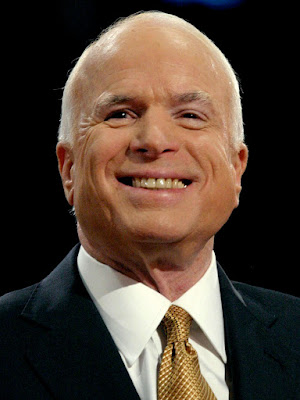 John McCain has passed and not of his own choosing either.  Instead he was given Rommel's option.  That is why the terse announcement of discontinuing treatment was followed immediately by his death.  This is by way of Qanon et all

His questionable behavior even after the rise of Trump, when more sensible men might have gone for cover has ended badly.

This man received a blanket pardon on been repatriated from Vietnam, mostly because no one wanted to hear anything more about Vietnam.  Did anyone else need it?  And his immediate removal after the Forestall explosion prevented him from facing his peers in the pilot's mess. Even an obvious accident gets you a court martial in order to determine responsibility in the Navy.  Somehow none of that happened.

This is a career we have all watched and he was utterly unsuited and untrained as well for command yet he strived for it.  It is possibly a blessing for him and for us that he never did get it.  RIP .

Child of the State, Man of War

And now, John Sidney McCain, III is a corpse in a morgue awaiting his state burial. It is as it should be, perhaps for the first time in his entire life.

McCain – the holy terror of teenager and Naval Academy cadet, mad pilot and poster child for the horrors of the towering enemy we faced for our very survival as a Republic in Vietnam, and political animal for much of his life – clearly was not at home in this world.

In a world filled with people who are all pretty much accountable on a daily basis for their decisions, choices, actions, and for the pain they have and are causing, John McCain was missing from his post.

Instead, as a son of a successful Naval commander, he path was not entirely his own, and yet he did, repeatedly, choose that path. His biggest tragedy may have been that he was the namesake of a distinguished military family. Certainly the life of his younger brother Joe Pinckney McCain is a testament to how being born into service of the state doesn’t have to result in the deaths of so many for so long. Against the State: An ... Llewellyn H. Rockwell Jr. Best Price: $14.00 Buy New $9.95

Where failures and character flaws occur in all families, when they occur in the important chapter of the national narrative called “Military Heroism And Sacrifice In The Name Of National Greatness And Security,” something must be done.

And what was done? Props, propaganda and prose all came forth, and we aren’t done being propagandized and prosed to death just yet. The funeral is coming.

While much has been written about John McCain, it’s the stories we haven’t been told that bother most people. How he made it through the Academy on our dime with massive numbers of demerits and low academic performance, how he avoided courts martials and discharge from the Navy after the first two plane crashes and flying through the telephone lines in Spain, all before the interesting roles he played on the deck of the USS Forrestal before, during and after it burned.

The story of being shot down, likely by friendly fire, and his subsequent capture and torture by the “North” Vietnamese (a state construct in its own right) is rarely told in detail, but rather bundled in the official narrative under “courage.” His divorce of his first wife and disconnect from his first family – understandable because of what war, separation and the stress of a military society do to human beings – is not discussed. Nor are the personal, political and financial machinations that led to his first Congressional seat, and shortly thereafter, a secure Senate seat for Arizona, a seat he has held since this weekend.

From being a savior of the A-10 Warthog program, refusing to allow it a natural death — ironically the aircraft known for causing the most friendly fire and civilian deaths — to saving Obamacare from the breach, to reliably supporting projects to change governments overseas, all while waging low-level but steady combat against liberty and the Constitution at home, McCain was a busy man, and a well-connected, well-funded politician.

The actions of McCain as Senator are legion, and while no doubt people of various political stripes may find at least one or two things to laud in his progressive neoconservative warmongering and state-strengthening agenda in over three decades, in reality he earned no loyalty. This glowing yet strangely surreal obit by Jeff Goldberg of the leftward progressive and warmongering Atlantic says it all – and has it all wrong.

A better way to understand John McCain is to see him for what he really was and what he never escaped, although in his wistful moments one wonders if he dreamed of it. He was a child of the state, the military state specifically. He was the namesake of men who fought for the state, sacrificed their principles and families for the state, he was schooled by the state, both in the many military base schools he attended as a child, then the Naval Academy, later the US Navy, even later a prison camp – and in all of these places John McCain was treated and handled just a little bit different than the average Joe. In every way, he owed his very life and his very liberty to the fact that he was deeply connected to the elites who are the shining beneficiaries of the American empire.

Later, as long-serving Senator and presidential candidate he became one of those elites in his own right, and earned every drip of contempt by the thinking people — and every plaudit by state mouthpieces — on his own merit.

I’ll never forget a story I heard, where, in the privacy of an elevator (with some people who didn’t count as witnesses) McCain repeatedly jabbed a fellow Senator in the chest while making his point and/or intimidating his inferior. Even after he learned to box at the Academy, as Robert Timburg writes, he “would charge into the center of the ring and throw punches until someone went down.” For a national narrative that likes physical courage and loves the quick fighter, McCain was tailor-made.

Timburg, in writing about McCain’s Naval Academy days, was extraordinarily prescient. McCain was “…an unofficial trail boss for a lusty band of carousers and partygoers known as the Bad Bunch.” That lusty band of carousers and partygoers we have seen before in our lives. When that group persists for decades and rules an empire, it is because they are consistently protected from the consequences of their own decisions and actions.


Joe McCain, John’s younger brother, took a different path, where he would not become rich or powerful, where he would be accountable for his decisions and actions. He is not lauded in the media, and in fact was ridiculed when brother John was running for President in 2008 for calling 911 to find out what was happening in a traffic jam on the Wilson Bridge.


Both were children of the state. Joe called 911 innocently, because why not, it’s there to serve me! John rained hell on governments and populations around the planet, including his own, for similar reasons. It’s a kind of entitlement mentality, and it is as understandable as it is deeply immoral.


In John McCain’s lifetime, the US Government has nearly quadrupled in size and scope, while popular trust in government has collapsed. Solutions to local and global problems today however are far more accessible to far more people. Today, no one would call 911 for a traffic report when they have real time traffic mapping in their cars, and a full range of productive things to do while waiting. Technology and human nature both favor decentralization and individualism whenever they can get it, preferring liberty over lockstep marching in spitshined boots and buckles that young John resented so much at the USNA.

Perhaps he had an inkling about the future after all.
Posted by arclein at 12:00 AM