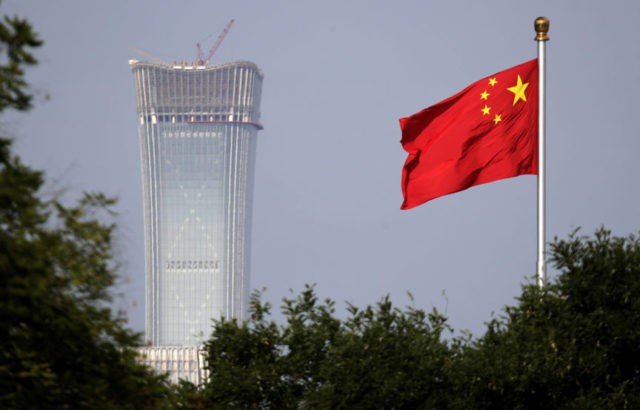 China’s state-run newspaper Global Times derided critics in the West Thursday for condemning a new initiative forcing all religious buildings to fly China’s red flag as a means to “enhance the concept of nation.”

The newspaper claimed the move was necessary because, without imposing the government’s wishes on individual religions, the nation could “lurch toward war.”

Requiring religious institutions to fly the national flag, a symbol of the nation’s embrace of communism in 1949, is necessary because “religions are exclusive” and the government has a responsibility to work on “strengthening people’s national and civic consciousness,” the Global Times argued.

According to the state newspaper, the proposal to make all buildings fly the flag came from “the country’s major religious associations.” China recognizes only five religions legally—Protestant Christianity, Catholic Christianity, Islam, Taoism, and Buddhism—and has established government-recognized “patriotic” institutions that govern each. Chinese citizens who wish to worship outside of government institutions are considered criminals. Beijing has increased its persecution of unofficial “house” churches and home worship under Communist Party leader Xi Jinping.

“The country’s major religious associations on Tuesday proposed an initiative demanding that all religious venues raise China’s national flag to strengthen awareness of respect for the flag and preserve the flag’s dignity,” the Times noted, adding that “some Western media outlets” condemned the move as stifling religious expression.

“A national flag is a symbol of the country that should be respected by all citizens,” the Global Times insisted. “The display of national flags is not only recognition of national sovereignty, but also a manifestation of love for the country.”

The Global Times announced the initiative on Tuesday, citing Chinese “experts” who applauded the move “for seeking to assimilate religion into a socialist society and as progress for religious development.” At the time, the newspaper once again expressed the belief that Beijing has a responsibility to teach religious people to “better practice socialist core values.”

The move follows orders from the government leaders of the five religions to local churches, temples, and mosques, to “Sinicize” the religion fully—to make each religion more “Chinese.” To do so, according to a white paper the government released titled “China’s Policies and Practices on Protecting Freedom of Religious Belief,” religious leaders “must conduct religious activities in the Chinese context, practice core socialist values, carry forward the fine traditions of the Chinese nation, and actively explore religious thought which conforms to the reality in China.

The Chinese Communist Party has expressed particular concern regarding the activities of Christians around the country who do not attend government-organized services, Uighur Muslims in western Xinjiang province, and Tibetan Buddhists following the Dalai Lama in Tibet. Part of the campaign to “Sinicize” religion involved banning children from religious services. Most recently, the government decreed that children in Tibet are not allowed to participate in any religious activities during the summer. Parents of children in the province were forced to sign documents promising not to expose their children to religion. A similar decree was passed in Xinjiang months earlier.

According to the U.S. State Department’s annual International Religious Freedom Report, Xinjiang is experiencing some of the most brutal religious repression in the world. The Chinese government is forcing hundreds of thousands of Muslims into “political re-education camps,” where they are often tortured and forced to violate their beliefs, sometimes by being forced to eat pork. The Chinese government does not deny that it is “re-educating” Muslims in the region—the Global Times boasted of the program promoting “the correct political stance and excellent moral traits” this month. It has nonetheless dismissed criticism from the rest of the world, particularly the United States.

“We call on the United States to respect the facts, mind its own business, and stop using the religion issue to intervene in other countries’ internal affairs,” Chinese Foreign Ministry spokeswoman Hua Chunying told reporters following the publication of the 2017 State Department International Religious Freedom Report.