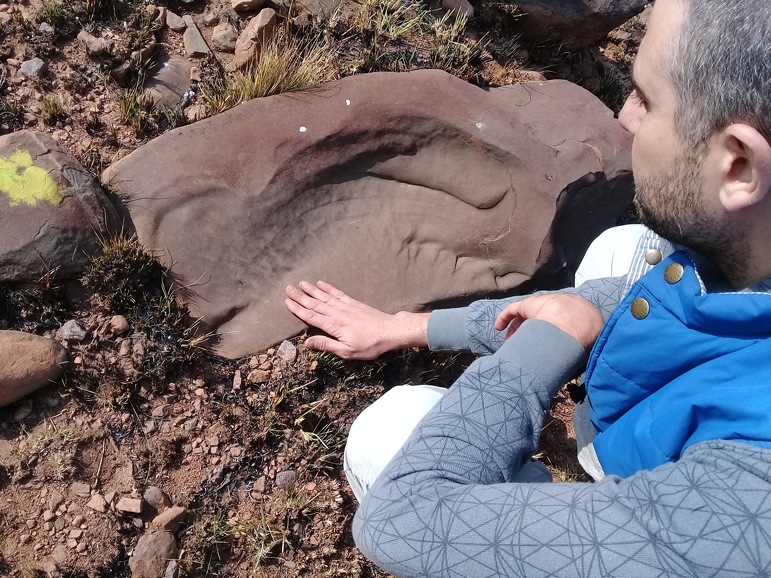 It was not of course but another identification error made from immature bone development.  This happens often and mostly because of a lack of caution.  After all a chicken's spine looks like a human spine during the early part of the grow cycle.

The context strongly suggested early reptile and hat is what did develop here.

It is also true that we are far too dependent of our geological ageing paradigm which is naturally circular and has been built up over the decades to become unassailable but not necessarily correct.

What is more, many creatures may well not be represented in the fossil record. We have snap shots rather than a record.  Imagine having only a nineteenth century snapshot of New York City. as your guide to understanding.  You cannot possibly be right.

in News /by michael

During day 3 of the Stone Circle Research Expedition with me Michael Tellinger, in the mountains of Mpumalanga, South Africa, one of our team members discovered what could shake up all of archaeology, geology and history at the same time. A Fossil showing vertebra, spine and hip bones of a humanoid baby or small child, embedded in a large rock. Nassem Ferran is a Radiographer in a hospital in Israel. He immediately identified this as if he was looking at the many scans and x-rays of spines in his daily line of work. Naseem said that this fossil or imprint is identical to the x-rays of children’s spines which he sees almost every day.


Our expeditions keeps delivering new surprises every time we hit the mountains. One of the great puzzles in discovering an ever increasing number of MUD fossils, remains the fact that the body parts trapped in mud, and now finally exposed, have undergone complete metamorphoses into what is commonly referred to as “hornfels” rock.

This is going to require a whole new look at geology and the transformation and transmutation of organic matter to so-called inorganic matter – or petrification.

.
There is very little if any literature on this subject, other than Roger Spurr’s Mud Fossil University Channel on YouTube. I look forward to what the rest of our expedition will deliver.

Keep exploring – Michael Tellinger
Posted by arclein at 12:00 AM