China Launches Personal Attack At "Arrogant, Deceitful" Trump: "We Are Prepared To Fight To The End" 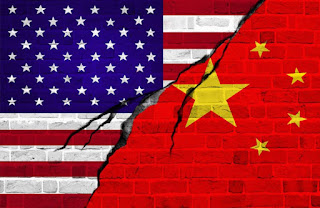 This blast of propaganda is aimed at the leadership itself to shore up the support for the government.  It also serves to rally internal support though that can be fleeting.

In the meantime the stock market has massively collapsed and trade problems are multiplying.  I expect negotiations are going on at a high rate right now and will continue in an emergency mode.

Recall that Trump can retreat anytime and not worry about saving face.  Better he can talk about bad acts by Chinese spies.  The loss of face will thus be serious to the Chinese.

China Launches Personal Attack At "Arrogant, Deceitful" Trump: "We Are Prepared To Fight To The End"
All hope abandon ye who think the trade war with China has any hope of ending soon.

One month ago, Beijing ordered China's state media "not to use aggressive language" for Trump. As of Sunday, that directive has clearly expired, and after a weekend of bluster by President Trump in which he proclaimed that he has the upper hand in the trade war with China, Beijing finally responded angrily through state media, saying the nation is ready to endure the economic fallout, and launched an "unusually personal attack" against Trump’s trade policies on Monday, saying Trump’s trade “extortion” would not work according to Reuters.

An editorial in the nationalist Global Times on Sunday evening declared that China is prepared for a "protracted war" and doesn’t fear sacrificing short-term economic interests, "considering the unreasonable U.S. demands, a trade war is an act that aims to crush China’s economic sovereignty, trying to force China to be a U.S. economic vassal."

Separately, in a front-page editorial on Monday, the overseas edition of People’s Daily said Trump was "starring in his own carefully orchestrated street fighter-style deceitful drama" in which diplomacy had been reduced to nothing but a “trading game in which everything should follow the rule of America first”.

"To realise the goal of reviving the American economy, Trump has chosen a simple but crude way. He has bypassed the multilateral trading system of the WTO and started trade conflicts, forcing countries, including its traditional allies, to cede their interests to those of the United States,” the People's Daily said.

It also claimed that the US was “turning international trade into a zero-sum game” in the hope of forcing China to make a tremendous compromise. “But China will never surrender to blackmail and will definitely rise to defend itself when it involves national interests and national dignity,” it said.

[  Oh boy - Trump is about to drag out every bad act pulled by Chinese spying and will punish them for it.  This can not get more humiliating.  After all that is settled, publically or not, they will be happy to have a fair trade arrangement. arclein ]

The onslaught continued with an editorial by the China Daily, the flagship state-run English newspaper, which said that "in the face of the bullying of the Donald Trump administration, Beijing must remain sober-minded and never let emotion override reason when deciding how to respond.

Given China’s huge market, its systemic advantage of being able to concentrate resources on big projects, its people’s tenacity in enduring hardships and its steadiness in implementing reform and opening-up policies, the country can survive a trade war."

The latest volley in the trade row between the countries comes as Chinese leaders gather in the coastal resort of Beidaihe near Beijing for their informal, annual summit to discuss the domestic, economic and foreign policies of the coming year according to the SCMP.  The trade war is expected to be high on the gathering’s agenda.

The heated war of words following Beijing's announcement on Friday that it would add duties ranging from 5 to 25% on an additional US$60 billion in US goods if the Trump administration went ahead with similar action, warning that further countermeasures were ready at any time.

Earlier in the weekend, Trump told an audience of supporters that playing hardball on trade is "my thing" and said that  “we have really rebuilt China, and it’s time that we rebuild our own country now."

Then in Sunday Twitter posts Trump said the US’ punitive tariffs were “working big time” and that the US is winning the trade war, highlighting the drop in the Shanghai Composite offset by the resilience in the S&P500.

“Every country on Earth wants to take wealth out of the US, always to our detriment. I say, as they come, tax them. If they don’t want to be taxed, let them make or build the product in the US. In either event, it means jobs and great wealth."

“Because of tariffs we will be able to start paying down large amounts of the US$21 trillion in debt that has been accumulated, much by the Obama administration, while at the same time reducing taxes for our people,” he said, referring to his predecessor Barack Obama.

* * *
Following China's aggressive response, the yuan resumed its slide, following a rally triggered by a surprise China central bank move to make it more expensive to bet against the currency. As we reported before, China stepped in Friday to try to cushion the yuan after a record string of weekly losses saw the currency closing in on the key milestone of 7 per dollar.

Also on Monday morning, China reported that its current account returned to a surplus in the second quarter after a surprise deficit in the first three months of the year, although it was still the first H1 current account deficit on record.

“Policy makers will pay more attention on the changes in current account as it approaches a balance near zero, signaling less room for currency appreciation,” according to Ding Shuang, chief economist for Greater China and North Asia at Standard Chartered Bank Ltd. in Hong Kong.

Despite China's heated rhetoric, as JPM explained over the weekend, China's options are shrinking and are all uniformly negative as follows:
In other words, the longer trade war goes on, the worse it will be for China, even as the US remains largely isolated from immediate adverse consequences, if only judged by the stock market.

China disagrees however, as the People's Daily editorial makes clear:


China has to defend its right to development, and we don't fear sacrificing short-term interests. However, the US will bear losses as well. It's a mutual depletion where people in both countries have to pay the same price.


Throughout history, the US arrogantly initiated many wars that eventually ended up hurting itself. Washington's arrogance this time is up against a major power. When others believed that the US was just playing tricks with trade, the White House thought it could strike down China. But the US' ability doesn't match its ambition.


China has time to fight to the end. Time will prove that the US eventually makes a fool of itself.

And now the ball is in Trump's twitter corner.
Posted by arclein at 12:00 AM