Great Pyramid of Giza can focus pockets of energy in its chamber, scientists say 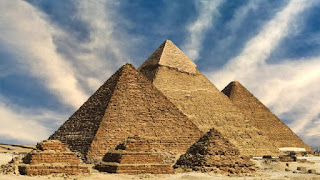 It is pretty clear that a solid pyramid will act to reflect Earth based resonance of all kinds into its core.  The resonance itself is a massive Earth wave that is parallel to the surface of the Earth and readily carried through rock.  It is focused by the pyramid into the center axis and more specifically into the center chamber because of the specific angle of the pyramid.

Other pyramids do not exhibit this angle but all pyramids will have a maxima along the center axis itself and may well reach deep beneath the pyramid.  We have certainly seen evidence of such an interest in getting under the center axis and that may well have been built first as well.

It is also observed that a number of other Pyramids exist worldwide and several are sufficiently intact to allow a clean focusing along the center axis.  This has caused loss of EM based tech on those craft flying over them. In fact i would use just that to confirm a manufactured pyramid.

By the by, the existence of this phenomena does not mean ancient understanding or the actual tapping of this apparent to us power.  They may well have actually used it in order to enhance mental experience.  That could well have been good enough.

The Great Pyramid of Giza can collect and concentrate electromagnetic energy in its chambers and at its base, scientists have discovered.

The 139m (456ft) construction was built by the ancient Egyptians more than 4,500 years ago and is the oldest of the Seven Wonders of the Ancient World.

Experts are still working to solve the mysteries of the pyramid, which is believed to have been built as a tomb for the pharaoh Khufu, also known as Cheops.

Its ability to concentrate electric and magnetic energy was discovered by a team of researchers led by scientists from ITMO University in the Russian city of St Petersburg.

They created a model of the pyramid to measure its electromagnetic response.

The model was used to see how wave energy is scattered or absorbed by the pyramid and the group tested the interactions with waves of resonant length - ranging from 200m to 600m.

If the pyramid's ability to concentrate energy can be recreated on a nanoscale size, researchers say the same science could be used to create more efficient sensors and solar cells.

The study, published in the Journal of Applied Physics, says: "In general, one may conclude that pyramidal objects located on a substrate and supporting multipole resonances can significantly suppress the reflection of incident electromagnetic waves.

"In the earth conditions, this could be used for controlling the radio-wave propagation and reflection.

"Due to the scaling properties, such a behaviour can be realised in different spectral ranges for suitable material and geometrical parameters."

"We as scientists were interested in them as well, so we decided to look at the Great Pyramid as a particle dissipating radio waves resonantly.

"Due to the lack of information about the physical properties of the pyramid, we had to use some assumptions.

"For example, we assumed that there are no unknown cavities inside and that the building material with the properties of an ordinary limestone is evenly distributed in and out of the pyramid.

"With these assumptions made, we obtained interesting results that can find important practical applications."
Posted by arclein at 12:00 AM