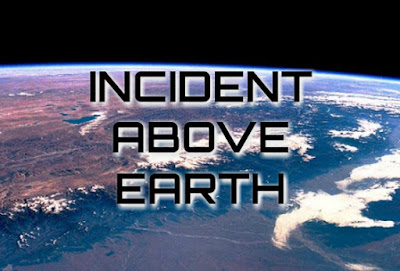 What is bizarre here is that an extraction was done and the individual was taken from an hotel room with witnesses and placed back in his own home.  As with thousands of abduction reports, medical procedures were undertaken
We also establish that the craft was in Earth orbit.  I do not think he was expected to become conscious through all this either.  Plenty of abductees exhibit the physical markings but few memories at all.  That is the real variable.
The folk involved are apparently reptilian as we know them from other reports and could well be Earth derived as well.  However no other sighting of likely Earth evolved Reptilians show gills.  Yet an old Sumerian report tells of just this.  So it is not even new.
There is substantial data gathering underway and several alien species appear involved.  The stories told are otherwise not particularly creditable.
.
Incident Above Earth
Wednesday, July 25, 2018

I don't know where to begin and, honestly, I'm hesitant to even bring it up. But I believe there should be a record of my experience. I don't want any notoriety. Nothing like that. I don't want to ever speak about it again, because it scares me so much. This is the truth as best as I can recollect.


My experience occurred in the first week of June 2018 near Naples, FL. I went to sleep around 11 PM in a room with a friend, who was sleeping in a bed next to mine. We were sharing a hotel room. I go to sleep. Nothing unusual.


Then suddenly I woke in what seemed like a hospital room. The first thing I noticed was I was laying on what appeared to be a hospital bed. I immediately assumed I'm in a hospital. As I realize there is no way I could be in a hospital I began to look around. I notice the walls of the room have a dark metallic color. This freaked me out because I know hospital rooms have bright colors and do not have metal walls. I was trying to understand where I was and the more things I noticed, the more disoriented and scared I became.


I then glanced to my right and I saw 2 people dressed in white attire. Then near my feet 2 more. Then to my left a person sitting in a chair beside my bed. My attention was concentrated on the person in the chair. I soon realized I was unable to move, almost like sleep paralysis. I would describe it as like being in a coma, but with complete mental awareness. I could see and hear everything around me.


The person in the chair was a human female. At least that is what she looked like. I was frightened. I remember her telling me to stay calm and it would all be over soon. She then pushes a needle into my left arm; like an IV needle but different. The needle required no tape to hold it in place, which was weird. The needle was an odd metal that gave off a strange luster. Her telling me to stay calm, to me, meant I was screwed. I was beginning to panic.


One of the 'people' standing at the bottom of the bed was holding a LED-like light on a long wire. I was told that it was used to 'decipher' who I was. The light was placed on the sole of my left foot. I didn't feel any pain, but suddenly blacked out.


I woke in the same room, not knowing how much time had passed. I was alone. Soon, someone came into the room (I never saw a door) and I began to move. I assume I walked out of the room and was now in a hallway. On one side was a dark metal flat wall. I noticed a door. I opened it and was in a room very similar to the one I was in before. I close the door and start walking down another hallway in the opposite direction. I pass many more rooms identical to what I just came out of.


I eventually reached an area with a giant window. Maybe 20 feet tall and 50 feet wide. I approached the window and saw the clouds and surface of Earth; thinking we're in orbiting the planet. I then knew I had been abducted and was in a craft of some type. I again started to panic. I looked around me and observed humanoids walking by me. But these were not human. They had olive-colored skin that appeared wet, but actually dry like that of a reptile. The faces had human features, but more ethnic. I then noticed what appeared to be 'gills' on each side of their faces. It was a startling sight; like their cheeks had been sliced open. They are quite tall, about 7 ft. or so and muscular. They wore no clothes or uniforms, but I couldn't tell if they were of any gender.


I approached one of the beings and asked 'is this real?' It grabbed my arm and glared at me with its golden-colored eyes. The next thing I remember was waking up on the bedroom floor in my apartment in Miami; not the hotel room near Naples! I believe I went into shock. I was suddenly sick to my stomach and shivering. I looked where the needle had been inserted into my arm and there was a small scab. I looked at the clock; it was 11:10 AM, but I was unsure what day it was. I felt exhausted and wanted to do nothing but sleep. It turned out that I had about 36 hours of lost time. I also had a painful bruise on the sole of my left foot, where the light object touched me.


I later contacted the friend I shared the hotel room with. They said that when they woke, I was gone; but my bed had been made. All of my personal property, my wallet and phone, were gone as well. They said that they called me but it immediately went to voice mail. There were no messages on my phone.


I have no idea what happened, but my life has changed. I have suffered extreme anxiety for no apparent reason, other than I feel that they may abduct me in the future. JJ


NOTE: I contacted 'JJ' by phone. He seems very forthright, but was hesitant to discuss more personal details. He has been under a physician's care for anxiety since the incident. Lon
Posted by arclein at 12:00 AM