What kills you when a volcano erupts? It’s not what you think 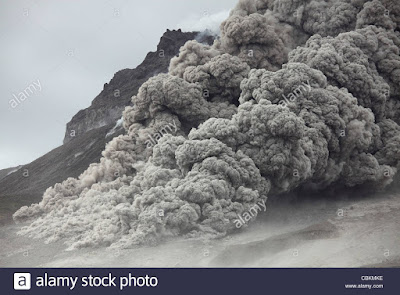 The history is all there.  When a volcano goes active it is mandatory to remove yourself to a great distance and out of and water sheds as well.  This is not complicated.  When Mt St Helens woke up  it immediately became unpredictable.  Worse the whole mountain was been lifted by several feet per day.

Unbelievably a handful of oblivious fools were continuing to work about the location.  Obviously the profession has sobered up since and we have not seen such folly since.  In the end a couple of dozen did die including a handful in the path of the twenty mile long directed out wash of hot gas and dust.

Pyroclastic flows are huge and travel rapidly which means a safe distance is about twenty miles away.

What kills you when a volcano erupts? It’s not what you think

The blockbuster movie Jurassic World: Fallen Kingdom (2018) involves more than just dinosaurs wreaking havoc. Humans are sent in to rescue some prehistoric critters on the volcanic island of Isla Nublar, and chaos soon begins. The volcano erupts, and everyone runs away as a roiling cloud called a pyroclastic flow approaches. At one point the main character disappears into the cloud. Luckily, some dinosaurs and humans in a strange glass ball fall over a cliff into the sea, and our hero splashes in not long after.

But would anyone have really survived? What is it like to live and die in the shadow of a volcanic eruption? Illustrations that depict jelly-like lava slowly moving down a mountain don’t tell the whole story. Even those beautiful photographs of the eruptions in Hawaii in June 2018, featuring fountains of iridescent, yellow-orange goop, give a rather romantic impression.

Some volcanoes do erupt in a relatively ‘calm’ way. Known as shield volcanoes, they form when an enormous bubble of molten rock (magma) rises from deep within the planet and oozes out like blood from a wound. This river of lava (magma that’s reached the surface) can still be devastating, wiping out homes with ease, but at least you can outrun it.

However, the destruction of the Roman city of Pompeii in 79 CE provides a glimpse of a much more menacing kind of volcano. The eruption of Mount Vesuvius produced ‘a black and dreadful cloud, broken with rapid, zigzag flashes [that] revealed behind it variously shaped masses of flame: these last were like sheet-lightning, but much larger,’ said Pliny the Younger years later in a letter to his friend Tacitus. This suffocating cloud, rather than great tributaries of lava, is what killed most of the villagers of Pompeii.

Mount Vesuvius is what’s called a composite volcano. Here the magma is made from lots of different types of rocks, liquids and gases, forced deep underground by plate tectonics. Under pressure and heat, this volatile mixture melts, and then rises back up to lurk inside a large magma chamber just below ground. Unlike shield volcanoes, these chambers contain a lot of gas – a bit like a bottle of Prosecco – which can’t escape because of the volcano’s solid-rock lid. As more magma and gas bubble up from below, the pressure builds and builds, as if the bottle is being shaken. Finally it bursts, releasing a thick cloud of vapour, ash and rocky debris that hovers above the volcano before collapsing into a pyroclastic flow. This is what makes composite volcanoes so dangerous.

Imagine living in Pompeii, before volcanologists could monitor the telltale signs of an imminent explosion, such as tremors, fumes, heat and ground elevation. First, a violent eruption blasts away a lot of the volcano itself, sending huge rocks and boulders flying through the air to land a good few hundred metres away. Lava (magma that’s reached the surface) runs down the slopes. Earthquakes make the ground shudder for up to five minutes, bringing you to your knees, but at least you still have time to get away.

As this is happening, ash is being thrust into the air, turning day into night. A thick cloud of it hovers above the volcano for several minutes, sometimes longer. Finally it collapses and careens down the slopes, carrying deadly boulders and fumes, and building speed as it goes. The killer cascade can achieve speeds between 80 and 700 km per hour, so fast it can travel uphill. You cannot outrun it. If you were one kilometre away, the flow would reach you in just five seconds. The ash in the air will scald your lungs and make it almost impossible to breathe. Temperatures in the flow can reach up to 1,000oC, so your flesh would start burning before the cloud even touches you, because it heats the air in front of it. If the cloud smothers you, you’re done for.

These terrifying avalanches have killed thousands of people in recorded history. Aside from Pompeii, almost the entire 30,000-strong population of the town of St Pierre in the Caribbean was killed when Mount Pelée erupted in 1902. Mount St Helens, in Washington State, killed dozens when it erupted in 1980.

However, it’s possible to survive a pyroclastic flow – rare, but possible. One of the survivors of Mount Pelée was ensconced in a prison cell without windows, safe from the outside world. Another hid in a cave on the edge of the island and was washed out to sea, only to be rescued days later. Some creatures survived because they were in their burrows underground, protected from the deadly temperatures above. Dave Crockett, a reporter who stayed out of its main path during the Mount St Helens eruption, described making his way off the slopes as ‘hell on Earth’, with roads washed away by mudslides, the air covered in hot ash, and the day turned to pure blackness.

Pliny the Younger was lucky. He lived in a small town on the opposite side of Mount Vesuvius. Had the pyroclastic flow swept down that side of the volcano, it’s unlikely that we would have any letters from him at all, or any understanding of what it was like to watch one of the great cities of antiquity be consumed by a cloud of death.

Our hero and the dinosaurs in Jurassic World were lucky. If the pyroclastic flow had been real, none of them would have left the island alive.