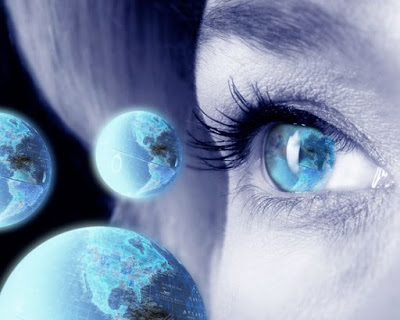 We already know that it is likely that we can manipulate time, this simply makes it part of out conscious capability or mindfulness.


Yet i also suspect that deep maturity is necessary for this and that few will be able to do this  or have permission.  In fact the fifth dimension may be truly continuous in the mathematical sense and synonymous to our idea of the Source.  In fact our consciousnesses may well be the fifth dimension.

The underlying field is shifting in intensity now. You can see it reflected in the craziness at large in the world, as (some) leaders are challenged by events beyond their control. Of course it gets played out in the microcosm, in the only way their consciousness can handle — playground, bully-boy threats and tactics. The ego does this when it senses a loss of power — when the identity is challenged. To me this is just the fizz and the froth, stirred up by great waves of energy, which are now being unleashed in Gaia’s higher dimensional flow. It’s vitally important that we don’t get blinded in the drama, distracted from the blindingly obvious. We must look through the words, wailings and flailings. We must see that which we are not, and attune instead to that which we truly are…
Mother Earth is already saved

Many people in the spiritual mainstream still speak of ‘saving Mother Earth’, that we must apply our energies to healing this great divine soul. I say to you…

She has now entered an irreversible event line, which will see the 3D cleansed of distorting density, and her magnificent 5D higher self unleashed, in all her renewed splendor.
And there’s nothing anyone, nor any ‘geo-engineering‘ organisation, will be able to do to stop it.
Although understandable, it’s still a degree naïve to think that such a starsoul as Gaia, billions of years old, would somehow depend on the helping hand of humanity (or else be controlled by it) when he’s been around mere nano seconds, in the great cosmic timescale. Yet there is a degree of truth in the misconception — Gaia is holding the space for enough souls to unwind themselves from the density, so that the shift may be as gentle, and all-encompassing as possible. (Here’s a perspective on the Shift from 3D to 5D Earth.)
Do not be distracted from the true Source

The important thing now, is that we recognise the underlying movement of energy, the intensity to which it has escalated — reflected in the insecurity shown by the controllers of society; then to progressively allow that energy to carry us internally, to break the bounds of the old consciousness — the anchoring ties — so that our very souls are set adrift, on the surging tide of the realigning flow.
So what about the machinations and machismo shown by our world ‘leadership’ — what part does that play in the Great Shift? Nothing. Nada. Zilch. Zip. The only thing that it can really do is to distract — to make the drama and spectacle so loud and noisy, that you stop looking within, to where the real truth lies.
And this will always be a choice — YOUR choice.

Your consciousness — YOUR soul — cannot be boxed and controlled by anyone,  unless YOU allow it to be. Remember, the Great Shift is an internal one, determined by YOU alone.
Forging of the Soul

That’s not to say the internal shift isn’t reflected into the outer world – of course it is. And it’s in the interplay — the apparent reality of it — that we get to decide who we are, and thereby forge the soul. So it’s not about disconnecting from the theatre, it’s about playing your role in it, but then rather than creating a tepid soap opera drama, what great masterpiece are you given to manifest?
Who are you?

How great can you really become?

What is your soul truly wanting to express?
Right now, all possibilities are open, all landscapes taking shape, that you may forge who you truly are, in this great spectacle unfolding before, and around, us. Watch-out as the machinations of the powers-that-be become ever bolder. But do not fear this either – as spiritual people, we know only too well, that those who try to control, are only ever caught up in greater karmic knots themselves.
So do not be blinded by the drama, do not be hoodwinked into believing it is more important that it really is. Above all, whatever rocket-sized false flags they try to unfurl, do not be distracted from the one true source of authentic creation – your very own being, at the core of you. (Also see: How Finding the Deeper Meaning Can Lead to a More Fulfilled Life.)
The rapid Shift into Higher Dimensional Consciousness

However, this doesn’t mean that somehow you disconnect from the outer world — who would be deciding to do that? Is not the One intimately engaged, right up until the very end? Does not the gazelle give of its all, right up until the moment where the physical is truly lost?
This is where there is the maximum gain to be had. For thousands and millions of years, the change on our planet has been relatively gentle and progressive, apart that is, from occasional big shifts — 5 mass extinctions to be precise. Now your eyes will lay witness to one of the greatest transitions possible — the rapid shift into higher dimensional consciousness.
The mirrors will thus get ever stronger as the old reality unwinds itself. Here is the opportunity then – the potential for rapid spiritual growth within yourself. Surrender. Let go into the strengthening flow of evolutionary change. Your soul will speak, ever louder, until it’s primal scream becomes undeniable. Go with it. Express into it. Unleash it. And this could just become the most miraculous shift of your existence…
In loving support,

(on behalf of Openhand)

p.s. If you resonate with the content of this article, and would like support in breaking the confines of your soul, check out… Openhand’s Worldwide Events and Courses.
Recommended articles by Open:

Openhand is a unique approach to spiritual evolution: integrating enlightened wisdom of spiritual masters through the ages, it is a way of tapping into the Benevolent Guiding Consciousness of the Universe and aligning with it in your life. It helps you unveil your True Self, remove karmic blockages and unfold your Divine Destiny. It leads to authentic, resilient and truly successful living.
Posted by arclein at 12:00 AM