An Australian town is in the grip of a paedophile epidemic with 90 per cent of school-age children suffering abuse, police have warned. 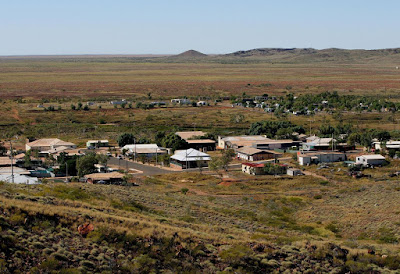 I do not understand how this might be accepted, unless the dynamics of a traditional hunter gatherer society happens to support it.  Yet it is also a center of alcoholism as well and that may have much to do with it.

My point is why?

All this is biologically wrong and is mere power abuse.  There is no natural reason for this except drunken lust that i understand.

One more nail for alcohol impairment.

An Australian town is in the grip of a paedophile epidemic with 90 per cent of school-age children suffering abuse, police have warned.

Thirty-six men have been charged with more than 300 offences against 184 children after an investigation uncovered a "staggering" rate of abuse in Roebourne, Western Australia.

The state's child protection minister said the scale of the epidemic was so vast that child sex abuse had become "normal" in the remote former gold rush town, which has a largely Aboriginal population of about 1,410.

Police have identified 124 suspects from Roebourne and the surrounding communities during the operation, which still has another year to run.

The confirmed victims amount to about 90 per cent of the town's school-age population, according to The Australian, and police say they expect more to come forward.

“You would have to say that, through the sorts of numbers we are starting to see,” she said. “It’s intergenerational. Many of these perpetrators were victims themselves.”

West Australian Police Commissioner Karl O’Callaghan said the scale of the abuse was the worst the state had ever seen and amounted to an "almost unrecoverable crisis".

“It’s a war zone out there and the victims are little kids,” he said.
British-born Mr O'Callaghan, who oversaw the first leg of the investigation, told The Australian: “I cannot understand why we are not as a nation more shocked. When you look at the percentages, in the history of police investigation in WA, I’ve never known that percentage of kids in a town of 1,500.

He added: "If it happened in a Perth suburb... there’d be more noise [but] because it’s an Aboriginal community and they are Aboriginal children we’re not as outraged by it."

Mr O'Callaghan said sex offenders in the town, where 80 per cent of people are on benefits, were spending welfare money on drugs and alcohol to lure children.

A high proportion of children in Roebourne are classed as vulnerable, according to news.com.au.
A government report published seven years ago found alcohol abuse, child neglect, violence, and crime among the town's were occurring at an alarming rate.

Roebourne, which lies in the Pilbara region 930 miles (1,500km) from Western Australia state capital Perth, was a booming mining town in the 19th century.

But was reduced to a virtual ghost town in the 1960s, when mining companies developed other towns to accommodate their workers, and was subsequently reclaimed by Aboriginals as a native township.
The benefits of lucrative iron ore mines nearby have largely passed by the town, which has an employment rate of half that of wider Pilbara.
Posted by arclein at 12:00 AM