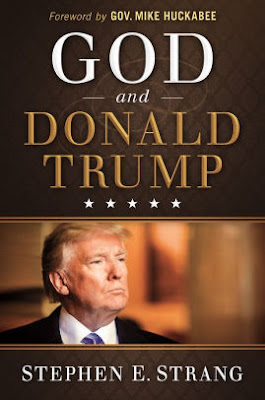 I had not fully realized just how completely the evangelicals have embraced Trump and that we have seen such a powerful shift in Christian sentiment.  I also have no doubt that Trump is a genuine follower of Christianity.  One does not attend for years with Norman Vincent Peale lightly.

I was fortunate enough to learn immediately that Trump was to win the presidency when that was completely impossible.  It saved me a lot of stressful hours.  What this actually means is that the other side or the spiritual world had predicted the need for him a long time ago and groomed him for it.  What i became aware of was that it was full press time.

Understanding that we are all guided by spirits while retaining free choice is important and richly confirmed. Mostly these are our ancestors. The big picture is not so obvious but also constantly referred to. So yes it is all part of a managed process that is hard to accept and often meant to also be invisible as much as possible.  Nothing is ordained but much is directed.

Considering the shockwaves that rocked the nation after Donald Trump’s surprising election victory, many pundits and analysts have struggled to make sense of what actually happened in the 2016 election. How did a political outsider and a man the whole world declared unelectable actually pull off such a feat? What secret force had he tapped into?

Throughout the run-up to the 2016 election, the mainstream media all but promised Hillary Clinton would win the White House by a landslide. The Democratic candidate was on her way to a historic victory and coronation as the first female president of the United States. Despite the history of scandals that littered her past, and the war she waged on women accusing her husband of sexual abuse, Hillary was trouncing her Republican opponent and safeguarding the liberal agenda for eight more years.

What was missing in the media narrative, however, was the backlash that was erupting in the heartland. Men and women in the fly-over zones were profoundly angry with Washington. They were frightened by the Obama administration’s lurch toward globalism. They were concerned about the impact undocumented immigrants were having on their communities, and they were rightfully afraid of the threat of radical Islamic terrorism.

Donald Trump’s ascendancy over a field of 16 other Republican contenders was a miracle in itself. He was loud, abrasive and unrestrained, but he was saying what the voters wanted to hear, and he said it with passion. In city after city, the crowds were eating it up. Multitudes showed up at Trump’s rallies demanding a new direction for their country and hoping the outrageous New York billionaire might be the answer to their prayers.

Yet for all that, it is astonishing that Trump managed to attract enough voters to overcome the odds stacked against him. Even more astonishing is the fact that he convinced the largest number of evangelicals in history to vote for him. Voters of all persuasions—including first-timers and disaffected Democrats—showed up for Trump. Record numbers of evangelicals and Catholics were apparently willing to take a chance, and the Never-Trumpers never slowed him down.

Since the election, I have been intrigued by the comments of people who believe God had something to do with it. One man told me he had never thought about the possibility before, but maybe there is a God because Trump’s election is a miracle. Others, trying to make sense of what happened, have said maybe God is doing something nobody understands. This makes me remember Benjamin Franklin’s declaration during the Constitutional Convention of 1787 when he said famously, “God governs in the affairs of men.” And it struck me that people all over America are starting to come to the same conclusion.

During the final presidential debate, Trump reaffirmed his pledge to appoint conservative jurists to the Supreme Court and promised he would work to overturn Roe v. Wade. Those statements influenced thousands of Christian voters who had been skeptical. As it turned out, the evangelical vote accounted for nearly a third of all the votes cast for Trump. More than 80 percent of the born-again Christians voted for Trump while just 16 percent voted for Clinton — the lowest number ever recorded for a Democrat presidential candidate.

Trump understood the importance of the Christian vote from the beginning. He courted their support, spoke openly about his faith, and accepted invitations to speak to the Christian media. He promised to champion the issues that would bring Christians to the polls, and it proved to be a winning strategy. This was a very different approach from the Clinton campaign, which essentially ignored the Christian vote. As noted by Darrell Scott, the African-American pastor who spoke at the Republican National Convention, it was the prayers of the faithful that put Trump over the top.

Since the election, I’ve spoken with many ministry leaders and prophetic voices who are convinced God brought Trump—who had said he was not interested in holding public office—to this place for this time. It may well be, as former congresswoman Michele Bachmann told me, that Trump was sent by God as a bull-in-a-china-shop to break up the globalist agenda and interrupt the Left’s campaign to remake America in their own image. A man with a milder, gentler, less aggressive personality could never hope to take on the forces within the political establishment and prosper, which is why Donald Trump was the perfect choice for this hour.

How the Trump presidency will turn out and where the country will be in four or eight years remains to be seen, but in my book, “God and Donald Trump,” I’ve taken a close and personal look at the spiritual dimensions of this election and interviewed dozens of politicians, pastors and prophets within the Christian community who see the hand of God in these events.

Some of them predicted a Trump victory years, even decades, before it happened, and that was something I wanted to explore. I wouldn’t begin to forecast what will happen tomorrow, but I am convinced God has a plan for America, and I’m equally convinced that, for this moment in our history, He has lifted up one of the most unlikely leaders anyone could imagine. Knowing that, the very best thing I can do now is to pray for the safety and success of President Trump, and hope that millions will join me.
Posted by arclein at 12:00 AM