The Method To The Moron’s Madness 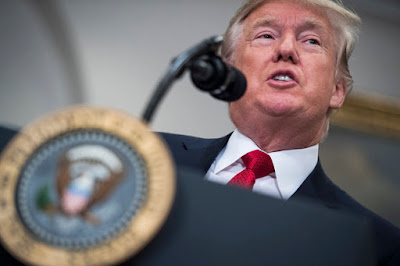 Of course there is a plan and it becomes steadily more apparent. However he is never going to disclose any of it until accomplished and he is perfect in his role of chief smoke screen. What is astonishing is how well it is working.

He puts the right folks in place, makes sure they understand the mission and then runs interferance while they execute.  It is no accident and it is the preferred modis operandi.  Also everything is disturbed and deemed to be in play.  That sets up a deal.  It even works in foreign affairs.

This is how you get things done while at the same time wrestling control of the government back into the hands of the Executive branch.

There are still many major things to come down here that will often be startling.  Yet he is on the road to assert GOP control during next year's midterms.  Thus what heis doing now is themsot possible prior to establishing legistlative control.  We will then see a barrage of legistlation.


The Method To The Moron’s Madness

The powers that be are underestimating Trump -- again.

WASHINGTON ― The conventional wisdom about President Donald Trump is clear enough: He’s an infantile, ignorant moron surrounded by a shrinking political base, a phalanx of enemies who used to be friends, and more investigators than the FBI Academy.

Washington reacts with alarm to his inflammatory tweets, and lately has made a parlor game out of chronicling his outbursts of anger, dismay and ignorance, as news organizations offer a cascade of vivid in-the-room portrayals of an out-of-control boy king.

Democrats hope against hope that he will be impeached over Russia. His approval rating is lower at this point in his term than any previous modern president’s. His former consigliere Steve Bannon has reportedly said Trump has only a 30 percent chance of lasting a full term.

But by the end of this week, it was clearer than ever that if Trump is a moron, he is a moron on a mission ― and with more method to his madness than his enemies understand or want to consider. The tweets are a useful distraction ― a kind of air cover for his carpet bombing of federal policy and programs.

In quick succession, the president and his small but focused dead-end gang have used administrative diktats to wreak havoc on clean air rules, immigration procedures, Obamacare and the Iran deal.

Each of these moves ― whether designed to serve the interests of big business, Tea Party xenophobes or the new Sunni-neocon alliance ― is unpopular. Trump doesn’t seem to mind. He knows what he wants.

Outraged critics immediately turned to Congress and the courts for help, but it isn’t clear whether they will get it.

Republican majorities in Congress are fairly thin, but they’re probably big enough to prevent legislative reversals of these and other Trump moves. On Iran, for example, Trump’s newest GOP enemy, Sen. Bob Corker (R-Tenn.), is working on a measure that includes some features of the president’s new, harsher approach, and Corker was opposed to the Iran deal when it was approved initially.

The president’s foes are going to court ― or have already gone to court ― over his attacks on Obama-era immigration, clean air and Affordable Care Act measures. But the critics face two potential problems.

First, many of the Obama-era rules are based on administrative actions, and are not armored by having been enacted by Congress and signed into law. That makes Trump’s own use of the bureaucracy, and his contempt for proper administrative procedure, somewhat easier to defend for anyone inclined to do so.

Second, Trump is fast filling vacancies in federal courts that will review these and other actions. He is doing so at a speedier clip than his predecessors. Names are fed to the White House in assembly-line fashion by Leonard Leo, the leader of the conservative Federalist Society and one of the least-known most powerful people in D.C.

The Senate is only in GOP hands by a margin of 52 of 48. But it’s rare for a Republican to waste a confrontation with Trump over a judicial nominee.

And Democrats’ efforts to delay or kill the president’s picks are at risk of being undercut further by the Republican leadership. After having been repeatedly humiliated in public and private by Trump, Senate Majority Leader Mitch McConnell (R-Ky.) now says he personally favors getting rid of a custom that allows any senator, even one in the minority, to scotch a nominee from his or her own state.

By the time challenges to ACA, the Environmental Protection Agency and other rules reach trial, the complexion of the court may well have changed in Trump’s favor.

Do Trump’s moves jeopardize the GOP’s control of the House or Senate (or both)? Maybe ― especially when it comes to health care, where premiums may rise and Democrats can blame it on Republicans and the president. But does he care? Not clear. He’s already at war with his own party, and his renegade buddy Bannon is preparing the ground for the next stage of the nihilistic anti-everything revolution. If the Democrats take control of Congress, there will at least be some partisan consistency in Trump’s attacks on it.

Just because Trump tweets furiously and seems easily distracted doesn’t mean that he and the die-hards around him ― like Office of Management and Budget Director Mick Mulvaney, speechwriter/foreign policy agitator Stephen Miller and EPA Administrator Scott Pruitt ― aren’t playing a long game.

One of the top minds on the mainstream left predicted confidently to me ― and somewhat dismissively ― that Trump would not seek a second term, should he not be impeached and convicted.

Maybe. But Trump’s father, who belittled him while repeatedly demanding that he grow up to be a “killer” and a “king,” died at the age of 93. Donald will be 74 in 2020. And he already thinks he is a king.
Posted by arclein at 12:00 AM