The West should support Kurdish desire for independence 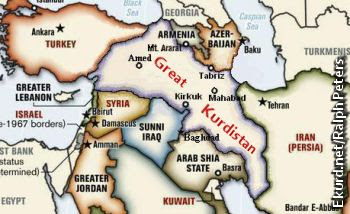 This is a touchy subject never welcome to outsiders who rarely have anything to gain worth the  abuse earned.  So we have a natural tendency to remain aloof.

However it must be observed, and i have said it before that an independent kurdistan provide a buffer between Turkey, Iran, Syria and Shite Iraq and acts as a natural staalizer and anchor in the region.  It is also a natural home for a massive force in place if that were truly needed.

This still must be combined with an international boundary commission with the power to remove peoples to new areas or at least assign citizenship over the new boundaries.  The same hold true in the Russian Marches were soviet dispensations have become thorny..


The West should support Kurdish desire for independence

The cause of Kurdish independence is one of the great taboos of western diplomacy. Regardless of where one’s sympathies lie, it’s a topic more consistently avoided than engaged. Yet, Monday’s historic referendum saw three quarters of the population participate. Early results suggest more than 90 per cent voted for an independent Kurdistan. This expression of the democratic will cannot be ignored.

On some level, global reluctance to accept an independent Kurdistan—which is also opposed by the Iraqi government in Baghdad—is a natural outgrowth of the anxiety many of us feel about the broader prospect of nations breaking up. This apprehension is informed by memories of civil war in the Balkans, genocide in Sudan, the partition of India, and countless other bloody battlefields of contested borders. Many western nations, including Canada, have active separatist movements of their own, which only feeds nervousness about equipping overseas secessionists with rhetoric and precedents that may someday be used against us.

Yet any nation that seeks to dissolve political bonds between itself and another is proposing a unique idea. Every secession movement occurs in a context particular to itself, bearing its own particular challenges and opportunities, and deserves to be considered on its own merits.

The West can add resolve to the Kurds’ efforts by fully endorsing their long-delayed dream of a free Kurdish state.

An objective analysis of present conditions in Iraq makes clear that the Kurdish desire for sovereignty is not an arbitrary or ill-considered fancy, but the logical and appropriate conclusion to an unsustainable, eight-decade status quo of political failure. The West can add resolve to the Kurds’ efforts by fully endorsing their long-delayed dream of a free Kurdish state.

Since the fall of Saddam Hussein in 2003, Iraq has faced unimaginable challenges in crafting a workable, federal democracy from a society left broken and demoralized by one of the most hideous dictatorships of the 20th century. Current Iraqi Prime Minister Haider al Abadi is more independent of Tehran than was his predecessor, Nouri al Maliki, yet the political environment that al Abadi must navigate remains heavily controlled by Iran’s sectarian influence. Iraq’s character as a free nation was destined to take many difficult years to solidify, and the conversation regarding what sort of constitution is best suited to its complex and diverse population remains ongoing, and led — appropriately — by the Iraqis themselves.

A Kurdistan operating as a self-governing “region” within an Iraqi system of federalism could never hope to be more than an interim solution to a dilemma dating back generations. For the Kurds, the compromise to participate within a federal Iraq had been brokered in good faith. Stability in the near term would lead to long term independence. Baghdad has broken with that faith, most recently by failing to ensure the expeditious supply of weapons to Kurdish forces confronting ISIS, and attempting to starve the Kurdish treasury by stalling oil revenue transfers.

Since the end of the first Gulf War, Kurdistan has managed its own largely autonomous government — originally protected by a US/UK-enforced no-fly zone — and in 2005, this authority was incorporated into Iraq’s first democratic constitution. Under the longtime leadership of Iraqi Kurdistan Region President Massoud Barzani, Kurds have used their quarter-century of self-governance to build an inspiring success story in a part of the world where such things are too rarely seen.

Economic prosperity has flowed to the region through the Kirkuk-to-Ceyhan pipeline, a testament to the leaders’ ability to overcome historic animosities with neighbouring Turkey in favour of mutually beneficial trade. Intelligent investments of the ensuing wealth, in turn, have provided Kurds with a society equipped with impressively modern social and physical infrastructure, and a safe standard of living that in many cases exceeds that of their neighbours.

Though their contentious political ambitions have proven a persistent obstacle to completely normal diplomacy, the Kurdish government has nevertheless established mature, respectful, peaceful relationships with key regional powers, including Israel. Prime Minister Benjamin Netanyahu supports Kurdish independence. Though not yet a perfect democracy, Kurdistan aspires to be a tolerant, pluralistic society with laws and traditions guaranteeing protection for its Christian population and other ethnic and religious minorities. Staffed by some of the world’s bravest soldiers, the Kurdish army, or Peshmerga, has played a decisive role in the war against ISIS, defending disputed areas even when Iraqi soldiers proved unwilling.

A strong Kurdistan has always been in Iraq’s national interest, and an independent Kurdistan will only strengthen Iraqi sovereignty.

Sadly, none of these achievements is yet fully recognized. As part of Iraq, Kurdistan lacks full legitimacy to exercise the economic, diplomatic, cultural, and military powers it has strenuously negotiated to use on a de facto basis for its very survival.

A strong Kurdistan has always been in Iraq’s national interest, and an independent Kurdistan will only strengthen Iraqi sovereignty. Yet Baghdad clings to the Kurdistan region, largely because of its oil wealth, even while post-Saddam era policies have often sought to limit Kurdish success rather than accelerate it. Liberated from each other’s domestic issues, and the endless distraction of negotiating the terms of a perfect political marriage, both states would be free to function as a mature alliance of equals — a relationship that, to some extent, they already enjoy today.

Even as the world lines up against Kurdish aspirations for sovereignty following Monday’s referendum, President Barzani has already indicated a vote to secede does not imply a unilateral declaration of independence, but will rather begin a process to afford Kurdish leaders a democratic mandate to enter into peaceful negotiations with Baghdad. As a practical matter, an independent Kurdistan bedecked in the full rights and symbols of sovereign statehood is likely to still be many years away.

At the moment, however, we must lack no moral clarity in affirming where our allegiances lie. The West should support the mandate the Kurdish people are bestowing upon their leaders: to guide the peaceful emergence of a confident Kurdistan, rather than the reinforcement of a bad marriage destined to fail. The cause of Kurdish freedom is right and just, and it is overdue that the West should say so.

Shuvaloy Majumdar is a Munk Senior Fellow at the Macdonald Laurier Institute, and former policy director in the office of the foreign minister. He lived in Iraq in 2006/7 and 2009/10, leading US democracy assistance initiatives.
Posted by arclein at 12:00 AM