Physicists send particles of light into the past, prove time travel is possible 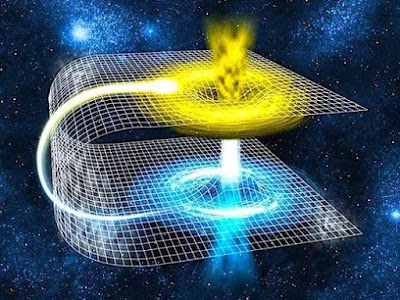 It is good to see us progressing on this problem.  I actually suspect that it will be solved easily and much sooner than anyone anticipates.

The reason i say all that is because i do have reports that could only be of the end of a temporal wormhole and likely come from the near future.  The physical nature conformed to my informed expectations and were not identified as such in the reports.  These were robust structures as well.

Add in the very real expanded presence of UFOs that appear to be popping in and out of time as well and the future is spending a lot of time watching us and gathering data without actually incurring paradox problems.

Real progress though will demand working with my Cloud Cosmology..

Physicists send particles of light into the past, prove time travel is possible


Scientists from the University of Queensland, Australia, have used single particles of light (photons) to simulate quantum particles travelling through time. They showed that one photon can pass through a wormhole and then interact with its older self. Their findings were published in Nature Communications.


The source of this time travel conundrum comes from what are called "closed time-like curves"(CTC). CTCs are used to simulate extremely powerful gravitational fields, like the ones produced by a spinning black hole, and could, theoretically (based on Einstein's theory of general relativity), warp the fabric of existence so that space-time bends back on itself - thus creating a CTC, almost like a path that could be used to travel back in time.


According to Scientific American, many physicists find CTCs "abhorrent, because any macroscopic object traveling through one would inevitably create paradoxes where cause and effect break down."
Others disagree with this assessment, however; in 1991, physicist David Deutsch showed that these paradoxes (created by CTCs) could be avoided at the quantum scale because of the weird behavior of these fundamental particles that make up what we call matter.


It's well known that at the quantum scale, these particles do not follow the rules that govern classical mechanics, but behave in strange and unexpected ways that really shouldn't even be possible.


Welcome to the world of Quantum physics, where pioneering Physicist Niels Bohr once said, "if quantum mechanics hasn't profoundly shocked you, you haven't understood it yet."


We choose to examine a phenomenon which is impossible, absolutely impossible, to explain in any classical way, and which has in it the heart of quantum mechanics. In reality, it contains the only mystery." - Richard Feynman, a Nobel laureate of the twentieth century (Radin, Dean. Entangled Minds: Extrasensory Experiences In A Quantum Reality. New York, Paraview Pocket Books, 2006.)


In the quantum world, paradoxes that we don't understand are common findings, but this should not deter people from taking this science seriously. Even Einstein didn't believe a lot of quantum theory, but I'd like to think that if he were alive today, he would definitely be having some fun, given all of the recent breakthroughs.


"It's intriguing that you've got general relativity predicting these paradoxes, but then you consider them in quantum mechanical terms and the paradoxes go away." - University of Queensland physicist Tim Ralph


Tim Ralph (quoted above) and his PhD student Martin Ringbauer simulated a Deutsch's model of CTCs, according to Scientific American, "testing and confirming many aspects of the two-decades-old theory." Although it's just a mathematical simulation, the researchers (and their team/colleagues) emphasize that their model is mathematically equivalent to a single photon traveling through a CTC. Nothing has actually been sent back through time though; to do that, scientists would have to find a real CTC, which has yet to happen as far as we know. Of course, there always remains the possibility that black budget science has.


Think in terms of the 'grandfather paradox,' a hypothetical scenario where someone uses a CTC to travel back through time to cause harm to their grandfather, thus preventing their later birth. Now imagine a particle going back in time to flip a switch on the particle-generating machine that created it - this is a possibility that these physicists say they have shown through their simulation.


You can read the specifics of the experiment here.


Why This Is A High Probability


In my opinion, there is no doubt time travel is possible. Why do I believe this? Well, it's because we know one hundred percent that superposition is real on a quantum scale.


"The maddening part of that problem is that the ability of particles to exist in two places at once is not a mere theoretical abstraction. It is a very real aspect of how the subatomic world works, and it has been experimentally confirmed many times over."


"One of the supreme mysteries of nature... is the ability, according to the quantum mechanic laws that govern subatomic affairs, of a particle like an electron to exist in a murky state of possibility - to be anywhere, everywhere or nowhere at all - until clicked into substantiality by a laboratory detector or an eyeball."


This means that one particle can exist in multiple states at one time. This is best demonstrated by the quantum double slit experiment. Recent experiments have also confirmed quantum entanglement, showing that space is really just a construct that gives the illusion of separation. One thing that suggests there is a high probably of time travel, in conjunction with the experiment mentioned in this article, is the fact that there are experiments showing that particles can actually be entangled through time.


This is illustrated by what is called the 'delayed choice experiment.'


Like the quantum double slit experiment, the delayed choice/quantum eraser has been demonstrated and repeated time and time again. For example, physicists at The Australian National University (ANU) have successfully conducted John Wheeler's delayed-choice thought experiment. Their findings were recently published in the journal Nature Physics.


In 2007 (Science 315, 966, 2007), scientists in France shot photons into an apparatus and showed that their actions could retroactively change something which had already happened.


This particular experiment illustrates how what happens in the present can change what happened in the past. It also shows how time can go backwards, how cause and effect can be reversed, and how the future caused the past.


"If we attempt to attribute an objective meaning to the quantum state of a single system, curious paradoxes appear: quantum effects mimic not only instantaneous action-at-a-distance, but also, as seen here, influence of future actions on past events, even after these events have been irrevocably recorded." - Asher Peres, pioneer in quantum information theory


Although we do not have access to a CTC quite yet, there are good reasons to believe that this type of time travel is possible at the quantum mechanical level, and that is why I chose to mention these other experiments, to show that 'time' doesn't even really exist as we think it does. You can access an excellent description of the delayed choice experiment using a cosmic scale explanation here, which makes it easier to understand.


Why these same quantum mechanical laws have not been observed on the macroscopic level is yet to be understood, but physicists are working on the problem. For example, in 2012 physicists David Wineland and Serge Haroche received the Nobel Prize in physics for demonstrating how "quantum weirdness" could not only exist at the subatomic micro-world level, but also show itself in the macro-world. At one time, superposition was only thought to exist in the inaccessible quantum world, but not anymore. We know it's possible, we just haven't figured out how. We do, however, seem to be getting closer to finding out.


Perhaps one day, we will have determined the key to this puzzle and be able to observe large objects like cars, humans, apples, and oranges behave in the ways that matter does on a subatomic level, and perhaps one day we will find a wormhole, or a CTC in space, to conduct actual experiments that go beyond theory. That being said, a lot of what used to be considered theoretical in quantum physics is no longer theoretical, like quantum entanglement.
Posted by arclein at 12:00 AM