Russia and China Are Right on North Korea? 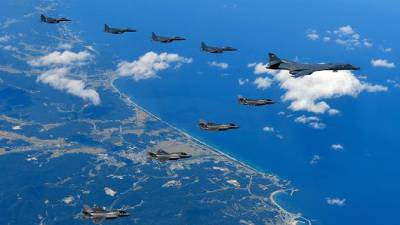 For fifty years, North Korea has made fools out of all negotiation and has used massive bluster to force concessions for little in return.  We still have no peace treaty either.

The Donald rightly surmised that two can also play this game because NK military options are actually bleak.  So now we have the Donald using bluster, which immediately got China and Russia to tighten up their borders with advanced ready forces.

Now the USA has the option of showing up and making the whole affair about only the USA and NK.  They can also have the SK rushing around attempting to stop it from going too far.

As i have posted in the past, it is possible to cause the NK to lose massive face over this while SK merely stays well out of the way.  The USA could even land troops in Russia in order to support their Russian friends.  Highly unlikely of course, but it is now possible.

In the meantime china is putting the economic pressure on NK because the USA actually has their back here and it will not be forever.

russia and china are right  on north korea

Russia and China must be applauded for trying to avert a nuclear holocaust on the Korean peninsula whilst upholding international law, and advocating for multi-party dialogue with the resumption of the 6 Party Talks

With the nuclear standoff between North Korea and the United States having heated up significantly over the summer, it has been the Governments of Russia and China who have sought to be the responsible, mature and wise international parties at the United Nations and throughout the international community.

It has been the brilliant diplomacy of Moscow and Beijing who have been the voices urging restraint, calm and dialogue unlike the insane, ridiculous and totally counter-productive rhetoric of the American President Donald Trump and the US Ambassador to the UN Nikki Haley.

The leaders of Russia and China must be given a strong round of applause for trying to avert a nuclear holocaust on the Korean peninsula whilst upholding international law, attempting to avoid a nuclear war and advocating for multi-party dialogue with the resumption of the 6 Party Talks (which have been in abeyance since 2009) and a cooling off period on the Korean peninsula with the suspension of the US-South Korea military exercises.

This is the right policy going forward for the welfare, safety and security of the Korean peninsula as well as regional and international peace and stability. The wrong course of action and the wrong policies of handling North Korea and the Kim Jong Un regime have been consistently followed by the Trump administration and its allies on the UN Security Council.

The American policy of constantly aggravating North Korea with US-South Korea joint military exercises designed to unsettle, disturb and provoke the North is counter-productive and has only increased tensions and the possibility of all out war in Korea which would be a complete disaster and must not be allowed to happen. The American policy of deploying THAAD has also been like a red rag to a bull in North Korea and again only adds to increasing tensions ans the likelihood of armed conflict. While Russia and China have been working with great effort to calm the situation down with the restoration of dialogue, cooperation and stability it has been unfortunately the Governments of the United States and to a certain degree President Trump's ally in British "prime" minister Theresa May who have actually in reality been increasing tensions, escalating the situation, antagonising the North Koreans and not helping to decrease tensions and deescalate the situation.

To be clear North Korea is also completely in the wrong and it is the prime actor that must stop its nuclear tests and enter into talks. Yet it is very difficult for the North to enter into the 6 Party Talks when the United States will not countenance such talks.

One could also mount an argument that the only reason the North Korean regime is behaving this way and seeking nuclear weapons is to preserve its own security as it in all likelihood feels extremely threatened especially in light of what happened with regards to Iraq during 2002-2003 and beyond and Libya after 2003.

The rhetoric of the Trump administration whether it be from the President himself or his Defence Secretary Mattis or UN Ambassador Haley has not been helpful and has been full of hyperbole, no doubt sabre rattling, but still it simply inflames and escalates an already difficult, tense and fragile international and regional security and humanitarian headache.

Imagine if the situation where reversed and it was Mexico on the United States' southern border acting in this way. Do you really think the American Government would want to deal with the fall out on its own door step of a nuclear obliterated Mexico and the tremendous ecological, environmental and human damage that would create.

I doubt it very much that the United States would take the same approach to such a situation if the rogue party playing up was right on its own southern border.

With regards to the role that the United Kingdom Government is playing, hopefully, it isa constructive role with the aim to help reduce tensions and deescalate the nuclear crisis on the Korean Peninsula not increase and exacerbate what is already a very delicate situation.

Time alone will tell if the current British "prime" minister Theresa May is fully committed to such a course and is actually exerting (what little influence and leverage) she may have over her new found best friend from January President Trump.

Mrs. May made great hay out of her early visit to hold hands with Donald Trump a week after he was sworn in. Let the international community see now the Anglo-American "special relationship" in action with the UK prime minister persuading the American President to change tack.
Posted by arclein at 12:00 AM