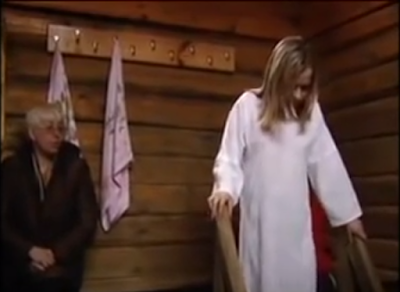 We have seen this story before, but it is worth a revisit.  I suspect that her visual range expanded into the ultraviolet sufficiently to allow this to happen.  We have had plenty of examples usually of folks actually seeing spirit bodies.
The phenomena has been readily confirmed by ample testing back in 2004 and let us leave it at that.  apparently she continues to help those in her community as well as able and that certainly makes good sense.
My key point is that this is possible and we do not know yet how to make it so for others, like all doctors. .

.
Meet the girl with x-ray vision and clairvoyance. She’s been tested, and the results are surprising

Have you ever dreamed about possessing super powers, such as having herculean-like strength, telekinesis, or even X-ray vision?

Meet Natalya “Natasha” Demkina, who was born in Saransk, Russia, in 1987. She’s know as “the girl with X-ray vision.”


Demkina claims that at the age of 10, she developed an ability that allows her to see into a person’s body, like an X-ray machine. With this ability, she is able to detect and diagnose people’s health issues. Demkina says this ability was unlocked after she was operated on to have her appendix removed.


“I was at home with my mother and suddenly I had a vision. I could see inside my mother’s body and I started telling her about the organs I could see. Now, I have to switch from my regular vision to what I call medical vision. For a fraction of a second, I see a colorful picture inside the person and then I start to analyze it,” says Demkina.

Apparently, when Demkina started experiencing these visions, she’d just stare at people. Her mother would tell her it isn’t polite to stare.


However, when her mother questioned her about her strange behavior, Natasha replied that someone who had recently visited them, whom she named, had something in his intestines.


The girl’s mother didn’t believe her at first. A few weeks later, however, she found out that this man whom her daughter had described had been diagnosed with a growth in his intestine.

After testing Demkina’s ability whenever friends visited their home, the girl’s mother was fully convinced that her daughter possesses “X-ray vision,” which allows her to see inside people’s bodies without the use of any medical apparatus.


Demkina has successfully detected cysts, ulcers, and cancers in numerous patients, who had requested the girl for a “health check.”

Demkina has been able to see down to the molecular level of “patients,” and has drawn pictures of what she’s seen.


There’s one particular account that is most interesting. A woman had been misdiagnosed by a doctor as having cancer. It was only when Demkina examined the woman she corrected the misdiagnosis and described what she saw as a “small cyst.” Upon a secondary examination by the doctor, it was found that Demkina had been correct—the woman did not have cancer.


News of Demkina and her X-ray vision spread throughout the local area by word of mouth. Many people turned up to test the girl’s ability, including doctors, reporters, and skeptics. Demkina was later invited overseas to further test her extraordinary vision.


In January 2004, Demkina was invited to England by British newspaper the Sun. She used her ability to examine Sun reporter Briony Warden, who had sustained multiple injuries after being hit by a car months earlier.


Prior to the meetup in North London, Warden had hid all clues about the accident she was involved in. The reporter then detailed what went on in the following account:


“Her pupils dilated and she seemed to go into a trance for a couple of minutes.


“Straight away she began identifying a pain site at the base of my spine which she called a ‘blockage.’


“In fact I have four healing spinal fractures and some nerve damage.


“I was amazed as she identified the two separate breaks and told me I had problems bending my knee joint.


“Both the tibia and fibula bones—the two below the knee—are broken,” Warden relayed to the Sun, as reported by AuntMinnie.

Whilst in England, Demkina appeared on the show This Morning to examine resident medic Dr. Chris Steele, who had been skeptical of the girl’s abilities.

The concerned Manchester GP went for a scan after being examined by Demkina, and revealed the diagnosis to his viewers.


“She got the hernias right, she got the kidney stone wrong, and the enlarged liver and enlarged pancreas wrong. But the gall bladder—that’s where some of these glands are. She said there were undulations or irregularities in the gall bladder, she couldn’t describe it,” said Dr. Steele, who partially acknowledged Demkina’s ability. “The specialist said maybe that’s what she was seeing and she didn’t know what lymph glands were, so she got some of it right.”


What’s noteworthy is that Demkina was in her mid-teens by this stage, possessed no medical knowledge, and could only describe what she saw. Moreover, her understanding of the human anatomy was understandably quite limited. So, Dr. Steele’s firsthand account is quite telling, which determined that Demkina was indeed able to see something; she just couldn’t describe it accurately in medical terms.


Further testing in Tokyo, Japan, revealed Demkina to have an additional ability—clairvoyance.


Professor Yoshio Machi of the Department of Electronics at Tokyo Denki University, said Demkina can “use her abilities . . . even on tiny passport photos . . . look at them and apparently see what the problem was. Her ability is not x-ray vision, but she definitely has some kind of talent that we can’t explain yet.”


Interestingly, in Chinese history, there are accounts of doctors who possessed supernormal abilities, such as Bian Que, a.k.a. the “Deity Doctor,” who could use his X-ray-like vision, and clairvoyance, to diagnose patients. Other incredible doctors who possessed extraordinary seeing abilities include Hua Tuo, Li Shizhen, and Sun Sumiao. Have you ever wondered why the ancient Chinese were able to so accurately map out the human body’s meridians?


Whilst the science behind these seeing abilities has not yet been explained, we can see that Demkina is doing pretty well so far with her extraordinary eyesight!