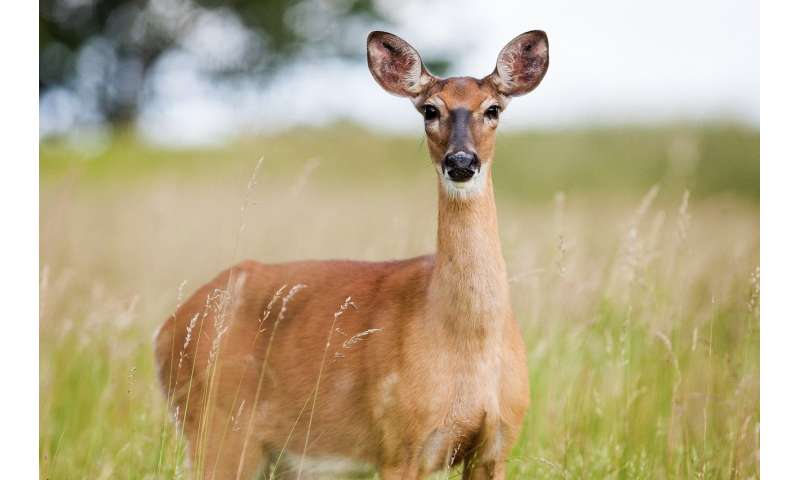 This is a surprising finding and it will perhaps encourage more attention to deer husbandry and ultimately to wolf husbandry.  Of course that is a problem that will not be fully mastered until we  restore rural human density along with mind sharing for animal management.
We must start a program that actually establishes herd title and a natural harvest and a wintering policy to suppress wolf populations while retaining enough to provide scavenging services.  This can be done with the science at hand even if it will be like herding cats.
The problem is now becoming big enough....
Deer prefer native plants leaving lasting damage on forests

https://m.phys.org/news/2017-10-deer-native-forests.html
When rampant white-tailed deer graze in forests, they prefer to eat native plants over certain unpalatable invasive plants, such as garlic mustard and Japanese stiltgrass. These eating habits lower native plant diversity and abundance, while increasing the proportion of plant communities made up of non-native species, according to a new study.

The findings were published in the open access, online journal AoB Plants. The study pooled data from previous studies conducted at 23 sites across the northeastern U.S.


By altering the balance of native plants in favor of a higher fraction of invasive plants, deer change forest plant ecology. In this way, invasive plants could have a bigger influence on the forest ecosystem and leave fewer opportunities for native animals who depend on the native plants. Such changes in plant community structures also have long-term impacts on forest regeneration, Averill said.


The researchers were surprised to find that the diversity of invasive species - the total number of non-native species - and the total abundance (or land cover) of invasive plants stayed the same in areas where deer grazed and where they were excluded. Since deer find some invasive species unappetizing in favor of more palatable plants, deer indirectly promote the success of these invasives, Averill said.


"The study results suggest we should try to maintain lower deer densities through hunting and fencing if the goals are to support more native plants and foster reduced relative abundance of introduced plants," Averill said
Posted by arclein at 12:00 AM