It Stalked Me From The Woods 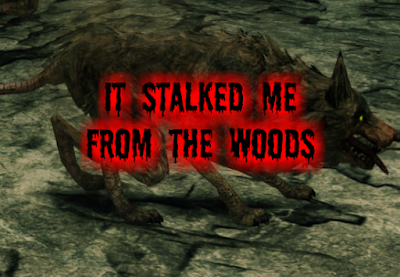 This is likely another 'Dogman' or Giant Sloth  interaction.  what is powerfully confirmed is that our so called Dogman is quite prepared to stalk a lone human who is not going to be able to get assistance.  Game on.


As I have already posted, a large number of disappearances of single men in the wilderness or near wilderness is best explained by this creature and its unique  methods which entail caching the victim, a long way away from the actual kill site.


In this case the intended victim sensed the risk and moved to protection.  He did observe the creature and its fearlessness and effective wariness.  These creatures likely understand the risk of rifles but also rely on either pure ambush or a rapid contact leap.
.

It Stalked Me From The Woods

“I had a strange experience with a large canine back in 2008 in southern Missouri. I was hunting deer in a very wild area between the Eleven Point and Little Creek rivers. I was on a large tract of hunting land that is family-owned and is a wide ridge between the two rivers. It was late in the season and everyone had gone home except me and a cousin who was hunting the better part of a mile from me.

At about 3 pm I started to get a feeling that something was wrong. It is a familiar feeling and I have learned to trust my instincts over the years. I felt I was being watched and started to feel exposed while wearing the required orange clothing. The sun sets about 5 pm at this location this time of year and I decided to get back to the cabin before then while keeping an eye on my six. Just as I got to the cabin, as it was turning dusk, I heard a howl from the direction I had just come...maybe 300 yards back. It was far too deep to be a coyote which there are many of in the area. This sort of confirmed my suspicions but I forgot about it as I was at the cabin now.

About 7 pm I stepped out onto the front porch to relieve myself and it was pitch dark. Can't see your hand in front of your face dark. Luckily, I had just finished my 'business' when I heard something coming straight for me through the tall grass that surrounds the cabin. It wasn't running fast, just steady and sure of itself. I quickly stepped back inside and closed the door. I then heard something heavy jump onto the porch and start to scratch at the base of the door for at least 30 seconds. My cousin was on his cellphone and I couldn't find a flashlight to look. By the time we had found a flashlight it had left.

Fast forward to 2 am. I woke needing to relieve myself again and went out onto the back porch but took a headlamp with me this time. Sure enough I heard it get up out of the brush about 150 feet away and start coming straight for me. I let it get about half way to me before turning on the headlamp. It very quickly skirted the light, but I saw a large canine shape. That was the last encounter. It was very persistent and it occurred to me later that it may have thought I was alone."
Posted by arclein at 12:00 AM