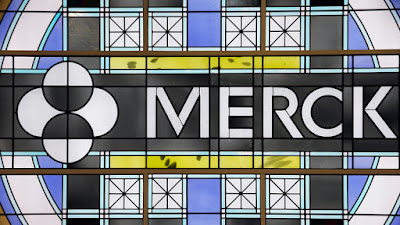 In the end, Merck effectively stole the data and applied it to their own patent work.  They got caught and have now been made to pay.

The drug is important as it generally cures Hep C, but it was never Merck's in the first place

This is more important in terms of revealing the corporate culture involved here..

The public already holds drug manufacturers in low esteem – and now they’ve got more fuel for their opinion.  Federal Judge Beth Labson Freeman of San Jose last week found that Merck & Co. lied to a business partner and to the court itself. Freeman threw out a patent infringement judgment Merck had won against Gilead Sciences, and overturned a $200-million jury award.
This was a big deal, involving one of the most profitable drugs on the market today — Foster City, Calif.-based Gilead’s blockbuster Sovaldi treatment for the hepatitis C virus — and the world’s fourth-largest drug company Merck.

It’s also an enormous black eye for Merck, whose activities the judge said consisted of “systematic and outrageous deception in conjunction with unethical business practices and litigation misconduct.”
But the case does more than raise questions about the integrity of a huge corporation. It’s a window into the extent to which the nation’s overworked patent inspectors can be misled by applicants backed by big corporate war chests in pursuit of  billions of dollars in potential profits.
Legal experts have wrestled with that issue for years. “Catching fraud or other forms of cheating in the patent process is unlikely given the practical limits of the U.S. Patent and Trademark Office,” T. Leigh Anenson and Gideon Mark of the University of Maryland wrote in a 2013 law review article.
Often, courts have punished applicants who obtain patents through cheating by leaving the patents in place, but making them unenforceable by the wrongdoer.
That’s what Judge Freeman did — she barred Merck from collecting a dime from Gilead for the two patents it supposedly infringed. “People have referred to unenforceability as the atomic bomb of patent lit,” says patent expert Jacob Sherkow of New York Law School.
Merck itself alluded to the value of a strong patent system in announcing its court victory in March, when it spoke sanctimoniously about how the jury verdict “upholds patent protections that are essential to the development of new medical treatments.” A spokesman for the company reiterated the point last week in commenting on Judge Freeman’s ruling. But Merck insisted that the hepatitis C drugs at the heart of the case “required many years of research and significant investment by Merck and its partners.”

Freeman’s ruling has given Gilead the upper hand, for now, in trying to settle the dispute with Merck, which plans to appeal.
The evidence examined by Freeman strongly suggests that Merck flagrantly manipulated the patent process to gain unfair advantage.

Sovaldi and its related Gilead product, Harvoni, have been huge moneymakers for Gilead, bringing the company more than $20 billion in sales since the first drug was introduced in 2013. There’s no mystery why, since the drugs almost invariably cure hepatitis C with minimal side effects – a big improvement over previous treatments. The drugs are so effective that Gilead’s stratospheric pricing for them has become Exhibit A in the national controversy over the cost of drugs.

The case began in 2013, when Merck claimed that its patents covered Sovaldi and demanded royalties and license fees from Gilead. Gilead refused, and sued to declare Merck’s patents invalid. The trial jury  rebuffed that argument and ordered Gilead to pay Merck $200 million, plus future royalties – far less than the $2 billion that Merck had sought.

“That would have been the single largest patent damages award in U.S. history,” Sherkow says. Across the biotech industry, opinion was that Gilead got off easy.

But Gilead really drew blood when it accused Merck of coming to the patent battle with “unclean hands.”

Its claims stemmed from Merck’s interactions with Pharmasset, the New Jersey biotech firm that had invented Sovaldi and was acquired by Gilead in 2011 for $11 billion. Gilead’s story left Judge Freeman appalled.

She described the company’s behavior as “systematic and outrageous deception in conjunction with unethical business practices and litigation misconduct.” That conduct included “lying to Pharmasset, misusing Pharmasset’s confidential information, breaching confidentiality and firewall agreements, and lying under oath at deposition and trial.”

Much of the judge’s ire was directed at retired Merck patent attorney Phillippe Durette, who was working on patents for antiviral drugs during a period when Merck was trying to reach its own deal with Pharmasset.

Merck signed a nondisclosure agreement, or NDA, with Pharmasset, pledging not to use the latter’s secret information for any purpose other than to decide whether to pursue the relationship. Pharmasset turned over information including the structure of a key formulation to a single Merck scientist who was to be “firewalled” — that is, he couldn’t discuss it with anyone in Merck’s own drug development loop.

That worked until a March 2004 conference call between Merck and Pharmasset officials aimed at advancing a possible deal. Pharmasset was willing to reveal details of its formulas on the call, because it was led to believe everyone on the call would be subject to the confidentiality agreement. But the participants included Durette, who wasn’t firewalled and was in a position to turn what he heard into a potential goldmine for Merck.

According to Freeman, that’s what happened. Durette, who she said shouldn’t have been allowed on the call in the first place, should immediately have been excluded from Merck’s existing hepatitis C drug development program. Instead, he rewrote Merck’s earlier patent claims so that they would apply to Pharmasset’s upcoming release of its hepatitis-C drug.  In 2011, Merck even threatened Pharmasset with a patent lawsuit over the drug.

What irked the judge even more, she ruled, is that Durette lied.  In a deposition, he repeatedly denied having been on the call. He recanted at trial only after he was confronted with notes taken by a Pharmasset employee during the call, proving that he had participated. At that point, he pleaded a faulty memory.

Freeman didn’t buy it. “It is overwhelmingly clear...,” she ruled, “that Dr. Durette sought at every turn to create the false impression that Merck’s conduct was aboveboard.” She blamed Merck, which she said “sponsored and encouraged” his conduct, then sought to minimize its importance by attributing the fiasco to “the failed memory of a retired employee.”

Adding to the temerity of the big drugmaker, it originally sued Gilead for $2 billion before having to settle for $200 million. Now, pending appeal, it won’t get even that much for its patent claims, and its reputation for integrity will carry a value of less than zero.