Shanghai to San Francisco in 100 minutes by Supercavitating Submarine 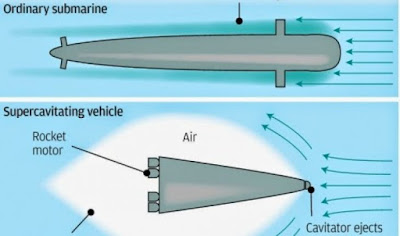 We already know that UFO's are traveling at speed underwater. That happens to be an excellent proof of concept which explains this ongoing development.

At least the Chinese are talking about it all.You may be sure that a whole range of weapon systems has been under development by the USA for decades. From this we do get real capability indications and theoretical possibilities.

Quite exceptional really and could justify commercial deployment as well. Sitting in a high speed torpedo like vessel for a couple of hours is practical. .

[South China Morning Post] China has moved a step closer to creating a supersonic submarine that could travel from Shanghai to San Francisco in less than two hours.

A 650 MW thermal integrated molten salt reactor with a supercritical CO2 turbine would have about 400 MWe of power with about 200 tons of weight. This would be about 2 kW per kg.

There have been other molten salt designs with about 18 KW of power per liter. Those are early generation designs and the engineers believe that they can ultimately achieve power density of about 100 kW per liter.

On the issue of wildlife in the ocean, the submarines would need to find a depth where there is less sealife. There would also be the need for satellite and other technology to scan the path ahead. Also, beacons could be placed that make sealife clear out for a specified safe path.

New technology developed by a team of scientists at Harbin Institute of Technology’s Complex Flow and Heat Transfer Lab has made it easier for a submarine, or torpedo, to travel at extremely high speeds underwater.
Li Fengchen, professor of fluid machinery and engineering, said the team’s innovative approach meant they could now create the complicated air “bubble” required for rapid underwater travel. “We are very excited by its potential,” he said

Water produces more friction, or drag, on an object than air, which means conventional submarines cannot travel as fast as an aircraft.

However, during the cold war, the Soviet military developed a technology called supercavitation, which involves enveloping a submerged vessel inside an air bubble to avoid problems caused by water drag.

A Soviet supercavitation torpedo called Shakval was able to reach a speed of 370km/h or more – much faster than any other conventional torpedoes.

The United States is known to be developing vessels and weapons that employ supercavitation technology. Technology reportedly under development at the Office of Naval Research includes a 6.25-inch-diameter self-protection weapon under study for a supercavitation counter-torpedo to defend surface ships and submarines.

The U.S. Navy Advanced High Speed Underwater Munition program has already demonstrated the effectiveness of supercavitation high-speed underwater bullets. When fired from an underwater gun, these projectiles have successfully broken the 767 mph speed of sound in water. Supercavitation bullets have also been developed for use in mine-clearance when fired from a helicopter

In theory, a supercavitating vessel could reach the speed of sound underwater, or about 5,800km/h, which would reduce the journey time for a transatlantic underwater cruise to less than an hour, and for a transpacific journey to about 100 minutes, according to a report by California Institute of Technology in 2001.

However, supercavitation technology has faced two major problems. First, the submerged vessel has needed to be launched at high speeds, approaching 100 km per hour, to generate and maintain the air bubble.

Second, it is extremely difficult – if not impossible – to steer the vessel using conventional mechanisms, such as a rudder, which are inside the bubble without any direct contact with water.

As a result, its application has been limited to unmanned vessels, such as torpedoes, but nearly all of these torpedoes were fired in a straight line because they had limited ability to turn.

Li said the team of Chinese scientists had found an innovative means of addressing both problems.

Once in the water, the team’s supercavitation vessel would constantly “shower” a special liquid membrane on its own surface. Although this membrane would be worn off by water, in the meantime it could significantly reduce the water drag on the vessel at low speed.

After its speed had reached 75km/h or more the vessel would enter the supercavitation state. The man-made liquid membrane on the vessel surface could help with steering because, with precise control, different levels of friction could be created on different parts of the vessel.

“Our method is different from any other approach, such as vector propulsion,” or thrust created by an engine, Li said. “By combining liquid-membrane technology with supercavitation, we can significantly reduce the launch challenges and make cruising control easier.”

However, Li said many problems still needed to be solved before supersonic submarine travel became feasible. Besides the control issue, a powerful underwater rocket engine still had to be developed to give the vessel a longer range. The effective range of the Russian supercavitation torpedoes, for example, was only between 11 km and 15 km.

Background Material on the Engine Requirements

In the 2003, Proceedings of the National Symposium on Ocean Electronics, there is a discussion on powering a supersonic submarine.

U.S. naval reactors are pressurized water reactors, which differ from commercial reactors producing electricity in that:

* they have a high power density in a small volume and run either on low-enriched uranium (as do some French and Chinese submarines) or on highly enriched uranium (over 20% U-235, current U.S. submarines use fuel enriched to at least 93%, compared to between 21–45% in current Russian models, although Russian nuclear-powered icebreaker reactors are enriched up to 90%),

* they have long core lives, so that refueling is needed only after 10 or more years, and new cores are designed to last 25 years in carriers and 10–33 years in submarines,

* the design enables a compact pressure vessel while maintaining safety.

Terrestrial Energy (of Canada) is trying to develop integral molten salt nuclear fission reactors.These nuclear reactors would have about 20-200 times less volume than conventional nuclear fission reactors. The US, Europe and China are trying to develop supercritical carbon dioxide turbines that would have 100 times less volume than regular steam turbines. The Hammer’s Slammers Science fiction nuclear hovertank would be enabled with the two technologies that are under development (molten salt reactors and supercritical CO2 turbines.

By shrinking the nuclear reactor and the turbine by 100 times, plenty of other vehicles are made possible. Various nuclear ships and submarines can be revamped. Also, space bases with nuclear become more possible with one launch.

The 650 MWth IMSR (Integrated Molten Salt) reactor is about the same size as the smAHTR (125 MWth) reactor.

So the IMSR with supercritical CO2 turbines would have almost 3 times as much power in an area about 16 times less area. In the range of 150-200 cubic meters and about 200-400 tons.

A 650 MW thermal integrated molten salt reactor with a supercritical CO2 turbine would have about 400 MWe of power with about 200 tons of weight. This would be about 2 kW per kg.

There have been other molten salt designs with about 18 KW of power per liter. Those are early generation designs and the engineers believe that they can ultimately achieve 100 kW per liter.

If you liked this article, please give it a quick review on ycombinator or StumbleUpon. Thanks
Posted by arclein at 12:00 AM