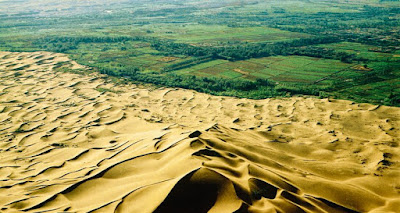 The scale is huge of course and from the map we can see just how fully they have gone into going this.

The base is now well set and adding passive atmospheric water collectors can hugely enrich the whole program.  Perhaps enough in time to allow further reduction of the desert.

All good.  something this large is needed in the Sahel at least.
.
THE LUSH BILLION-TREE SPECTACLE OF CHINA'S GREAT GREEN WALL


A DESERT DOESN’T sound like the most promising place to plant a tree. Yet, since 1978, China has planted at least 66 billion of them across its arid northern territories, hoping to transform its sandy steppes and yellow dunes into a Great Green Wall.


Ian Teh documented this epic undertaking while traveling through northern China last year. His expansive photographs show workers tending saplings, filling irrigation tanks, and blasting young trees with water. “Planting trees sounds great on paper, but you can feel skeptical,” Teh says. “But in person, it was impressive.”


The tree-planting strategy is a massive attempt to help fight desertification. Roughly a million square miles of China—a quarter of the country—is covered in sand. Drought, deforestation, overgrazing and other problems threaten an additional 115,000 square miles, fueling brutal sandstorms that regularly blast cities like Beijing and Dunhuang. Many scientists are skeptical planting trees will make a difference in the long run. But China’s State Forestry Administration claims the measure has reduced sandstorms by 20 percent and desertification by nearly 5,000 miles in recent years.


Teh lives in Malaysia but works throughout Asia, documenting humans’ impact on the landscape. Over six days in May 2016, he photographed tree-planting schemes in the Gobi Desert in northern China. They seemed successful in places like Duolun County, some 220 miles north of Beijing, where the government has planted 2.6 million trees over the past 17 years. The place felt pastoral, almost lush. Teh had to stop his car on the side of the highway and hike several minutes over dunes just to see where the wind-blown grass ended and the sand began. “To be honest, it was hard to imagine it was ever a desert at all,” he says. For contrast, he also flew some 800 miles southwest to the Tengger Desert, one of the places in China most affected by desertification. Outside the city of Wuwei, farmers struggled to work the dry soil. "It’s incredible to see them tilling land and everything around is dusty," he says.


His images capture the two extremes, showing the immensity of China’s problem and the unlikely, grand solution it’s concocted to solve it. They’re as surreal and otherworldly as China's Great Green Wall itself.
Posted by arclein at 12:00 AM