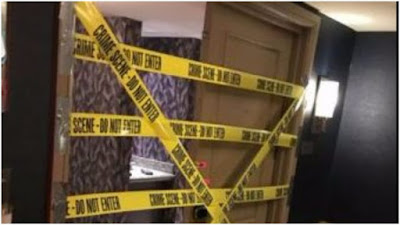 This smelled like a failed arms sale deal from the get go.  Now enough of the pieces are falling into place to make it fairly certain.  The two windows blown out pretty well assures us that there was more than one shooter.

That the bulk of the firing came from a real machine gun tells us that a true sniper nest had been set up somewhere.  Possibly the other window but then they would have the problem of escaping with the hardware and they obviously did not simply dump that in the gun dealer's room.

That one machine gun provided ample cover sound to allow any number of ordinary weapons to also be fired during the event.  This allowed possibly several other participants to fire into the crowd and then pack up and fade into the crowd.  These would all be on the ground.

This was a planned take-down of an FBI operative whose cover had been blown by a cadre of ISIS operatives and possibly a couple of local followers.  The FBI was badly burned here and has much to explain, not least if they are completely innocent.

Stephan Paddock was clearly a careful businessman and not an obvious gambler unless it was his cover.  That meant the casinos worked with him to return his losses and to allow him to conduct his arms business..

Hotel Guest Next To Vegas Shooter Just Blew Investigation WIDE OPEN With What He Said He Saw
October 4, 2017 Elizabeth Jr. Charles
The city of Las Vegas became a gruesome crime scene 3 days ago in what’s being dubbed the deadliest mass shooting on U.S. soil. Sixty-four-year-old Stephen Paddock holed himself up in a casino hotel room with 10 guns, where he shot down on concert goers below, massacring 58 and wounding 527 others. Frustratingly, there seems to be more questions than answers at this point involving the shooter’s motive.

But now the narrative of the case has been blown wide open after a man who was staying next door to the shooter at the Mandalay Bay is coming forward with the disturbing thing that he witnessed while the massacre was being carried out by supposedly one single shooter.

When frantic calls began to pour into 9/11 that night with news of an active shooting taking place at the concert near the hotel, initial eye witnesses claimed that there were multiple shooters firing down upon the crowd. But for some reason, the mainstream media keeps pushing the narrative that there was only one shooter involved, even though mounting evidence is starting to indicate otherwise.

Australian man Brian Hodge was staying in the room next to Paddock that fateful night, and what he witnessed is destroying the mainstream media’s narrative that the massacre involved only one shooter. After hearing gun fire coming from his floor, Hodge rushed outside and hid in the bushes and called for help. Hodge then said something shocking, certain that this massacre was not carried out by Stephen Paddock alone.

“There were multiple people dead and multiple shooters.

I was just hiding waiting for police to come get us. We were hiding in the bushes outside waiting for the police.”

Adding, “It was a machine gun from the room next to me. My floor is a crime scene.

[ sounds like the real machine gun was extracted. - too valuable.  The guns found were steven's and his sales tools.  arclein ]

They killed a security guard on my floor.”

Hodge isn’t the only person who believes there was more than one shooter that carried out the massacre.

Many people are feeling uneasy about the official story that’s being pushed, and are starting to suspect there’s something extremely fishy with the narrative the mainstream media is telling everyone.

Why would an accountant, with no criminal history, who according to his own family, didn’t even like guns, suddenly decide to commit the worst mass-casualty shooting in United States history? Even Republican Congressman Trey Gowdy is scoffing at the narrative that this was carried out by a lone shooter.

An unproven theory currently being circulated by someone claiming to be an FBI agent is downright chilling, and supports the theory that there was in fact more than one shooter.

In an email that was supposedly sent by an FBI agent seeking to remain anonymous, the text reveals a conspiracy of Benghazi-level proportions.

The shooter was actually a FBI agent who was involved in a gun running scheme similar to what happened in Libya. But things unfortunately didn’t go as planned.

A screenshot of the email is below, whose text reads:

“The LVMPD knows the motive behind the attack, but the FBI will not allow us to release the motive because it implicates the FBI in illegal arms deals and supplying arms to ISIS terrorists within U.S. borders.”

“Stephen Paddock was an undercover FBI agent who participated in multiple illegal arms deals in the Las Vegas area in a gun running entrapment scheme similar to Fast and Furious.

Paddock thought he was engaging in another routine arms transfer, but ISIS operatives who were going to meet him learned about the entrapment scheme and Paddock’s true identity. They killed him and carried out the massacre, and then fled the scene.”

The email concluded that people within the police department are “disgusted” and are “pushing for this information to be released to the public.”

While this email cannot be confirmed as being written by an actual FBI agent at this time, this theory makes perfect sense. It’s entirely possible that this was a gun-running scheme gone wrong, and once ISIS realized they were being set up, they decided to retaliate.

Remember that ISIS immediately claimed responsibility for the attack, although they wouldn’t provide any proof as to why.

After months of targeting Las Vegas, perhaps ISIS had the opportunity to finally carry out an attack after being double-crossed by an FBI agent. Back in May, ISIS released a 44-minute-long video of the strip in Las Vegas, calling on their supporters to carry out attacks on this area.

“The 44-minute-long video released in May showed footage of the Las Vegas strip from 2015, calling on its supporters to conduct attacks with knives and vehicles, everyday weapons that its supporters have already used many times in the West over the past several years,” Newsweek reported.

What do you all think? Was there more than one shooter? Was this massacre retaliation of a gun-running scheme meant to entrap ISIS that went horribly wrong?

We need to keep demanding answers, because it’s becoming apparent that the mainstream media is pushing an agenda, and we all know that the media’s agenda is never to report the truth, or for the benefit of the American people.
Posted by arclein at 12:00 AM