STUMBLED UPON: Do We Have A Cure For Lou Gehrig’s Disease? 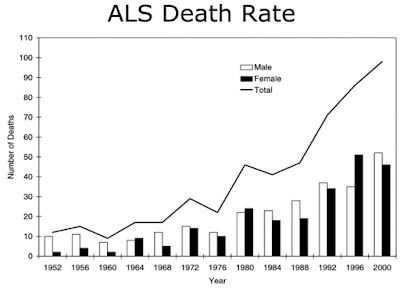 We have just written up an item on lyme disease causing MS and others.  Is this all related?

The take home is to check out your mineral profile.

What is indicated to me is that all folks diagnosed with a neurological condition should put themselves on a tetracycline course that lasts three years.  There are protective cysts involved here and you want to catch as much as possible.  I have actually done this and observed some positive effects related to the prostrate.  Yet this shows that such a program should protect the brain from long lived cyst forming problems.

This is quite safe and believed perfectly useless today as short lived bugs have immunity to it.  Obviously unlikely for long lived problems for which it now preferentially attacks..

STUMBLED UPON: Do We Have A Cure For Lou Gehrig’s Disease? (Amyotrophic Lateral Sclerosis)

Amyotrophic lateral sclerosis or ALS (aka Lou Gehrig’s Disease after this famous baseball player died of the disease in 1941) is a disease without a known cause or cure. It progressively disables motor neurons and often a victim dies by choking to death or can’t expand their lungs and succumbs by asphyxiation.

Researchers writing in the Annual Review of Biochemistry have been investigating SOD1—superoxide dismutase 1 – an internally made enzymatic antioxidant and ALS. When the human body is biologically stressed SOD-1 is produced from copper-zinc precursors. Somehow in the development of ALS zinc-copper SOD1 becomes toxic, destroying motor neurons (nerves used for movement).

In a more recent report published in Neurobiology of Disease we learn that the provision of copper lengthens the lifespan of ALS mice by 25%.

Then, apparently on the cusp of a cure, researcher Stephen Byer indicates a zinc/copper drug is being tested and winks his eye to say, if you read between the lines, that maybe ALS patients ought to be taking copper and zinc supplements.

There is no way to get enough zinc from the diet. Dr. Byer goes on to spell out what to do: “Copper and zinc pose little to no risk and have few side effects and can be purchased at most health food stores as well as online. The recommended dosage is 90-100 mg of zinc and 2-3 mg of copper, taken twice daily. In other words, don’t wait for the copper/zinc drug.”

With all of the above information as background information, in my investigations of natural remedies for helpless diseases, I stumble across the following case report published in BMJ (British Medical Journal Case Reports.

The abnormal blood mineral levels were traced to use of a zinc-based dental fixative paste used for his false teeth. The dental fixative was withdrawn and supplemental copper provided. The progressive course of the disease was halted though the patient remains in a wheelchair.

If this is a cure of sorts, then one wonders why it has taken so long to find it? The report published in BMJ Case Reports goes unnoticed by modern medicine as it pursues lucrative monoclonal antibody (mab) drugs to treat every disease, which is an admission many of the diseases these drugs treat are autoimmune in nature (body against itself). Would the provision of zinc or zinc/copper eradicate the need for the expensive monoclonal antibody drugs (47 FDA approved) that mount up to $125 billion of sales annually?

No wonder modern medicine ridicules and expresses disdain for natural remedies like zinc and copper. They have made an entire industry out of crafting synthetic drugs to overcome what amounts to a mineral imbalance.

As a report published at Atlas of Science points out, the lack of zinc (or balance of zinc with copper) is at the heart of autoimmune disorders. We are talking here about multiple sclerosis, psoriasis, lupus, rheumatoid arthritis, Type I diabetes, Hashimoto’s thyroiditis, and a long list of other autoimmune diseases that are often initially addressed by prescribing steroidal anti-inflammatory drugs(Decadron) that only douse the flames (symptoms) of these diseases, never cures them.
Posted by arclein at 12:00 AM

My father had ALS (amyotrophic lateral sclerosis) for 3 years His first symptoms were weakness in his hands and losing his balance which led to stumbling and falling. He never lost the ability to swallow or breathe. His one hand, then his legs, were affected first; then his arms. The Rilutek (riluzole) did very little to help him. The medical team did even less. His decline was rapid and devastating. The psychological support from the medical centre was non-existent and if it were not for the sensitive care and attention of his primary physician, he would have died . There has been little if any progress in finding a cure or reliable treatment. So this year his primary physician suggested we started him on Natural Herbal Gardens ALS Herbal mixture which eased his anxiety a bit,We ordered their ALS herbal treatment after reading alot of positive reviews, i am happy to report this ALS herbal treatment reversed my dad condition. His quality of life has greatly improved and every one of his symptoms including difficulty in walking and slurred speech are gone. Their official web site is ww w. naturalherbalgardens. c om He will be 74 soon and can now go about his daily activities