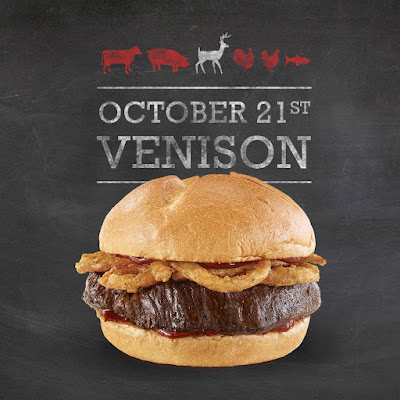 This is part of the answer.  We need a go-to utilizer of our developing game stocks. and Arby's is perfect inasmuch as they have enough distribution which matters most, yet small enough to absorb the early low supply easily enough.

Arby's has always needed an extra cachet to expand their market.  Their sliced beef was always superior, but not enough to bring in a crowd.  Yet you can see how Wendy's has remained seriously competitive by steadily improving their offerings.   Today even MacDonalds has gotten serious.

Going after venison alone is a huge market and serving up a venison based menu is really needed.  No single restaurant has the marketing reach to do this.  I would also lay on a line of ground moose meat burgers as well.

Do all; that and you will never have to advertise.

Arby’s is living up to its “we have the meats” slogan with the nationwide debut of its venison sandwich.

The sandwich will be available on Oct. 21 in 3,300 restaurants, according to USA Today. In addition, the fast-food chain will begin selling limited-edition elk sandwiches in three restaurants in Colorado, Montana, and Wyoming.

The venison sandwich features a thick-cut venison steak and crispy onions with a berry sauce on a toasted roll. It will only be available while supplies last.

“If people are interested in trying the sandwich, the only way to guarantee they can get one is to get there when we open or a little before and make sure they are in line, just like the folks last year,” said Arby’s Chief Marketing Officer Jim Taylor.
Posted by arclein at 12:00 AM