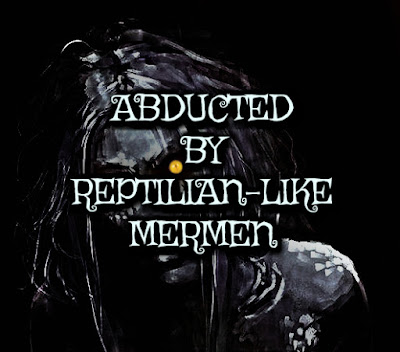 This is a unique report on reptilian like alien creatures not clearly of Terran descent.  All other reptilian reports are just as clearly of Terran descent.  We have a remarkable observation of a space ship and of a large crew.
At the same time it is noted that this could be the source of mermen reports.  The whole merman meme could well be alien to this planet, all of which explains the ease of communication and the stories.  There is certainly no clear evolutionary narrative that provides the merman option.

Clearly no intelligent species ties itself to the home planet at all and large ships go with the whole space meme.

Here is an interesting account I first became aware of several years ago:

One day in 1995 at mid morning a local resident of Sudak in the Crimea named Georgiy, walked to an embankment on the Black Sea for a breath of sea air. With a goblet of beer with him he stepped down to the sand and watched the horizon. It was a calm and beautiful day. Suddenly something sneaked up to him from behind and put a rubber mask on his head, Georgiy struggles and grabs the mask under his chin and pulled it off, thinking it was some kind of stupid prank. But in the next second he found himself amid a huge hall, he could neither see the sea or beach or sky. There were huge screens on the walls, multitudes of various control panels with buttons and chairs in front of them. When he looked down, he saw that he was holding a rubber mask resembling that of blue reptilian “monster”, skin like a lizard, covered with warts.

Suddenly a door opened in the wall and three “monsters” entered the room. These resembled very much the face on the mask he was holding. They were tall, about 2 meters in height, blue in color, all covered entirely by warts; they were nude and were “awful” in appearance. One of them approached Georgiy and put his hand on his shoulder (the alien had three huge curved clawed fingers on his hand) and said in a low hoarse voice “Homo Sapiens”. Georgiy could see huge yellow fangs in his opened mouth. After that, seized by a terrific panic Georgiy began to scream, he jerked back, threw the mask on the floor and ran away. He entered a corridor and passed numerous oval doors, different screens and instruments. Overwhelmed by fear he ran into another room and there he was confronted by another blue reptilian humanoid. The humanoid opened his huge arms on his sides and said, “Where are you running to”?

After that he pressed something on the wall and Georgiy saw what he called an “abyss”, endless space everywhere. He could see stars and beautiful scenes in space. He was trembling with fear when one of the blue reptilians approached him took his hand and said, “Do not be afraid”. He then accompanied the witness to the next room. In that room he saw hundreds of reptilian humanoids standing in ranks. All were standing shoulder to shoulder and all were looking at the witness. Suddenly they moved aside and the witness saw a beautiful woman with light hair, sleeping on a small sofa, she was totally naked. He saw her for several seconds and after that the blue reptilians close ranks again and she disappeared from sight. The alien then accompanied Georgiy to a screen. There were stars on the screen. The reptilian pointed with his claw at one of the stars and said, “Earth”. After that he embraced the witness with his powerful three-fingered hands and said, “Stay with us. We have no time and death.” Terrified Georgiy could only say that he wanted to go back home, that his mother was waiting for him and begged them to let him go. The alien then said, “Well then is there anything you want to know?” Georgiy could only think of one thing at that point, “How long will my mother live”? The alien answered, “As much as your age now”. After that the star on the screen began to approach very fast and began to resemble the globe of earth, he could see clouds.

Suddenly Georgiy realized that he was standing near his house, but only in the opposite direction from where he had originally left. He had been gone for 5 hours. He noticed a peculiar detail; the coins in his pocket began to glow with a yellowish light when he took them out. This light disappeared in the morning.

Source: Anton Anfalov quoting B. V. Ustinov in “The Secret Doctrine” / forwarded by Albert Rosales
NOTE: Albert Rosales commented "Interesting report involving possible reptilians abducting a human. Who was the woman he reportedly saw sleeping on the sofa?" Was the woman another abductee used to lure Georgiy to stay with them. Much of the information I have gathered on the reptilian species, including David Eckhart's accounts, tends to paint them as a very intolerant bunch that have little patience for humans. As well, they usually grab what the want and give little care as what happens to those they abduct. BTW, there are 'mermen' stories and legends throughout the regions next to the Black Sea, including the Crimea. Could these 'mermen' really be reptilian beings? Lon
Posted by arclein at 12:00 AM