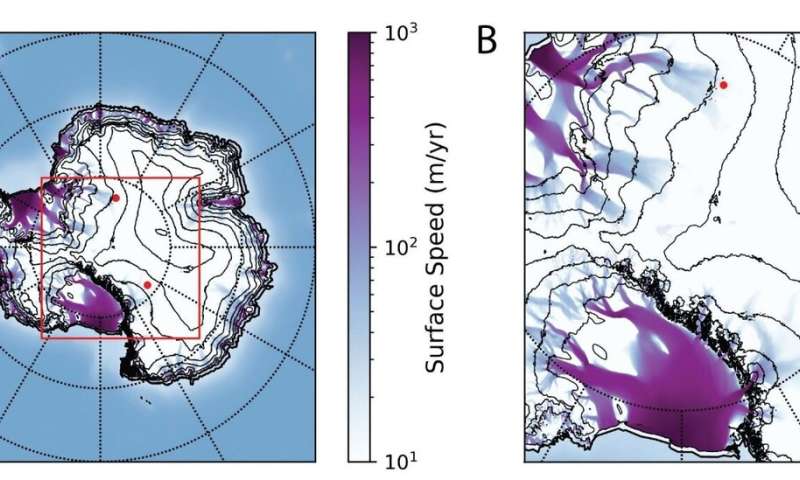 This is a pretty reasonable explanation.  It gets rid of exotic explanations and uses what we do know.

Of course, my Cloud  Cosmology happens to posit the plausible existence of a neutrino core in the sun and also the earth acting as a matter creation core.  Obvious output would include high energy neutrinos.

an actual neutrino core would subsume low energy neutrinos but also throw off high energy ones.
.
Whatever happens though such a construct will produce odd data at the poles.

A map (left) and zoom-in (right) of Antarctica, displaying the two anomalous upward-pointing events -- represented by red dots -- observed by the ANITA experiment, overlaid with surface ice speed (represented by purple/blue coloring) and 500-meter surface elevation contours. The top red dot represents the anomaly recorded in 2018, while the lower dot represents the anomaly recorded in 2016. Both events lie in low surface ice-speed and high-elevation of 1.86 to 2.17 mile regions, according to Shoemaker. Credit: Ian Shoemaker.

A new research paper co-authored by a Virginia Tech assistant professor of physics provides a new explanation for two recent strange events that occurred in Antarctica—high-energy neutrinos appearing to come up out of the Earth on their own accord and head skyward.

The anomalies occurred in 2016 and 2018 and were discovered by scientists searching for ultra-high-energy cosmic rays and neutrinos coming from space, all tracked by an array of radio antennas attached to a balloon floating roughly 23 miles above the South Pole. Neutrinos are exceedingly small particles, created in a number of ways, including exploding stars and gamma ray bursts. They are everywhere within the universe and are tiny enough to pass through just about any object, from people to lead to buildings and the Earth itself.

The events were discovered by scientists at the ANITA experiment—that's short for Antarctic Impulsive Transient Antenna, started in 2006—in the South Pole. Twice, ANITA scientists discovered radio signals mimicking highly energetic neutrinos seemingly coming upward out of the ground on their own accord. Scientists remain perplexed by the activity, with some 40 papers so far giving wildly different answers—the pulses are neutrinos that passed unencumbered through the entire core of Earth and came out of the ground; the pulses are the long sought-after "fourth" neutrino known as the sterile neutrino; the mysterious "dark matter" of space is to blame; or this is an entirely unknown frontier of particle and/or astrophysics physics begging for a Nobel.

Ian Shoemaker, an assistant professor in the Department of Physics and the Center for Neutrino Physics, both part of the Virginia Tech College of Science, has a different, simpler explanation. In a recent paper published in the journal Annals of Glaciology, Shoemaker and several colleagues posit that the anomalies are not from neutrinos, but are merely unflipped reflections of the ultra-high-energy cosmic rays that arrive from space—miss the top layer ice—then enter the ground, striking deep, compacted snow known as firn.

"We think sub-surface firn is the culprit," said Shoemaker, adding that "firn is something between snow and glacial ice. It's compacted snow that's not quite dense enough to be ice. So, you can have density inversions, with ranges where you go from high density back to low density, and those crucial sorts of interfaces where this reflection can happen and could explain these events."

Shoemaker was joined on the paper by his former Ph.D. advisor, Alexander Kusenko of the University of California Los Angeles' Department of Physics and Astronomy; Andrew Romero-Wolf, a member of the ANITA team and a researcher at the California Institute of Technology's Jet Propulsion Laboratory; and four other researchers, including two glaciologists: Dustin Shroeder from Stanford University and Martin Siegert from Imperial College London.

Call it a case of Occam's razor (that's the centuries-old theory that the simplest solution in most likely the correct one, for those who skipped philosophy in college), but Shoemaker isn't railing ANITA. "Whatever ANITA has found, it is very interesting, but it may not be a Nobel prize-winning particle physics discovery." But he's not discounting that the so-called anomalies have no scientific merit. "ANITA still could have discovered something interesting about glaciology instead of particle physics, it could be ANITA discovered some unusual small glacial lakes."

Sub-glacial lakes were another consideration by Shoemaker and his team for the reflections. These lakes, deep underground, though, are too far spread apart according to current research, and hence are not the most likely explanation. But if there are far more lakes than previously known, this discovery would be a big win for scientists who study the landscape and interior of Antarctica. Shoemaker and his team suggest scientists purposefully blast radio signals into the areas where the anomalies occurred.

"I didn't know anything about them, but they really do exist," Shoemaker said of sub-glacier lakes in Antarctica. "There are lakes under the ice in Antarctica, and those would have the right reflective properties, but they're not widespread enough. Our idea is that part of the radio pulse from a cosmic ray can get deep into the ice before reflecting, so you can have the reflection without the phase flip. Without flipping the wave, in that case, it really looks like a neutrino."

Shoemaker added that, "When cosmic rays, or neutrinos, go through ice at very high energies, they scatter on materials inside the ice, on protons and electrons, and they can make a burst of radio, a big nice radio signal that scientists can see. The problem is that these signals have the radio pulse characteristic of a neutrino, but are appear to be traversing vastly more than is possible given known physics. Ordinary neutrinos just don't so this. But cosmic rays at these energies are common occurrences and have been seen by many, many experiments."
Posted by arclein at 12:00 AM