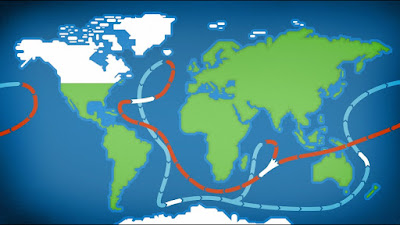 I want to consider something.  We  know that a global current system redistributes heat all around the globe in an orderly fashion.  We can also conjecture that gross adjustments are made slowly through the circumpolar current whose mass amplitude likely adjusts slowly over a thousand year cycle.

This means that the South altlantic will face a surge or even a decline every thousand or so years.  This significant change is correctred by the atlantic current in echange with the Arctic.  This can be reflected as a drop in total heat in the Gulf Stream and this then is  the only real adjustment tool to correct a global heat imbalance.

We Have the Little  Ice Age around1100 years after the similar fifth century Roman collapse.

These are only two data points but the shift in ocean current mass seems likely enough.

It is also big enough to rectify the global heat engine by fine tuning through the gulf stream.