Can 'Healing Aliens' Be Summoned At Will? 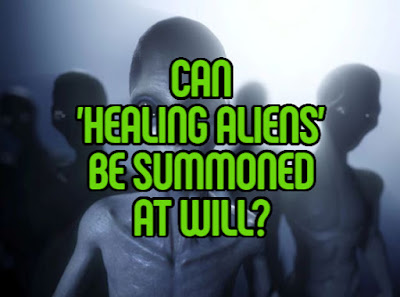 This describes a healing experience guided by an advanced spirit being.  Imagine we could do this as well..  One can percieve the existence of method, perhaps directed aspects of the spirit body making use of celllular components of its spirit.

It would be an effective way to eliminate a pervasive disease within the body.

This  certainly shows me more than i had imagined.

Can 'Healing Aliens' Be Summoned At Will?

A woman is going through several negative life experiences, when she is confronted by an unknown 'energy' or entity that continues to manifest in order to help her heal.

The following account was forwarded to me by a reader:

"This happened a number of years ago. I was in a terrible state of mind, because I had just left a relationship that had basically brainwashed me into not knowing who I was at all. I moved back to my parent's house and could barely socialize. I spent all my time meditating because I didn’t know what else to do, I just wanted to get better. A bunch of crazy things happened during this time and I went through a huge transformation, but I’ll just explain the alien bit.

I was laying in bed, during daylight hours, basically “praying.” I remember mentally calling out to any beings who wanted to genuinely help me to come to my aid. Suddenly my face became the face of what looked like an alien. To me it seemed like a fairy-like being. It had the traditional face shape of an alien with super big eyes, not much of a nose but it wasn’t ugly at all. It was pulsing with a swirling pink energy, and it felt extraordinarily beautiful, magical and loving. It was like I became this being, or rather this being became me/took over my consciousness yet we were still in a sense separate. Then, very clearly I heard a high-pitched slightly feminine voice speak in my head. It said, “now we are going to heal you, with bubbles!” Then suddenly thousands or millions of the same being that was inhabiting my face coursed through my body, like tiny versions of this being were pulsing through me, still with swirling pink light. It was like they were of a collective consciousness all together, but there was one main being who spoke first who was leading them (I think).

As they coursed through me, I physically felt small bubbles in my body being popped, as if there were bubbles of energy that were being released over and over again. It felt amazing. After a little while the beings left me. It felt as if they rose out of me and kind of got suctioned away.

At this point I was super sad, almost heartbroken that they had left. So I begged them to come back. And they did! The alien/fairy became my face again and once again I felt this amazing source of love and magic. Then they left for good.

Since then I still experience the same sort of energy bubbles in my body popping - usually when I meditate or do reiki on myself, but nothing to the extent of that experience.

I never really considered these beings to be related to the grays or as an alien encounter until now. At the time it felt like they were coming from a different dimension, and they felt completely loving and wonderful.

Has anyone else had any positive experiences or anything like this happen to them?" GV

NOTE: I'd like to know your thoughts on this experience. Is it possible to 'summon' healing energy or entities capable of healing? Where these entities alien or another type of metaphysical manifestation? LMK. Lon
Posted by arclein at 12:00 AM