In 1979, China Was Crushed in a War with Vietnam. What Happened Next Is Shocking. 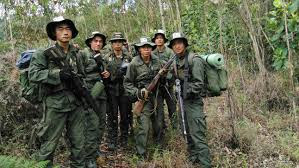 The initial incursion by China in 1979 was roughly handled by the Vietnamese army and soon ended with thousands of cadsulties.  I had actually thought that was largely it.

Turns out that hte PLA continiued incusions at the bridage and division level for over ten more years.  It is clear that the incentive was to actually train their own troops.  Like having an unwilling sparring partner.

All this means that the PLA does have a cadre of battle hardened NCOs from that era and obviously a much improved training doctrine.

I now strongly suspect that they are trying to trigger a border conflict on the Indian border around Khasmir.  They have moved around half a million men into lands actually accepted as Indias.

The geography may make this impractical for India, but this remains to be seen.  It is troubling because of the recent chinese engagement with Pakestan.  All this allows meddling and may force India to establish massive forces of its own in those same mountains while also having to counter Pakistan..

At the same time it opens the door for extending an USA air umbrella to India which is not helpful to the Chinese position.

The good news is that they have stopped meddling on the Vietnamese border since 1991 which is already thirty years past..


In 1979, China Was Crushed in a War with Vietnam. What Happened Next Is Shocking.
One word: reform.


Overall, while the Sino-Vietnamese border wars might have seemed insignificant, they proved to be an effective testing ground for the PLA’s reforms. Trials by fire in the Laoshan sector allowed the PLA to grow a new cadre of forward-thinking leadership. New technologies and organizational structures were also trialed and reformed, and combat experience was gained that lead to the creation of Chinese SOF. In one Chinese general’s words, the border conflict “allowed him to achieve his dream of waging modern war by modern methods.” The Sino-Vietnamese border conflict of 1979 to 1990 can be seen as the crucible in which the modern PLA was born, reformed from the lumbering army that attacked Vietnam in 1979.

When the Sino-Vietnamese war ended on March 16, 1979, it was hardly a definite resolution of the conflict. Both sides claimed victory, and Vietnam continued to pressure China’s allies in Cambodia and Thailand. As a result, the PLA continued to apply pressure to Vietnam by launching attacks across the Vietnamese border throughout the 1980s. While casualties were small relative to the tens of thousands who died during the 1979 war, the regimental and divisional scale operations across the border incurred significant casualties on both sides.

Chinese operations against Vietnam in the 1980s are often divided into four phases. In the first, the Chinese and Vietnamese further entrenched their positions along the border. This lasted until 1981. The second and third phase consisted of escalating offensive operations across the border from 1981 to 1987, gradually increasing in intensity. The last phase involved the PLA’s withdrawal from the border region. The political objectives of the Chinese incursions were to “punish” Vietnam for its continued belligerence towards Thailand and Cambodia. Since Vietnamese troops were going into Cambodia, Chinese troops would continue to do the same. Militarily, China saw the border conflict as a way to evolve the PLA from an antiquated fighting force to a modern one, by testing new doctrines and equipment on the border.
Posted by arclein at 12:00 AM