The French Monarch in prophecy 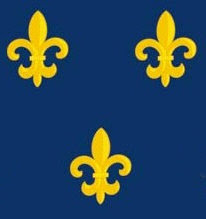 I have  a lot of material to draw upon regarding prophecy.  It is all interesting.

The big problem first is the MEME of the great French monarch who fully restores the CHURCH.

First off once again, this language was used during an era of dominance for the Roman Catholic Church itself and of the French King.

The proper equivalent today would be the acknowledged 'MONARCH of all of EUROPA and the CHRISTIAN CHURCH.

Today we are literally one step away in Putin and the prospective merger of the Othodox and Roman Churches sans hiearchy and  the implimentation of the RULE of TWELVE perhaps.  EUROPA is ready for a MONARCH.  The world itself has CYRUS in Trump and just now he has finalized full authorities.  Xi may be the emperor of China but he is riding the CCP dragon.

There is a lot more to talk about and share but there is certainly plenty of symbolism throughout....

(Minneapolis) -Oct 17- On this, the feast of the holy French nun St. Margaret Mary Alacoque, who was renowned for her love and promotion of devotion to Du Sacré Coeur (The Sacred Heart) - In Today's Catholic World (TCW) is reprinting Yves Dupont's World Trends Newsletter titled: More About the Great Monarch and the Glorious Age of Peace to Come Under the Reign of the Great Monarch (minus a few introductory lines by Mr. Dupont). The Editor of TCW believes the reign of the prophesied Great Catholic Monarch will occur in his own lifetime (sooner rather than later). Please note that Mr. Dupont (an expert on Catholic Prophecy) wrote this piece for his newsletter World Trends Issue #41 in August, 1974 A.D.

It is also important to note, that he clearly states in the major events/signs to watch just prior to the coming of the Great Monarch (according to the thousands of prophecies he had studied) that there would be (2nd Section Point 3): An anti-pope in Rome. The developing apostasy becomes universal. (Note: All pictures and captions were added by TCW.)

[...] Some of the prophecies given here have already been cited in my book "CATHOLIC PROPHECY" in which I gave a general picture of the coming upheaval. The present article bears more specifically on the glorious Age of Peace to come, under the reign of the Great Monarch. For this reason, I do not propose to quote at length the prophecies of my previous book but only the passages relating to the Age of Peace and the Great Monarch.

Many of these prophecies are French, and they make it quite clear that Monarchy will be restored in France. But the restoration of Monarchy will not be a local affair; it will be a world-wide phenomenon. This will mark a near historical epoch and, because of this, many people are finding it hard to believe. The age of republics and Democracies will be over, Communism and Socialism a thing of the past. This age of peace will also be an age of belief and an age of plenty. It will mark the victory of the Immaculate Heart of Mary and of Christ the King, the revaluation of authority and discipline, and the conversion of the entire world to the Catholic Faith - (except for a few pockets of unbelief).

These conclusions have been drawn from my study of private prophecies which I began about 30 years ago. These prophecies were made from the very beginning of the Christian Era up to our own time. They originate from virtually every country in the world) non-Christian lands included. The concordance existing between hundreds of different prophecies is truly remarkable. It would be unreasonable to claim that the bulk of these private seers were merely repeating earlier prophecies which they had themselves read. Such a claim is untenable for a number of reasons: firstly, because communication between various countries was very limited prior to the 19th Century. Secondly, because all writings were in manuscript form before Gutenberg evolved the printing press in the 15th Century. Thirdly, because some of these prophecies were discovered many centuries after they had been written.

In a few cases, however, it is known that some prophecies were not made by those who handed them down; and in other cases it is not inconceivable that an old manuscript may have repeated the substance of an earlier one. Thus, the wording of St. Remy's prophecy, so strikingly similar to that of St. Augustine, may be just relating what St. Remy had heard or read from the writings of St. Augustine which, even in his life-time, were reproduced in manuscript form in the monasteries of Western Europe. St. Augustine died in 430, and St. Remy was born in 437. In his youth, St. Remy would have been conversant with the writings of St. Augustine. Such cases are few in number. But the final argument lies in the fact that many of the early prophecies have already come to pass in part. Here are some events that were predicted long ago: