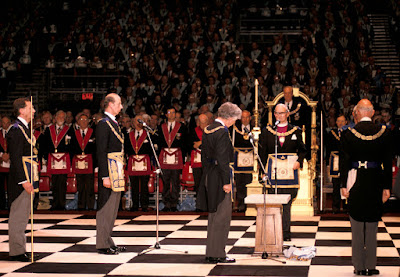 This is an interesting piece and acts as an introduction to the meme.  It is not the draw it was in our past, but still exists.  The movement serves as gathering mechanism and training facility for leaders at all levels of society.  Yet the central fact is secrecy and loyalty.

What we must understand is that the 33 levels are the public face and allow the possibility of grooming and selection for an alternative agenda.  Thus we have rumored higher levels.

At the same time we now have ample evidence of a similar infection inside the Catholic Church.

What is central to all this is that such long term social platforms are able to facilitate criminal conspiracies simply because they can sort out criminals able to conspire with other criminals.

We at least now know.

In the meantime we are all taught to dismiss all the claims.. .

Many believe the Freemasons are simply a centuries-old charitable fraternity. However, the Catholic Church has consistently condemned Freemasonry more than any other error in its history because it promotes indifferentism, naturalism, communism, and other dangerous philosophies.