General Mattis Has Betrayed the Marines and America 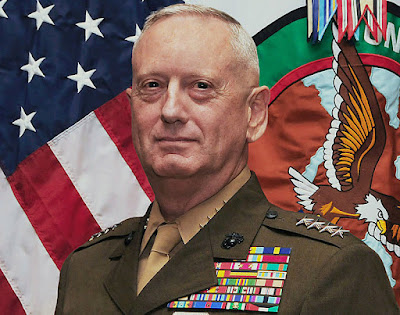 Here i will let Gorka say what i think about Mattis and say nothing else about his statements..

His career saw active service in the last years of Vietnam as the US involvement wound down.
This was as a newly minted young officer and we do not know the details. Then They were at
peace until he was forty and the first Gulf war happened. That lasted 4 days.

The only reason i tell this is that there was only one good place to earn gung ho nicknames
during his career and that was mostly in training. Otherwise he was highly regarded even for
a reading list.

His political judgement was certainly never tested and i see no evidence of him getting it right..


General Mattis Has Betrayed the Marines and America

Yes, Mattis is wrong. But more than that, he is a moral coward.

I’m not a Marine, but I know the Marines. With 12-and-a-half years teaching the U.S. military under my belt, I can sincerely say, hand on heart, that the two-and-a-half years I spent at the “Crossroads of the Corps,” teaching at the Marine Corps University in Quantico, were the most meaningful and fulfilling of all. What I learned there leads me to the ineluctable conclusion: Jim Mattis is no Marine.

“Mad Dog” may have worn the uniform of a leatherneck for more years than most, but he has betrayed the values of the Corps by his recent statements about the sitting commander-in-chief. He is no longer one of “the Few, the Proud,” having accused President Trump of somehow violating “the Constitutional rights of . . . fellow citizens” by walking to St. John’s Episcopal Church the day after “peaceful” protestors tried to burn the church to the ground. It’s the same church that every incoming president of the United States has stopped to pray in and show his respects on the morning of his inauguration.

Do I have a right to criticize a man like Mattis? A man allegedly called “Mad Dog” and “Chaos” by his peers? No, I never served in the U.S. military. My only military experience is a few years in the British Army reserves. Once I came to America, however, I twice took the oath of service to my new nation. Once when I joined the Defense Department as a civilian, and then again in 2017 when I joined the White House as a strategist to President Trump.

And even if none of that were true, I would still feel a duty publicly to censure Mattis for a personal reason: because of what I learned from the Marines I have worked for and with over the years. Their love of America and their respect for the truth demand that we react to such reprehensible behavior from a retired general officer who knows better.

Mattis gave his holier-than-thou “statement” to the rabidly anti-Trump platform The Atlantic, which in and of itself is more than strange given that he was a sworn officer of the Trump Administration—a member of his cabinet—as President Trump’s secretary of defense. Did he not know who he was going to work for when he agreed to be his secretary of defense? And why did the condemnation of his former superior, the commander-in-chief appear now, exactly at a time which is so advantageous for the political forces that wish to see the president weakened just months before the election?

Here I could devote paragraphs to my experience of the general and flag officer corps during my time in the Department of Defense and White House. I might tell you how the Clinton, Obama, and even Bush Jr. years fostered an environment of political generals and admirals driven more by groupthink and Beltway conformity than a duty to professional standards of conduct and the truth. But Mattis’s sin is far more egregious than just being a politically motivated “yes man.” He has betrayed the ethos of the Corps.
Posted by arclein at 12:00 AM