Anti Christ and Church by Dillon chpt 1 GOOD VERSUS EVIL 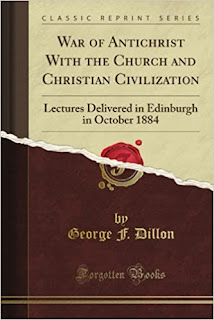 I will be piecing this book out over the next few weeks.  It was published around 1900 and was powerfully endorsed by the Pope Leo XIII.  I have dismissed secret societies and all that as irrelevant to our modern world all my life.  I was taught to do this and  left it at that.

The purpose of a secret society is to protect secrets and soon enough criminal secrets.  Our recent understanding of the true extent of the global pedophile conspiracy came as a shock and of course their grooming system would mean hijackinhg the secret society system at the least and more recently it appears the hiearchy of the Catholiic Church..

It was certainly originated to support their criminal appitites and drive for power.

A lot of this makes unplesant reading simply because most men are naturally of good will and tend not to believe that an alternative even exists.  Discovering that they truly exist is a shock.

Anti Christ and Church by Dillon

SPEAKING of the operative classes, Leo XIII says, in his celebrated Encyclical Humanum Genus: "Those who sustain themselves by the labour of their own hands, besides being by their very condition most worthy above all others of charity and consolation, are also especially exposed to the
allurements of men whose ways lie in fraud and deceit.

Therefore, they ought to be helped with the greatest possible kindness, and invited to join societies that are good, lest they be drawn away to others that are evil."

In this, as in all matters of importance, "to be forewarned is to be forearmed," and it is specially necessary to be forewarned when we have to contend with an adversary who uses secrecy, fraud and deceit. We shall see then, that all the organizations of Atheism appear at first as does their author, Satan, clothed in the raiment of angels of light, with their malignity, their Infidelity, and their ultimate
designs always most carefully hidden. They come amongst all the faithful but more especially amongst young men, to seduce and to ruin them, never showing but when forced to do so, the cloven foot, and employing a million means to seem to be what they are not.

It is, therefore, first of all, necessary to unmask them; and this is precisely what the Supreme Pontiff asks the pastors of the Universal Fold to do as the best means of destroying their influence, "But," he says in the Encyclical already quoted, "as it befits our pastoral office that we ourselves should point out some suitable way of proceeding, we wish it to be your rule, first of all, to tear away the mask from Freemasonry, and to let it be seen as it really is, and by instructions and pastoral letters to instruct the people as to the artifices used by societies of this kind in seducing men and enticing them into their ranks, and as to the depravity of their opinions and the wickedness of their acts."

In this extract the Holy Father makes special mention of Freemasonry; but, remember, not of Freemasonry only. He speaks of "other secret societies." These other secret societies are identical with Freemasonry, no matter by what name they may be called; and they are frequently the most depraved forms of Freemasonry. And though what is known in Great Britain as Freemasonry may not be so malignant as its kind is on the Continent—though it may have little or no hold at all upon the mass of Catholics in English-speaking countries, still we shall see that like every secret society in existence it is a danger for the nation and for individuals, and has hidden within it the same Atheism and hostility to Christianity which the worst Continental Freemasonry possesses. These it develops to the initiated in the higher degrees, and makes manifest to all the world in time.

The truth is that every secret society is framed and adapted to make men the enemies of God and of his Church, and to subvert faith; and there is not one, no matter on what pretext it may be founded, which does not fall under the management of a supreme directory governing all the secret societies on earth.

The one aim of this directory is to uproot Christianity, and the Christian social order as well as the Church from the world—in fact, to eradicate the name of Christ and the very Christian idea from the minds and the hearts of men. This it is determined to do by every means, but especially by fraud and force; that is by first using wiles and deceit until the Atheistic conspiracy grows strong enough for measures as violent and remorseless in all countries as it exercised in one country during the first French Revolution.

I believe this secret Atheistic organisation to be nothing less than the evil which we have been long warned against by Our Blessed Lord Himself, as the supreme conflict between the Church and Satan's followers. It is the commencement of the contest which must take place between Christ and Antichrist; and nothing therefore can be more necessary than that the elect of God should be warned of its nature and its aims.


First we shall glance at the rise and the nature of Atheism itself and its rapid advance amongst those sections of Christians most liable from position and surroundings to be led astray by it; and then at the use it has made of Freemasonry for its propagandism, and for its contemplated destruction of Christianity. We shall see its depravity perfected by what is called Illuminism. And we shall see that however checked it may have been by the reaction consequent upon the excesses of its first Revolution, it has not only outlived that reaction, but has grown wiser for doing an evil more extended and more complete.

We shall see how its chiefs have succeeded in mastering and directing every kind of secret association whether springing from itself or coming into existence by the force of its example only; and have used, and are using them all to its advantage. We shall see the sleepless vigilance which this organized Atheism exercises; and thus come to know that our best, our only resource, is to fly its emissaries, and draw nearer in affection and in effect to the teachings of the Church and her Supreme Visible Head on earth who can never deceive us, and whom the hosts of Satan never can deceive. We shall see that the voice of the Vicar of Christ has been raised against secret associations from the beginning to this hour, and that the directions which we receive from that infallible voice can alone save us from the wiles and deceits of a conspiracy so formidable, so active, so malignant, and so dangerous.