Could Tesla Reveal A 700-Mile Model 3? New Battery Tech May Make This Possible 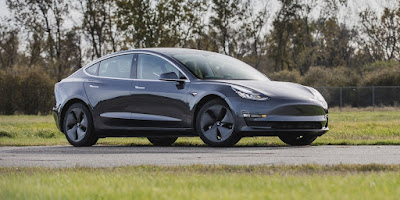 What we have is good enough and that is why the electric now has real traction.  The next stage is a simple doubling of capability because that then sets the stage for the full replacement of the whole hydrocarbon power system worldwide.  That is why this is important.

I first got interested in the whole process back in the eighties no less with freinds of mine.  The EV was always highly feasible and also highly desirable.  Yet it was always about the battery.  It has taken two generations of dedicated effort to get to now.  It is really happening and the jump to a full EV fleet will seem almost overnight.

The whole automotive industry is gearing up for5 this as it is no longer a case of if but which model year is it all gone for the oil crowd.

Could Tesla Reveal A 700-Mile Model 3? New Battery Tech May Make This Possible

The focus seems to be on the million-mile battery, but what if Tesla surprised us with a 700-mile EV?

Would a 700-mile Tesla Model 3 be an absolute game-changer? Do we need an EV with that much range? Could Tesla really make such a car? Let's explore all of this for a bit.

With Tesla Battery Day reportedly around the corner now, the focus of late has been on the million-mile battery that Tesla may well reveal. While such a battery would surely be big news, what if Tesla has something else up its sleeve, like a mega energy-dense battery that will extend range significantly while at the same time dropping production costs? This would for certain be even bigger news than a battery that lasts a million miles.

This video explores the possibility of Tesla revealing a battery that combines longevity with a very low cell cost and extremely high energy density. If it came to be, the video predicts Tesla could have a Model 3 with some 700 miles of range. We think this figure is far too optimistic, but even pushing the Model 3 past 400 miles would be an amazing achievement.

Since it's a smaller car, we don't think the Model 3 will be able to carry enough battery to go 700 miles at any point in the near future, but perhaps the Model S, Model X or the upcoming Tesla Cybertruck could carry such a high range battery pack.

Even today, the Model S goes 400 miles on a charge and that's with battery tech that in some ways dates back to 2012, so imagine what would happen with today's breakthrough battery tech in the Model S.

One thing is for certain, all eyes will be on what Tesla reveals on Battery Day, which will likely occur as a two-part event with the first coming very soon:

We’re going to have to push out the date or attendance will be very low. Maybe do in two parts: webcast next month & in-person event a few months later?

Check out the video above, which details many of the battery-related Tesla announcements that have occurred over time and then concludes with the idea of a 700-mile Model 3, then let us know in comments your thoughts on this, as well as what you think Tesla will reveal at Battery Day.

With Tesla's Battery Investor Day approaching, it's no secret that Tesla is going to manufacture its own battery. In this video I discuss everything we know about Tesla's new battery and estimate the specs of Tesla's new battery.